Alltel Stadium in Jacksonville, Florida was host to Super Bowl XXXIX. The event took place on February 6, 2005.  The contest would see the New England Patriots battle the Philadelphia Eagles. This would be the Patriots' third Super Bowl appearance in four years. It was the Eagles' second appearance in franchise history. With this game, the Patriots looked to solidify themselves as a football dynasty akin to the Dallas Cowboys the previous decade.

The Lead-Up to Super Bowl XXXIX

Both New England and Philadelphia had dominant seasons going into the postseason. The Patriots finished with a 14-2 season while the Eagles finished 13-3. The Patriots became one of eight teams to ever make it to the Super Bowl over five times.

Both teams had their share of woes going into the game. Eagles wide receiver Terrell Owens had suffered an ankle injury earlier in the season. It was doubtful he would play, but was able to defy the doctor’s orders and take the field with screws in his ankle. Other injuries caused the team to have to shake up their team’s lineup as the season went on.

New England also had their share of trouble. Coaching changes were coming as both their defensive and offensive coordinators would be leaving the team at the end of the year. There were worries on how the potential changes in the 2005 season would affect the team in the coming game.

The Eagles had come up short in three previous AFC Championship games before earning their shot at the Lombardi Trophy. Quarterback Donovan McNabb finished the season 300 of 469 passes for 3,875 yards with 31 touchdowns and 8 interceptions. His preferred target was wide receiver Todd Pinkston who made 38 catches for 676 yards. One of their offensive weaknesses was their rushing game, though reliable running backs Brian Westbrook (812 yards and 3 touchdowns) and Dorsey Leven (410 yards) were an important presence on the field.

Tom Brady returned to the Super Bowl for the third team at the lead of the Patriots. He completed 288 of 474 passes for 3,693 yards with 28 touchdowns and 14 interceptions.  Wide receiver  Deion Branch missed most of the regular season due to injury but scored 4 touchdowns for the team upon his return. Patriots acquired running back Corey Dillion who would prove to be an important addition to the offense. Returning offensive players David Givens (56 catches and 3 touchdowns), David Patten (44 receptions and 7 touchdowns), and Daniel Graham (30 receptions and 7 touchdowns) rounded out the offense.

The Patriots saw a shakeup in their defense due to injuries. Both Tyrone Pool and Ty Law were out for the game. As a result, Randall Gray, Asante Samuel, Earthwind Moreland, and Troy Brown were promoted to starting positions. Even with these shake-ups in the lineup, the Patriots were still a force to be reckoned with.

After Super Bowl XXXIX the Patriots would become the most recent team to win back-to-back Super Bowls. They would also be the second team after the Dallas Cowboys to win three Super Bowls in four years.

On February 6, 2005, Alltel Stadium welcomed 78,125 fans to watch the clash between New England and Philadelphia. Fans paid an average of $600 per ticket, a $200 increase from the previous year. In today’s money, they would pay $802 for a seat at the game.

Former Presidents George H.W. Bush and Bill Clinton participated in a presentation to encourage donations for relief of the tsunami that ravaged Southeast Asia in 2004.

This year’s coin toss ceremony was unique in that it was the first time that non-celebrities participated in the event. Instead, four youth players from Jacksonville were on hand: Tyler Callahan, Tyler Deal, Lawrence McCauley, and Jacob Santana. Also with them was New Orleans NFL Junior Player Development coach Tamaris Jackson. The Eagles would win the opening coin toss with a call of tails.

On the first drive of the game, William McGinest strip-sacked McNabb. The ball was recovered by the Patriots at the 34-yard line, but the ruling was overturned when it was shown McNabb was down before the ball left his hands. A 30-yard pass to Terrell Owens put the team in scoring positions. However, McNabb was intercepted by Rodney Harrison in the Red Zone. The Philadelphia defense forced New England to a three and out and put the Eagles in good field position at the New England 45-yard line. However, L.J. Smith fumbled the ball allowing for a turnover recovery by Eugene Wilson at the 38-yard line.

The Eagles defense was again able to hold off New England and forced them to punt. McNabb was able to fire off a series of completions to Todd Pinkston and allow for a short 9-yard touchdown pass to L.J. Smith. The Eagles took the lead at 7-0. Running back Corey Dillon ran the ball deep into Eagles territory to attempt to answer the scoring drive. However, Brady fumbled during a hand-off fake and it was recovered by defender Darwin Walker. Philadelphia was unable to take advantage and were forced to punt the ball away. With 1:10 remaining, David Givens scored on a 4-yard pass, tying the game at 7-7 as the first half ended.

After the controversy of the previous year’s halftime show, the NFL chose former Beatle Paul McCartney as a “safe choice” for the halftime show. He performed several of his hits from the Beatles including “Drive My Car”, “Get Back”, and “Hey Jude” as well as his hit from the band Wings, “Live and Let Die”.

Deion Branch caught 4 passes for 71 yards in the opening drive of the second half. This allowed for Brady to throw a short pass to Vrabel for a touchdown and the lead 14-7.  With 3:39 the Eagles would tie the game once again with a 10-yard pass to Brian Westbrook.

The Patriots started the fourth quarter with a 9-play scoring drive led by Kevin Faulk. Dillon would complete a 2-yard run to take the lead 21-14. After the Eagles were forced to punt, Deon Branch snatched the ball from the hands of cornerback Sheldon Brown. The 19 yard gain along with a roughing penalty on the Eagles put the Patriots in field goal range. Adam Vinatieri kicked a 22-yard field goal, increasing their lead 24-14 with 8:43 left to play. McNabb threw a long completion to Owens, but a later pass to Dorsey Levens was intercepted by Tedy Bruschi. New England was forced to punt, and the Eagles had another chance to score. McNabb was able to throw a 30-yard touchdown pass to Greg Lewis, closing the gap 24-21.

With only 1:48 left in the game, New England forced Philadelphia to use all of their time outs, leaving them with little time left when they regained possessions. With second remaining, McNabb threw a deflected pass to Smith, which fell into the hands of Harrison. Brady took a knee to allow the last few seconds to tick away, and New England won 24-21.

Patriots receiver Deion Branch earned the MVP award for Super Bowl XXXIX. He led his team to victory in the game with his amazing presence and drive through the game. 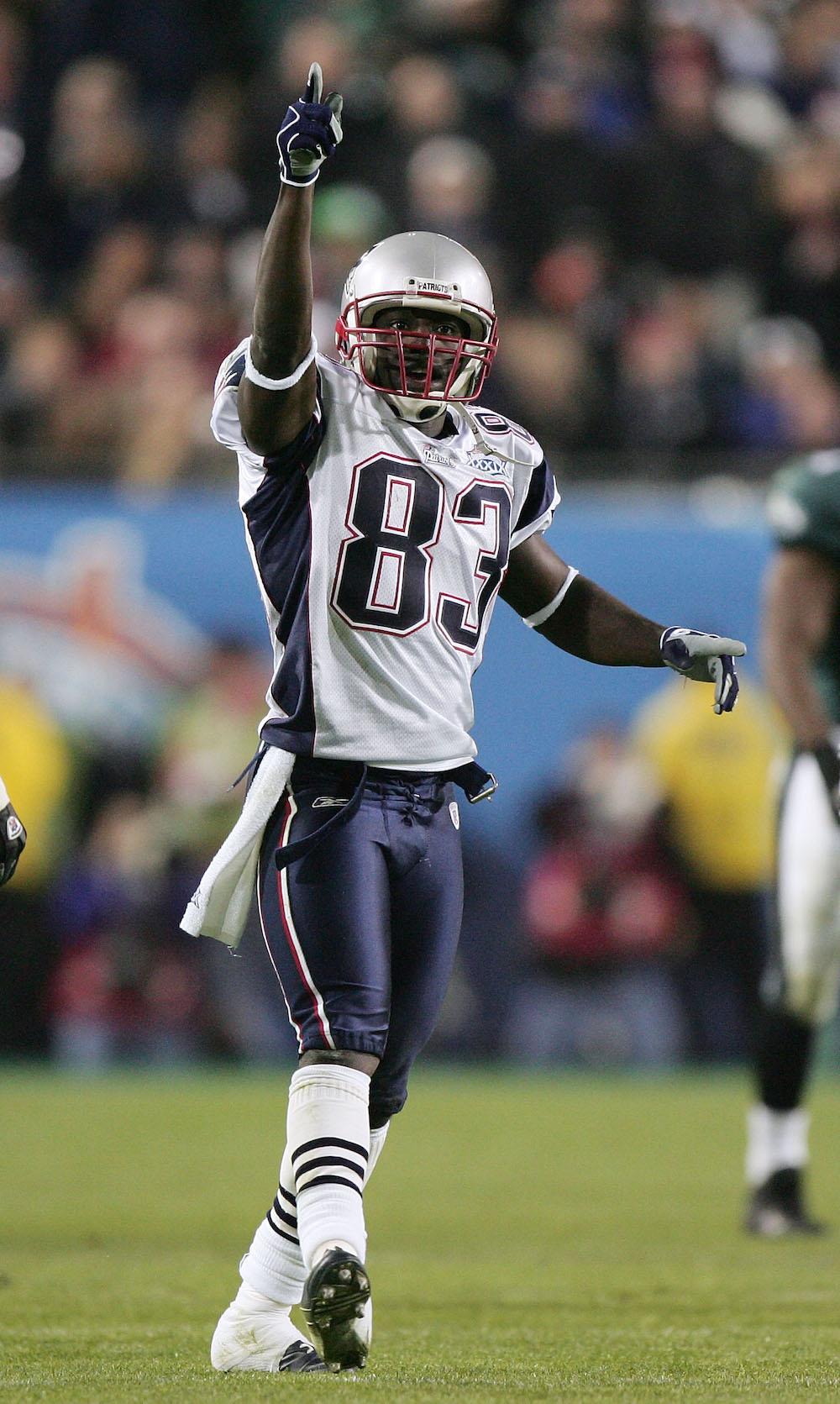 While he did not score any touchdowns himself, Branch did tie the record for most receptions in a Super Bowl with 11.

A popular ad that year was for the internet domain provider GoDaddy. The ad poked fun of the previous year’s halftime show with a mock censorship hearing featuring former female wrestler Candice Michelle, who has a “wardrobe malfunction”. Fox chose to pull the second airing of the ad, planned during the 2-minute warning, and instead aired a trailer for the Simpsons Movie. Go Daddy was refunded the money for the pulled ad slot.

Another popular ad featured NFL players who were not in that year’s Super Bowl game. The players were at a beach resort and featured a despondent Ben Roethlisberger. Hall of Famer Joe Montana appears to comfort him, and the players sing a rendition of “Tomorrow” from Annie.

Going into the game New England was the odds on favorite (7). The over/under was 47, with the Eagles covering the spread, losing by just 3 points.

The New England players each received $68,000 for winning the game. The Philadelphia team each went home with $36,500. 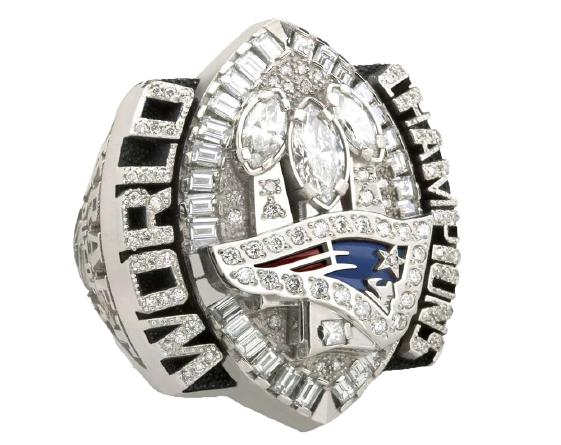 Super Bowl XXXIX was an exciting game from start to finish. The teams kept it close, ending each of the first three quarters tied. New England would be the last team as of 2020 to win back-to-back Super Bowls. This would also solidify the Patriots as a dynasty franchise for years to come.