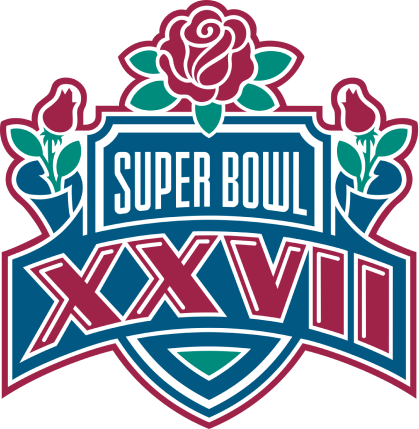 The Buffalo Bills solidified their spot in Super Bowl XXVII with two goals in mind: Win their first title, and avoid becoming the first team in history to lose three straight Super Bowls. Meanwhile, the Dallas Cowboys were resurrecting the dynasty that once qualified for 18 of 20 playoffs between the 60s and 80s. Troy Aikman and the Cowboys lineup had their eyes on the third-ever franchise Super Bowl victory — the last one being 15 years earlier.

January 31, 1993, marked a Super Bowl loaded with controversy years before kickoff, forcing a venue change from Arizona to California after a controversial struck-down law in Arizona rejected the celebration of Martin Luther King Jr. Day. By the time you're done reading this article, you'll know which commercial triggered a future blockbuster hit, how the winning team squared away a 35-point margin, and which pop star helmed the heart-thumping halftime show.

The Lead-Up to Super Bowl XXVII

The 1992-93 Buffalo Bills roster boasted 12 Pro Bowl players and the second-best offensive line in the league, capturing 6,114 total yards and 2,436 rushing yards. Quarterback Jim Kelly once again guided the Bills to their third consecutive Super Bowl, claiming 23 touchdowns and 3,457 yards himself throughout the season.

Helping the Bills add points to the scoreboard were standouts like running back Thurman Thomas (1,487 rushing yards) and wide receiver Andre Reed (913 yards over 65 receptions), some of Kelly's favorite on-field targets.

The once-incredible Dallas Cowboys entered the 1992-93 season on an upward trend, rebuilding substantially since their pathetic 3-13 record back in 1988. In the quarterback position, leading the Cowboys was the recently-drafted Troy Aikman — a former UCLA standout — who secured one of the best passer ratings in the league (89.6) and connected on nearly 64% of thrown passes.

The always-dependable running back Emmitt Smith (1,713 rushing yards and 18 touchdowns) and wide receiver Michael Irvin (1,396 yards) helped the Cowboys to one of their best records in years (13-3) and a second-best 409 points.

And although no Dallas defensive players were contenders for the Pro Bowl, the Cowboys managed to build the best defense in the league (243 points allowed and permitting just 4,278 yards all season). Holding down the fort on Dallas's D-line were players eerily similar to those of the classic Doomsday Defense, including Jim Jeffcoat, who snagged 10.5 sacks.

On January 31, 1993, about 98,374 loyal NFL fans crowded into the Rose Bowl in beautiful Pasadena, California to experience Super Bowl XXVII in-person — the fifth time this particular stadium hosted the event since 1977. The NFL again bumped up Super Bowl ticket prices by an additional $25, costing about $175 for a seat at the big game (worth around $315.35 today).

Being that Pasadena is in California, the Rockettes kicked off the pre-game festivities with a tribute to the Hollywood stars, featuring music from the Eagles — the band — and Fleetwood Mac. After a brief dispute that almost had Jon Bon Jovi singing the National Anthem instead of country star Garth Brooks, a coin toss ceremony led by O.J. Simpson (which landed on heads) triggered the start of Super Bowl XXVII.

The Buffalo Bills began Super Bowl XXVII with an unexpected lead over the Dallas Cowboys. Buffalo forced the Cowboys to punt on their opening drive before Thurman Thomas nabbed a 2-yard touchdown run to put Buffalo on the board. The two teams then swapped a stream of turnovers before the Cowboys tied up the scoreboard — safety James Washington snatched an interception, leading to a series of plays ending on Jay Novacek's 23-yard catch in the end zone.

Now tied 7-7, the Bills sacrificed another scoring opportunity after quarterback Jim Kelly fumbled the ball on a sack. Defensive tackle Jimmie Jones recovered the ball and darted into the end zone, earning the Cowboys 14 points in a matter of 15 seconds.

Early in the second quarter, a rough tackle forced Kelly to leave the game on a knee injury, a move that put back-up quarterback Frank Reich in his place. However, after advancing to the 21-yard line, Buffalo opted against a risky fourth-down play and settled for a field goal by kicker Steve Christie.

The Cowboys widened their 14-10 lead during their next possession. Dallas — just like the first quarter — clinched two back-to-back touchdowns in a matter of seconds. First came a 19-yard pass to wide receiver Michael Irvin, followed by a fumble recovery leading to another Irvin touchdown pass (18 yards) — a Super Bowl record for two touchdowns in 18 seconds. At the half, Dallas led 28-10.

The wildly exciting atmosphere in the Rose Bowl became even more apparent during halftime when pop sensation Michael Jackson headed down to the field. The halftime show started dramatically, as expected — Jackson stood silently for nearly two minutes before beginning with his hit 1991 ballad "Jam."

Jackson then wowed the crowd with heart-thumping renditions of "Billie Jean" (the #2 song from 1983) and "Black or White," which has since gone double Platinum. And as a local children's choir of over 3,000 sang "We Are the World," a video reel on the jumbotron showed clips of Jackson engaging in humanitarian relief efforts. The record-breaking halftime show ended with a performance of "Heal the World" before Jackson left the stadium.

Michael Jackson's Super Bowl XXVII halftime performance didn't only do wonders for his blossoming career, catapulting his most recent album Dangerous 90 places on the charts. It also gave the NFL the incentive to continue booking sensational performers for the halftime slot — more people tuned in for halftime and the second half than the first.

Interestingly, this halftime show almost didn't happen, as Jackson's management team requested a $1 million payout but instead accepted a $100,000 donation to Jackson's Heal the World Foundation. Super Bowl XXVII was the first to offer any monetary incentive for a performer to take the stage.

Dallas began the second half with the same momentum from the first half, sprinting 77 yards down the field before kicker Lin Elliott aced a 20-yard field goal. Not long after, the Bills added points to the board for the last time of the game: A 40-yard pass from Reich to Beebe leading to the end zone.

The fourth quarter brought three additional touchdowns for the Cowboys. First was a 45-yard pass to Alvin Harper. An interception returned possession to the Cowboys, triggering a 10-yard touchdown run by Emmitt Smith. And a fumble recovery guided Ken Norton straight into the end zone. By the time the referees blew the final whistle, the Cowboys had secured a 52-17 lead and a record 21 points in the fourth quarter.

Dallas Cowboys quarterback Troy Aikman was still creating a name for himself in the NFL when he led the Cowboys to their first Super Bowl title since 1978. 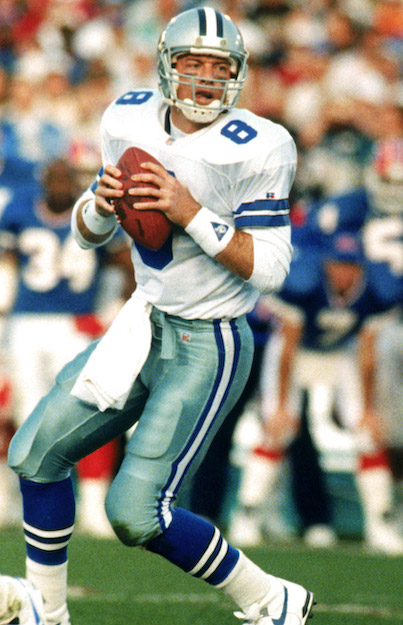 Super Bowl XXVII was just the beginning for Aikman, who didn't show signs of slowing down any time soon. Aikman held this momentum into the next season with yet another appearance.

The much-anticipated broadcast of Super Bowl XXVII brought a surplus of at-home viewers, up by 13.72 million from the previous Super Bowl match-up. Over 133.4 million Americans tuned in to NBC to see if the Bills would fall for a third consecutive Super Bowl — NBC aired the game after trading slots with the Winter Olympics hosts (CBS) the previous season.

Taking part in the coverage — which earned a 45.1 Nielsen rating — were stars like Cris Collinsworth (Bengals), Mike Ditka (former Bears coach), Magic Johnson (Los Angeles Lakers), and Jay Leno (star of The Tonight Show). Super Bowl XXVII was also somewhat of a global affair, reaching television sets in about 125 countries, including in the Philippines, Germany, Canada, and the United Kingdom.

Despite returning for their third consecutive Super Bowl slot, the Buffalo Bills still weren't a championship-caliber team. The supreme no-huddle offense was the second-best in the NFL with 6,114 yards, but the Bills' mediocre 11-5 record barely clinched the #4 seed in their conference. Meanwhile, the star-studded Dallas Cowboys boasted a top-notch rookie quarterback in Troy Aikman and an impressive 409 points on the season.

With that, the resurrected Cowboys went into Super Bowl XXVII favored to win — shielded by a comfortable 6.5-point spread. The Cowboys' near-blowout of the Bills (52-17) allowed Dallas to cover the spread handily by the end of the first half, increasing the cover to 28.5 points by the final whistle. In keeping with the theme, the 44.5 over/under bet was wildly inaccurate. With the Cowboys winning 52-17, an "over" bet yielded a payout by a comfortable 24.5-point margin. 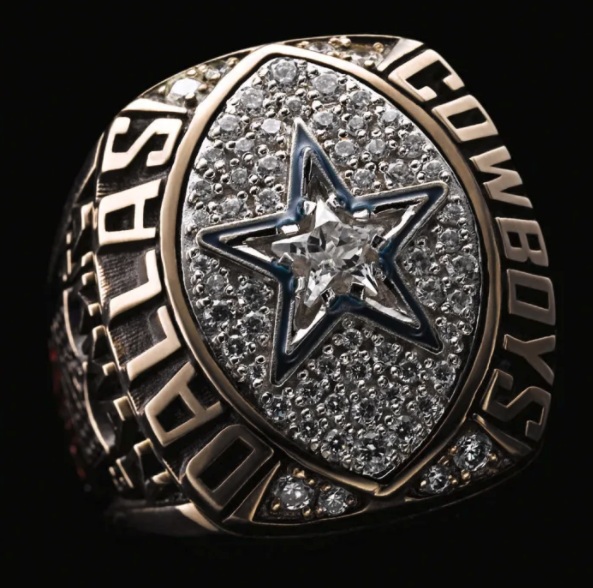 Super Bowl XXVII earned each team a milestone: The Cowboys captured their third-ever Super Bowl title, and the Bills became the first-ever team to lose three straight Super Bowl games. The following Super Bowl would bring both teams back to the gridiron to face off for the Vince Lombardi Trophy once more.