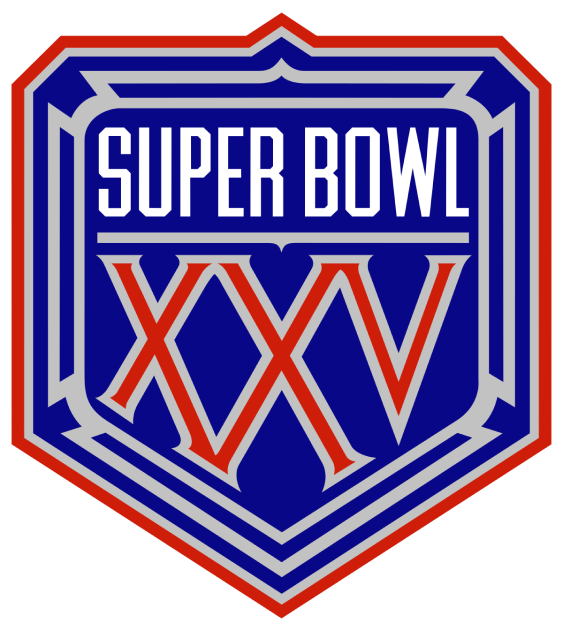 In 1991, the New York Giants and Buffalo Bills convened in sunny Tampa, Florida for a first-of-its-kind match-up: The first time in NFL history that both teams playing in the Super Bowl represented the same home state. The Giants returned from a three-year drought to fight for their second Super Bowl title — with 1985 marking their first. Meanwhile, the Buffalo Bills finally turned their back-to-back division championships into the franchise's first shot at a Super Bowl.

January 27, 1991, marked a Super Bowl pitting the best offensive team (Buffalo Bills) and one of the league's best defenses (New York Giants) against one another. By the time you're done reading this article, you'll know why the viewers at home never caught a glimpse of the Super Bowl XXV halftime show, which turnover record both teams annihilated, and what made this game among the greatest of all NFL games in history.

The Lead-Up to Super Bowl XXV

The Buffalo Bills brought the heat to clinch a 13-3 regular-season record while holding the lead for the most points scored all season with 428. Quarterback Jim Kelly had a unique method for running his offensive line: Skipping the huddle altogether and deciding on a play after seeing how their opponents' defense set-up. Jim Kelly's no-huddle offense enabled him to end the season as the league's top-rated quarterback (101.2) with 24 touchdowns and 2,829 yards.

Snagging Kelly's passes and handoffs were future stars like wide receiver Andrew Reed (945 yards) and running back Thurman Thomas (1,297 rushing yards and 13 touchdowns). And while Buffalo's offense was powerful, their defense was perhaps even stronger. For example, defensive end Bruce Smith nabbed 19 sacks on the season, and the rest of the defensive crew forced fumbles, interceptions, and sacks quite handily.

The 1990-91 Giants season brought a push by head coach Bill Parcells for "power football," long drives, and a sturdy defense — the latter allowing a low of 4,392 yards and 211 points. Veteran quarterback and Super Bowl XXI MVP Phil Simms led the squad to an early ten-game win streak while amassing 15 touchdowns and 2,284 yards before suffering a season-ending foot injury.

Jeff Hostetler took Simms's place after spending seven seasons as a replacement, helping the Giants close out the season with a 13-3 record, NFC East title, and NFC playoff contention. And while the O-line in New York was mediocre at best (#17 out of 28), standouts like running back Ottis Anderson (11 touchdowns and 784 rushing yards) and kick returner Dave Meggett (league leader for punt return yards with 467) kept the team on the board throughout the season.

Despite New York's knack for holding possession and exhausting their opponents' defensive lines, nobody anticipated a Giants victory.

This Giants-Bills match-up was as dead-even as it could get, with one team prioritizing its defensive strategies while the other capitalized on far more offensive opportunities. However, many believed the Bills and their no-huddle offense would overcome the Giants brute-force defense, just as they did during their 17–13 regular-season win over New York.

On January 27, 1991, nearly 73,813 people took their seats in Tampa Stadium down in sunny Florida — marking the first return to the city since Super Bowl XVIII in 1984. The $125 average ticket cost for the previous Super Bowl lasted a single season, with fans spending an additional $25 ($150 total) for a ticket to Super Bowl XXV (valued at $286.65 today).

Now about five months into the Gulf War, American football fans across the country were more spirited than ever, a fact only highlighted by Whitney Houston's riveting National Anthem performance. Unlike the nearly two dozen renditions before hers, Houston's performance would go on to claim the #20 slot on the Billboard Hot 100. After a coin toss helmed by former league commissioner Pete Rozelle that landed on heads, a Giants kickoff started the game clock.

The Giants got off to a strong start early into the first quarter, chopping more than six minutes off the clock with a 10-play drive ending on a 28-yard field goal by Matt Bahr. Not two minutes later, the Bills answered with a field goal of their own, this time a 23-yard clear shot by kicker Scott Norwood.

Now tied 3-3, the Bills cranked up the intensity and put their no-huddle offense to the test. Buffalo marched 80 yards down the field — conversion after conversion — with four successful passes to Andre Reed. Kelly handed the ball off to running back Don Smith, who ran one yard into the end zone for a 10-3 Bills lead. Shortly after, Bruce Smith of the Buffalo Bills triggered a safety (and an extra two points for Buffalo) after annihilating Hostetler in the Giants' endzone.

But the Giants wouldn't end the first half without getting on the board one last time. Hostetler and New York played it fast and light on an 87-yard march into touchdown territory, allowing wide receiver Stephen Baker to dash 14 yards into the endzone to narrow the Bills' lead. The scoreboard for Super Bowl XXV was tight by halftime, with the Bills leading narrowly just 12-10.

Like a few other halftime shows before it, Super Bowl XXV had a high-profile main act: The New Kids on the Block. However, this was the first time in Super Bowl history that the NFL booked a contemporary act that'd pique the interest of younger audiences and non-football fans — a category of viewers the NFL desperately needed to expand.

Yet, it was difficult for the NKOTB to compete with Whitney Houston's chart-topping performance of the Star-Spangled Banner earlier in the night. And this "A Small World Salute to 25 Years of the Super Bowl" didn't even air live on the ABC broadcast, as the network briefly handed the coverage to reported Peter Jennings to give an update on the Gulf War instead.

Keeping with the Disney theme, the teen heartthrobs performed tunes like "This One's for the Children" and "Step by Step" with lovable Disney characters like Minnie Mouse and Roger Rabbit beside them. Given the odd combination of an A-list pop group, Disney characters, and young children dancing, the NKOTB didn't get the opportunity to belt their hit songs like "Cover Girl" and Call It What You Want."

The Giants returned to the field with the wind at their backs, marching 75 yards over nearly ten minutes before Ottis Anderson clinched his only touchdown of the game — a brief 1-yard run. This touchdown gave the Giants their first lead of the game since the first quarter and returned possession to the Bills for the first time in two hours.

The Bills finally returned to the scoreboard early in the fourth quarter on Thomas's 31-yard trek into touchdown territory — also clinching the 1,000th point ever scored in the Super Bowl. However, the Giants refused to let the game clock run out while trailing 19-17. New York crushed through 14 plays, chopped more than seven minutes off the clock, and secured a one-point lead on a 21-yard field goal by kicker Bahr.

Giants running back Ottis Anderson went into Super Bowl XXV as the top rusher on the team, amassing 11 touchdowns and 784 rushing yards. As such, Anderson's performance during Super Bowl XXV didn't go unnoticed, earning him the MVP title. 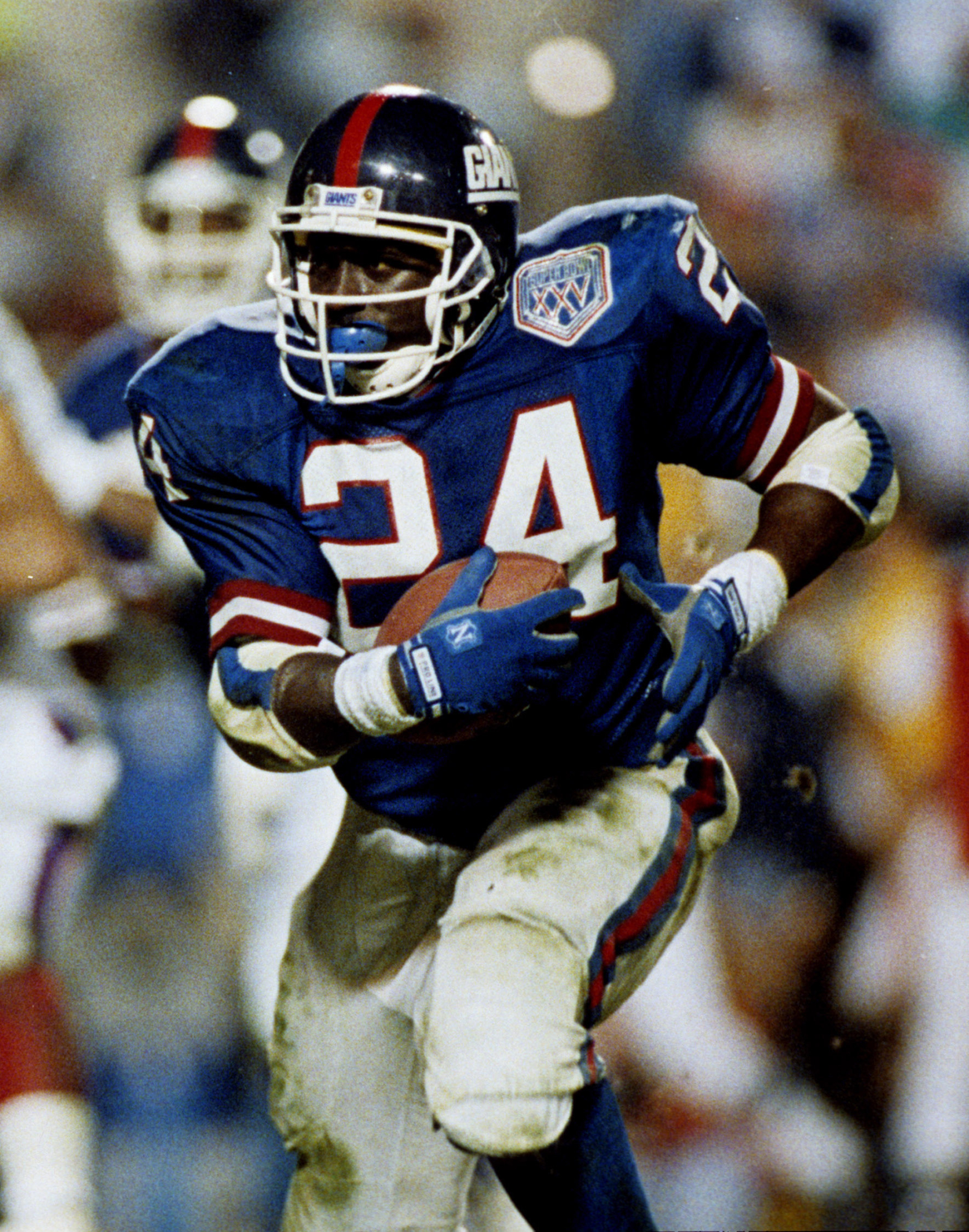 Anderson's 1-yard touchdown run late in the third quarter allowed the Giants to regain their lead and transform it into their second Super Bowl victory.

Above, you can find a photo of Super Bowl XXV MVP Ottis Anderson rushing with the ball.

Super Bowl XXV was a rebound of sorts on the viewership front, snagging a slightly-increased 112.1 million viewers and a more impressive 41.9 Nielsen rating.

However, Americans weren't the only ones paying attention to the big game on ABC, and the Gulf War only increased global interest in the NFL and the Super Bowl — the game also aired worldwide in countries like Australia, Russia, Canada, Mexico, and Venezuela.

The Bills and Giants entered Super Bowl XXV with an identical record (13-3), but their on-field performances couldn't have been more different. The 1990-91 Bills roster boasted nine Pro Bowl players and a top-rated quarterback while concluding the season with a league-high 428 points. Meanwhile, the Giants had a top-notch defense — limiting opponents to 4,392 yards and a league-low on points allowed — while also scoring a dismal 211 points all season.

Everybody expected the Bills to win by a margin of 6.5 points. However, the narrow 20-19 Giants upset victory kept the Bills from covering the 6.5-point spread, instead of allowing the Giants to cover by 7.5 points. On another betting front, the 39 total points scored in Super Bowl XXV and a 40.5-point over/under allowed an "under" bet to secure a narrow payout. 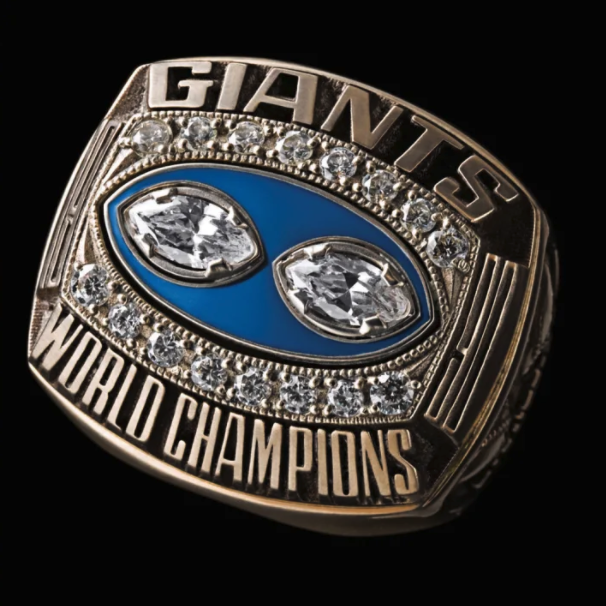 Super Bowl XXV was a wildly exciting game given the back-and-forth style of play and a close margin of victory. Neither the Giants nor the Bills committed a turnover during the game — a first-of-its-kind accolade on the Super Bowl stage. And the Bills didn't let their narrow loss to the Giants keep them from seeking vengeance the following season, though their new opponents were undoubtedly far tougher than New York.