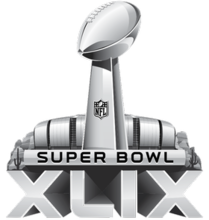 It was smooth-sailing in Super Bowl XLVIII for the Seahawks, who handily obliterated the Denver Broncos in a dramatic 43-8 upset. The Seattle Seahawks returned again for Super Bowl XLIX, breaking the NFL's 11-year drought in consecutive Super Bowl appearances by a single team.

The 49th Super Bowl was perhaps one of the most dead-even matchups on the big stage in a battle of two 12-4 teams with the No. 1 seeds in their conferences: The Seahawks and Patriots.

February 1, 2015, delivered a heart-pounding Super Bowl that would become one of the most-watched in NFL history and one that remained up in the air until the final play of the game.

By the time you're done reading this article, you'll know what caused outrage toward New England in the weeks leading up to the game, how many thousands of dollars fans spent on a ticket, and why viewers left the game talking about sharks rather than football.

The Lead-Up to Super Bowl XLIX

The 2014-15 New England Patriots were unlike any other Patriots squad in recent history, but not for a good reason. Veteran quarterback Tom Brady failed to take control early in the season, and the Patriots dropped to a concerning .500 record within the first four games. However, in true Brady fashion, the team did an about-face to capture a modest 12-4 record, the No. 1 seed in the conference, 468 total points, and a knack for winning by 9.7 points or more.

The 14-year veteran ended the season with one of his best yet (despite his team's dismal performance), clinching 33 touchdowns and 4,109 yards while only tossing eight interceptions. Giving the Patriots a season-long fighting chance at another Super Bowl were stars like tight end Rob Gronkowski (1,124 yards), wide receiver Julian Edelman (974 yards), and kicker Stephen Gostkowski (156 points and 94.6% on field goals).

Like their Super Bowl XLIX opponents, the Seattle Seahawks didn't have an excellent start to the 2014-15 season. The reigning Super Bowl champions fell into an unexpected .500 record just six games in, only securing a 12-4 final tally after winning nine of the last ten regular-season games.

However, the Seahawks had no trouble holding onto their title of No. 1 defense in the NFL, only allowing 254 points and 2,762 rushing yards all season. And still leading the squad in Washington was quarterback Russell Wilson, who led both an impressive throwing (20 touchdowns and 3,475 yards) and rushing (six touchdowns and 849 yards) game.

But Wilson didn't land his team in the Super Bowl without a little help from his starting line-up. Running back Marshawn Lynch (1,306 rushing yards and 13 touchdowns) and receiver Doug Baldwin (825 points) helped guide the Seahawks to their 394 total points — a steep fall from the previous season.

Super Bowl XLIX didn't come without a little negative publicity for Tom Brady, Bill Belichick, and the New England Patriots. Brady and Belichick found themselves engulfed in controversy when they were accused of intentionally deflating the footballs for the AFC Championship game against the Colts. Many loyal NFL fans perceived the Patriots as "cheaters" from there on out, though the dispute went unsettled for nearly two years.

On February 1, 2015, 70,288 proud football fans piled into the University of Phoenix Stadium in Glendale, Arizona — the home stadium of the NFL's Arizona Cardinals. Fans reportedly spent over $1,750 (valued at $1,922.56 today) for the average ticket, though most fans paid over $8,000 after ticket resales ran rampant in the weeks leading up to the game.

The pre-game festivities for Super Bowl XLIX brought stars to appeal to a broader base. Idina Menzel — the voice of "Elza" in the children's movie, Frozen — performed a moving rendition of the National Anthem. And shortly after, "All of Me" crooner John Legend took to the turf to perform a soulful "America the Beautiful."

Super Bowl XLIX got off to a rocky start, which wasn't surprising given that the teams were equally matched in more ways than one. Within the first quarter, each team punted the ball, Tom Brady threw a rare interception, and Seattle's Jeremy Lane left the game with an ACL tear and broken wrist.

Neither team got on the scoreboard until Tom Brady threw a direct 23-yard shot to Edelman to secure a first down and end the drive on an 11-yard touchdown by Brandon LaFell. The Seahawks responded in a drive that would include Russell Wilson's first completion of the night. The ensuing drive included short plays by Kearse and Lynch before a 44-yarder to Chris Matthews put Seattle in the red zone.

The Seahawks tied the game at 7-7 after Lynch's eventual 3-yard touchdown run. However, the intensity ramped up despite having only 2:16 remaining on the clock. Brady led New England on a rapid-fire march down the field until Rob Gronkowski clinched an unexpected 22-yard touchdown pass to return the Patriots' lead.

The Seahawks answered, trekking 80 yards down the field in a series of quick-burst plays of their own with just 29 seconds left in the half. Wilson then attempted a risky touchdown pass in the remaining two seconds, proving successful on an 11-yard bullet to Matthews in the end zone.

The game remained tied 14-14 by halftime.

The halftime show at Super Bowl XLIX brought a high-octane Katy Perry performance that fans still talk about today — though likely not for the reasons Perry imagined. The show began mysteriously, with over 600 on-field performers holding lit globes in the shape of the Pepsi logo (the show's sponsor). Perry's entrance onto the field in Arizona was unforgettable, entering on a mechanical lion as she opened the show with her hit song, "Roar."

Against the backdrop of an on-field chessboard featuring acrobatic dancers, Perry performed her chart-topping "Dark Horse" before Lenny Kravitz joined Perry on stage. The unusual duo took on a performance of "I Kissed a Girl" with explosions behind them and Perry herself sporting a flame-themed dress.

The vibe on stage then took a sudden beachy feel, complete with beach balls, palm trees, and a pair of sharks behind Perry. The pop sensation then pressed through an impressive mash-up of her tunes like "California Gurls" and "Teenage Dream" while one of the sharks — affectionately called "Left Shark" — danced awkwardly and out of sync with the rest of the choreography.

Then, Perry welcomed the long-forgotten Missy Elliot on stage, fangirling alongside the rapper as she performed her songs "Lose Control," "Get Ur Freak On," and "Work It." Katy Perry ended her captivating halftime performance sporting a luxurious gown, belting "Firework" as she left the stage on a shooting star and floated around the arena. While Perry's performance was the top-rated in NFL history, many fans insist that Left Shark and Missy Elliot stole the show.

Four minutes into the second half, the Seattle Seahawks stole the lead for the first time. Hauschka delivered a successful 27-yard field goal to put the Seahawks ahead 17-14. Seattle kept the momentum alive and forced a second Brady interception in a play that ended with Avril leaving the game with a presumed concussion, putting the strength of the entire Seahawks' defensive line at risk.

Wilson capitalized on the interception despite Avril's injury, leading his squad on a 50-yard march down-field. Then, Seattle scored a wildly exciting 3-yard touchdown to give the Seahawks a comfortable 24-14 lead. But Tom Brady kicked it into full gear, refusing to fall in yet another Super Bowl appearance.

Brady connected on a 4-yard pass to Amendola to narrow Seattle's lead to just 24-21. During that same scoring drive, Julian Edelman received a noticeable concussion after a hard hit but was never removed from the game for medical treatment. Shortly after, Edelman caught the touchdown pass that put the Patriots ahead 28-24.

With barely a minute left in the game, New England was desperate to hold onto their lead. The Seahawks lost the ball after Butler intercepted Wilson's pass to return possession to the Patriots with only seconds left. The Patriots delayed the snap, used their final timeout, and took a knee to wind down the clock and win the game — though, the strategy led to a brawl that led to a Seattle player being ejected.

New England players netted a $97,000 bonus for winning while their opponents walked away with a comfortable $49,000 check per player.

Patriots quarterback Tom Brady was in his 14th season with the team and was a player known for breaking record after record. 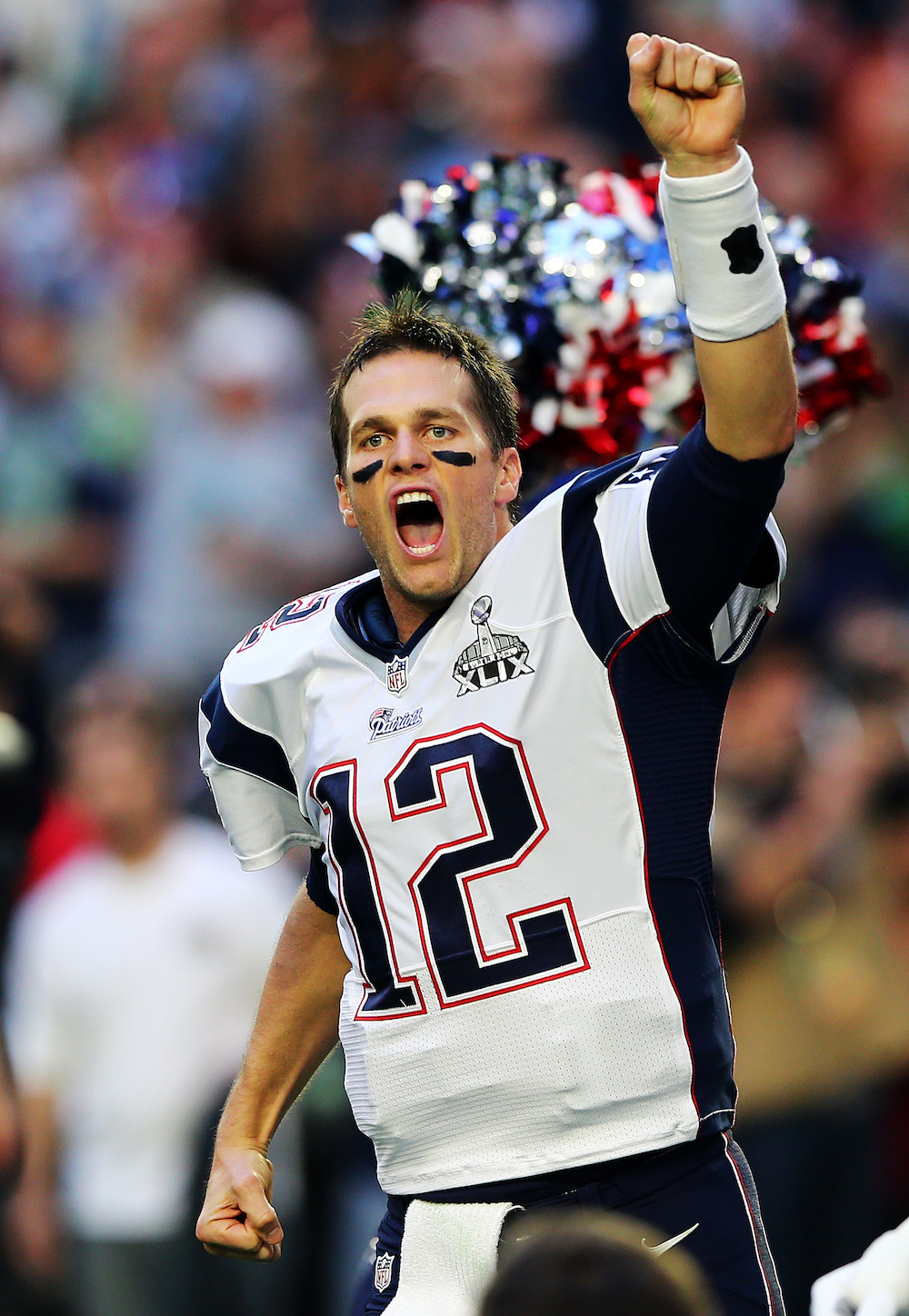 With his unforgettable performance on the big stage, Brady became one of the winningest quarterbacks in history and tied the legendary Joe Montana for most Super Bowl MVP titles in a career.

As was the case in Super Bowl XLVIII, more viewers tuned in during Super Bowl XLIX's halftime show than at any point during the first half. Approximately 161.3 million people in total watched NBC's festivities from home, and viewership skyrocketed even further as Tom Brady guided his team to an unexpected fourth-quarter comeback.

This wildly exciting game delivered a 47.5 Nielsen rating and an unforgettable collection of ads. Now valued at $4 million per 30-second commercial slot, fans at home chuckled at ads like the Snickers commercial featuring Danny Trejo playing Marcia Brady from the Brady Bunch. And the night adopted a far darker tone after airing a domestic abuse awareness commercial where a woman pretended to order a pizza over the phone while dialing 9-1-1 to signal for help.

Super Bowl XLIX was exciting on TV but one of the least exciting at the betting table. The teams were so evenly matched, and, with no clear favorite in sight, the game fell into a "pick 'em" bet.

Given the lack of a predicted winner, there was also no spread for either team to cover. However, fans did place bets in the 47.5-point over/under. The tight game narrowly crossed into "over" territory with 52 total points scored in Super Bowl XLIX. 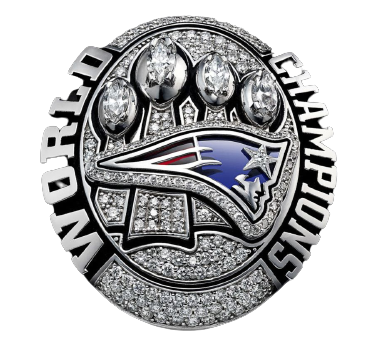 Super Bowl XLIX delivered a Super Bowl exactly as expected, though the game's final moments surprised most. Many were displeased that Edelman, who clearly suffered a concussion mid-game, was never removed for evaluation and went on to score the game-winning touchdown with two minutes remaining. But while the Patriots proved victorious, they'd have to wait a few years to return to the big stage.