The lead-up to Super Bowl VIII was unprecedented. The Miami Dolphins became the first team to qualify for three consecutive championships, a brand new city volunteered to host the big game (Houston, Texas), and both teams went into Super Bowl VIII with the same regular-season record (12-2).

January 13, 1974, brought together reigning Super Bowl champions — the Miami Dolphins (AFC) — and the Minnesota Vikings, who last made a championship appearance in Super Bowl IV in 1970. By the time you're done reading this article, you'll know whether Miami became the second team to win back-to-back Super Bowls, what former MVP and Jets quarterback Joe Namath predicted would happen, and which running back secured the MVP title.

The Lead-Up to Super Bowl VIII

The Miami Dolphins were entering the 1973-74 NFL season as Super Bowl Champions and as a team with a first-of-its-kind 17-0 record. While Miami approached Super Bowl VIII with a 12-2 regular-season, fans and commentators argued that the Dolphins' faced far tougher opponents in 1973 (including the Dallas Cowboys and Buffalo Bills), making the latest team even more likely to win the title.

On their relatively young roster, the Dolphins had quarterback Bob Griese (threw for 17 touchdowns), fullback Larry Csonka (1,003 yards), and safety Jake Scott (Super Bowl VII MVP with two interceptions). The combination of the star power, a previous undefeated record, and a Super Bowl title to their name made the Dolphins the favorites to win.

The Minnesota Vikings began their 12-2 season with an impressive nine-game win streak that put the franchise on the map for the 1973-74 season. With veteran quarterback Fran Tarkenton (2,113 yards and 61.7% pass completion) at the helm and a star-studded roster including wide receiver John Gilliam (907 yards on 42 passes) and a defensive line holding onto its "Purple People Eater" moniker, the Vikings still had a reasonable shot at winning Super Bowl VIII.

In the lead-up to Super Bowl VIII, both teams took to local practice fields to get ready for the first Super Bowl played on AstroTurf. The Minnesota team was rightfully upset that their training facility lacked blocking sleds and a well-furnished locker room.

Meanwhile, the AFC's Dolphins enjoyed the luxurious facility of the former Houston Oilers, potentially explaining each team's performance on game day. With first-hand experience of watching each team on the gridiron, Jets quarterback Joe Namath predicted a Dolphins victory if they could clinch a touchdown on the opening drive.

On January 13, 1974, 71,882 football fans found their seats in Rice Stadium in Houston, Texas — never before had a Super Bowl taken place in a non-NFL arena. Those in attendance for Super Bowl VIII shelled out around $15 for a ticket (about $79.19 today).

After a performance of the National Anthem and America the Beautiful by country musician Charley Pride followed by Miami's third consecutive Super Bowl coin toss win (landing on heads), a Vikings kickoff started the game.

Upon catching the initial kick, Miami safety (and reigning Super Bowl MVP) Jake Scott locked down an impressive 31-yard dash that set the stage for the remainder of the first quarter. Plays by Mandich, Csonka (16 yards), Briscoe, and Morris led the Dolphins to their first touchdown of the game: A 5-yard run by Csonka into the end zone.

The "No-Name Defense" of Miami held Minnesota off on their next possession and regained control of the ball after only three plays. In another 10-play drive, plays by Csonka (28 yards, total) and a completed pass by Briscoe — again — brought Miami into the red zone. Jim Kiick managed a 1-yard-dash into touchdown territory, widening Miami's lead to 14-0 by the end of the first quarter.

Both teams failed to score on their first possessions of the second quarter, though Miami's Garo Yepremian (who gained notoriety for his flubbed field goal attempt in Super Bowl VII) sent the ball straight through the uprights. Minnesota responded and attempted to catch up to the Dolphins' 17-0 lead with minutes remaining in the first half.

Vikings quarterback Fran Tarkenton completed passes to wide receiver John Gilliam and tight end Stu Voight, with only one yard standing between Minnesota and a first down. The Vikings, trailing by 17 points, decided against a field goal attempt and instead fumbled the ball on Oscar Reed's running play.

The Dolphins went into the locker room for halftime believing they had Super Bowl VIII in the bag while the Vikings were willing to do anything to cut their losses. Meanwhile, Miss Texas 1973 (Judy Mallett) performed at halftime on her fiddle alongside the University of Texas Longhorn Band.

Minnesota handily bungled its first chance to get on the scoreboard on the first play in the second half. A clipping penalty nullified Gilliam's impressive 65-yard kickoff return, the Dolphins sacked Tarkenton, and the Vikings lost possession as quickly as they received it. Forty-three yards later, the Dolphins secured their third touchdown after another short endzone pursuit by Csonka — Miami took a 24-0 lead with 24 minutes left in the game.

Knowing they had just 15 minutes remaining to make a comeback, the Vikings approached the final quarter of Super Bowl VIII with growing momentum. After a series of ten plays, five of which were successful passes by Tarkenton, the Vikings quarterback carried the ball into the end zone on a 4-yard run (the first time in Super Bowl history that a quarterback scored a rushing touchdown).

The Dolphins regained control of the ball with around six minutes left on the clock and intentionally ran the clock down to secure a 24-7 victory over Minnesota.

Larry Csonka was undeniably the best player on the field in Super Bowl VIII, earning him the title of MVP. 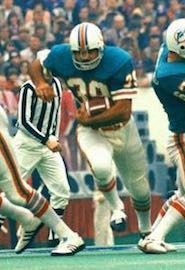 To say that Super Bowl VIII garnered the attention of viewers en masse would be quite the understatement. In addition to the nearly 72,000 fans in attendance down in Houston, over 63.2 million Americans caught a glimpse of the big game, helping CBS to secure a Nielsen rating of 41.6.

As they did in Super Bowl VII, the reigning champions (Miami Dolphins) approached Super Bowl VIII as the favorites to win. Miami mercilessly covered the 6.5-point spread by an earth-shattering 10.5 points by defeating the Vikings 24-7.

The over/under of 33 points and a total score of 31 points left anyone betting "under" winning big in their pools. 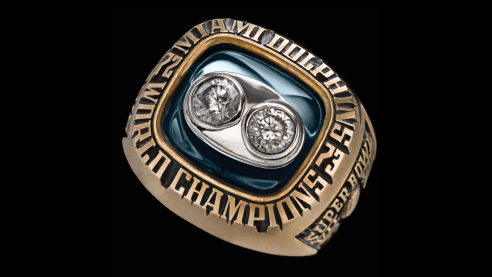 The Miami Dolphins ended the 1973-74 season as back-to-back Super Bowl Champions and the only team in NFL history at the time to qualify for three consecutive championships. Despite their trio of incredible seasons, the Dolphins dynasty would soon crumble.

Miami failed to earn a spot in Super Bowl IX and lost three of its best players (including Csonka) by the 1975 season. On the opposing side, the Vikings would continue a common Super Bowl trend: The losing team returning in the following Super Bowl to get revenge.