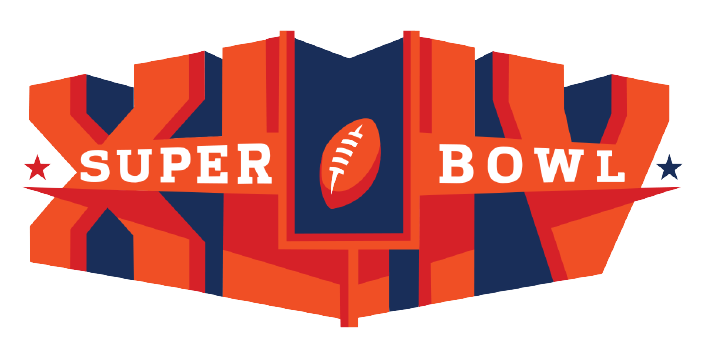 Super Bowl XLIV was played on February 7, 2010, to determine the champions for the 2009 season. The game was played between the New Orleans Saints and the Indianapolis Colts. The Saints would win the game 31-17, giving them their first Super Bowl victory.

At first, the Saints appeared to be losing the game, but after an explosive second half went on to victory.

The Lead-Up to Super Bowl XLIV

The Indianapolis Colts finished with a 14-2 season. This earned them their second trip to the Super Bowl in four years. The Colts were looking to repeat their success from Super Bowl XLI.

The Colts were once again led by quarterback Payton Manning. He passed for 4,500 yards for 32 touchdowns and 16 interceptions. The offensive line led by Jeff Saturday had only allowed Manning to get sacked 13 times, the lowest in the league that year. This allowed Manning to reach favorite targets in receiver Reggie Wayne and tight end Dallas Clark who each recorded 100 receptions and 10 touchdowns. Other reliable targets were receivers Pierre Garcon (47 receptions and 6 touchdowns) and Austin Collie (60 receptions and 7 touchdowns). Running back Joseph Addai led the running game with 821 rushing yards and 10 touchdowns.

Defensive ends Robert Mathis (9 sacks and 5 forced fumbles) and Dwight Freeney (13 sacks) led the defense. Behind them was a strong defensive line with Clint Session and Gary Brackett.  The secondary was led by safety Antoine Bethea with 70 tackles and 4 interceptions.

The Saints offense led the NFL in scoring in the 2009 season. Drew Brees led the team with 4,338 passing yards for 34 touchdowns and 11 interceptions. He had plenty of targets to choose from including receivers Marques Colston (70 catches with 9 touchdowns), Devery Henderson (51 receptions), Robert Meachem (45 receptions), and tight ends Jeremy Shockey (48 catches) and David Thomas (35 interceptions).  Reggie Bush was a major contributor to the running game with 390 rushing yards.

Pass rusher Will Smith led the team with 13 sacks. Linebacker Johnathan Vilma also had 87 tackles and 3 interceptions. Darren Sharper led the secondary with 9 interceptions and 3 touchdowns.

This was the first Super Bowl since XXVIII where both No. 1 seeds faced each other in the Super Bowl. The game would also set another Super Bowl viewing the record as the international audience continued to grow.

Before the coin toss ceremony, Hall of Famer Jerry Rice was presented to the crowd to celebrate the 15th anniversary of the San Francisco 49ers. Fellow 2010 inductee Emmitt Smith conducted the coin toss for the game.

The Saints called heads and won the toss, choosing to receive the ball.

The Saints' first possession ended in a 3-and-out punt. The Colts took the ball at their own 27-yard line. They drove to the end with a 38-yard kick by Matt Stover; at 42 Stover became the oldest player to compete in the Super Bowl. The Saints fired back with a 16-yard pass to Bush. However, they were stopped and were forced to punt. The Colts then completed a 96-yard scoring drive and tieing for the longest drive in Super Bowl history. A 19-yard pass to Pierre Garcon ended the drive and the quarter with the score 10-0.

The Saints opened the quarter with a drive to the Colts' 22-yard line. However, Drew Brees was sacked on the third down, and the Saints had to settle for a field goal to make the score 10-3. A dropped pass by Pierre Garcon forced the Colts to punt and allowed the Saints to drive deep into Colts territory. They were at 1st-and-goal at the 3-yard line but were unable to run the ball into the end zone. The Colts attempted to run down the clock with their running game, but the Saints were able to force them to punt with time still remaining.  With only one time out left, Bush got the Saints into field goal territory, allowing them to end the half 10-6 behind the Colts.

During halftime, British rock band The Who performed a medley of several of their hits.  Songs included “Pinball Wizard”, “Baba O'Riley”, “Who Are You”, “See Me, Feel Me”, and “Won’t Get Fooled Again.”  This was also the first halftime show since Super Bowl XXXIV that no fans were crowded around the stage.

The third quarter began with a surprise onside kick by the Saints. This “Ambush” play changed the momentum of the game for New Orleans. After recovering the ball on the 42-yard line, the offense stormed down the field in a 58-yard drive where they never faced a 3rd down. A pass to Pierre Thomas took the ball in the endzone and New Orleans took the lead 13-10. The Colts answered with their own 76-yard touchdown drive with Addai regaining the lead 17-13. Hartley ended the quarter with a 47-yard field goal to bring the score within one point at 17-16.

Indianapolis opened the final quarter with a drive to the Saints' 33-yard line, setting Stover up for a 51-yard field goal attempt. Stover missed the kick and put the Saints at their own 41. Brees then ran a series of running and passing plays chewing up yardage and the clock. The drive ended with a 2-yard touchdown pass to Schokey. The Saints choose to run a two-point conversion instead of giving the Colts a chance to win with a last-minute touchdown. Lance Morris stretched the ball into the endzone before touching the ground and rolling over his head.

A Manning pass was intercepted by Tracey Porter and was run back for a 74-yard touchdown, increasing the lead 31-17 with 3:12 remaining. The Colts were able to drive to the Saints 3-yard line but were unable to complete a play to score a touchdown. Regaining possession, Brees to a knee with 0:44 remaining in the game, winning the Saints their first Super Bowl.

It was no surprise when Drew Brees was chosen as MVP for Super Bowl XLIV.  His leadership and ability to utilize his offensive team allowed the Saints to turn around what could have been a crushing defeat. 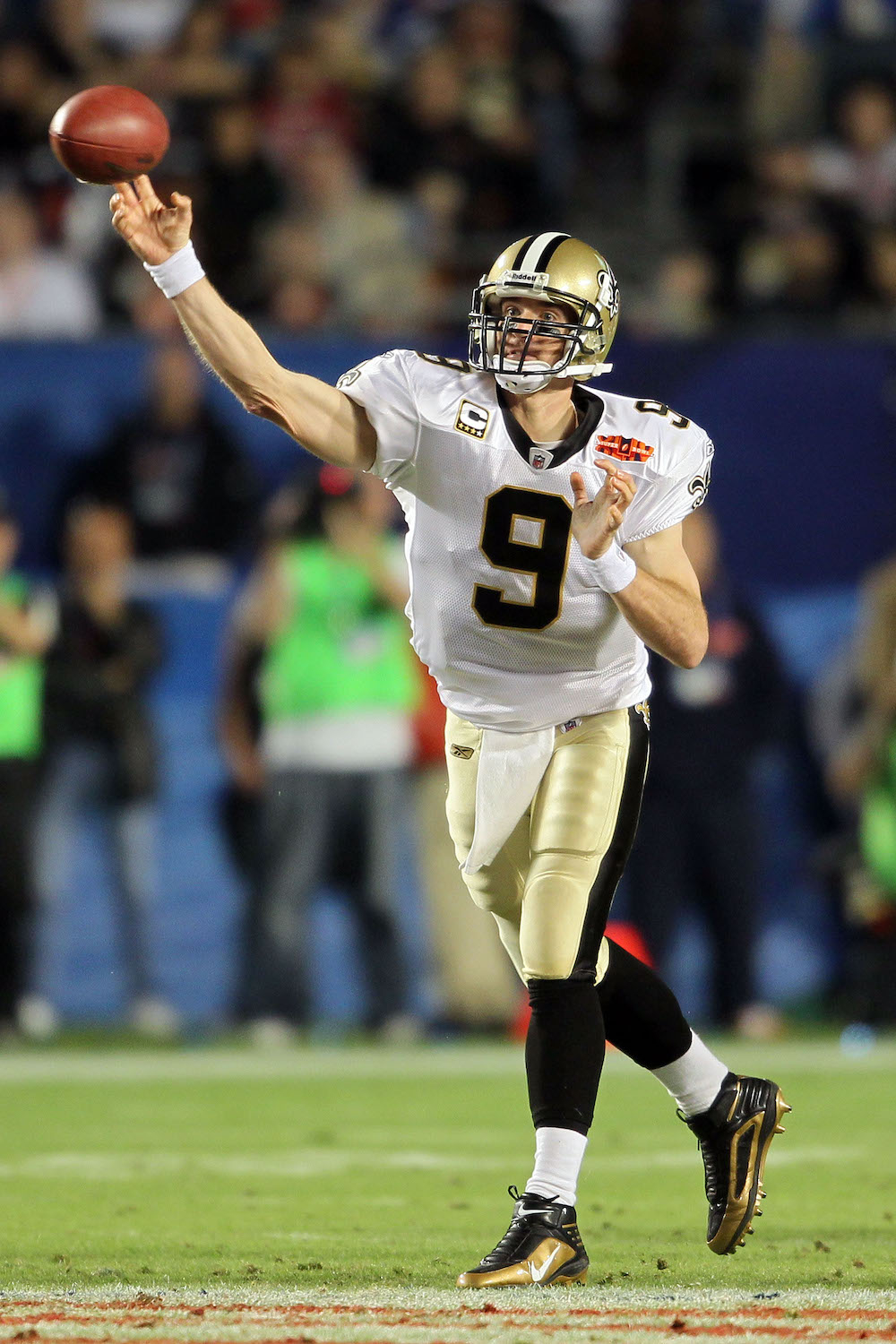 The host for Super Bowl XLIV was CBS. The game was viewed by a record estimated 153.4 million people worldwide. The game received a 45.0 Nielsen rating. The broadcast team for the day was Jim Nantz, Phil Simms, Steve Tasker, and Solomon Wilcots.

Returning commercial partners Anheuser-Bush INBEV and Career Builder had 8 and 2 commercial spots, respectively. Both Pepsi and FedEx chose not to run ads that year (the first Pepsi absence in 23 years of partnering with the NFL). Rival companies Coca-Cola and Dr. Pepper Snapple Group took advantage to run their own ads with their competitors' absence. The Rock Band kiss was featured in one of the Dr. Pepper ads. Dorito’s again ran fan-made ads for the Super Bowl to a positive response. McDonald’s updated a famous 1990s ad (featuring Micheal Jordan and Larry Bird) with LaBron James and Dwight Howard playing a friendly game of H-O-R-S-E.

The Colts were the 5-point favorites going into the game, with the underdog Saints pulling off the upset. The over/under was 57, with the under winning with the final score of 31-17.

Both teams saw an increase in their Super Bowl bonuses. The Saints each received $83,000 while the Colts had a payday of $42,000. 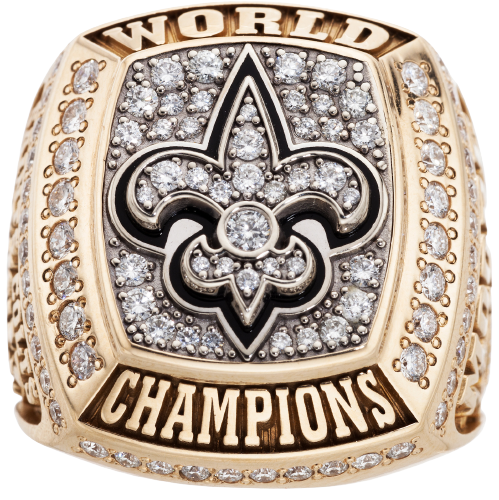 Super Bowl XLIV closed out the first decade of the 21st century with a phenomenal game. A record-setting crowd saw the Saints upset the Indianapolis Colts to win their first Super Bowl title. While the Colts were unsuccessful in their hunt for another Super Bowl win, their quarterback was not finished.

Six years later, Manning would lead another team to a Super Bowl win.