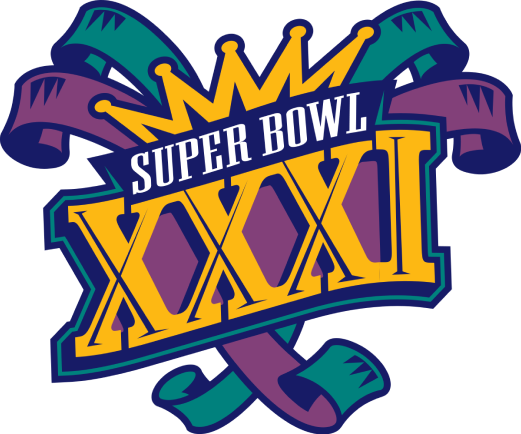 Super Bowl XXXI didn't deliver any high-profile 90s teams like the Cowboys or the 49ers, who had both held de facto monopolies over Super Bowl titles in recent seasons. But the 31st Super Bowl brought together two teams who had successfully rebuilt their franchises after years of ineptitude. This unprecedented match-up featured the New England Patriots and the Green Bay Packers, who hadn't laced up for the league championship since 1967.

January 26, 1997, marked a Super Bowl of unexpected feats: Most total points scored in the first quarter, the first "push," and a special teams player clinching the highly sought after MVP title. By the time you're done reading this article, you'll know which new television network broadcasted the game, how a last-minute accident forced a halftime show overhaul, and how future Hall of Famer Brett Favre solidified his spot in the history books during the match-up.

The Lead-Up to Super Bowl XXXI

The 1996-97 New England Patriots were on an undeniable upward swing, once known for losing streaks, empty stadiums, and a lack of local networks broadcasting their games. Bill Parcells, credited for rehabbing the New York Giants and turning them into Super Bowl contenders in 1987, accepted the head coach position in Boston.

Along with Parcells came the addition of Bill Belichick to the coaching staff in New England, an assistant head coach moonlight as the unofficial mediator between Parcells and the new team owner, Robert Kraft — famous for butting heads with his team's coach. The rebuilt New England Patriots didn't qualify for Super Bowl XXXI solely because of a coaching staff overhaul.

Guiding the Patriots to their 11-5 regular-season record was Drew Bledsoe — New England's No. 1 draft pick in 1993 — who racked up 4,086 yards and touchdowns on the season. Bledsoe's impressive on-field coordination with wide receiver Terry Glenn (1,132 yards over 90 receptions) and running back Curtis Martin (1,152 rushing yards and 14 touchdowns) allowed the Pats to amass the second-most points in the NFL while ranking 7th for most offensive yards.

Meanwhile, Willie McGinest (49 tackles and 9.5 sacks) and Willie Clay (72 tackles) successfully held the team down on defense. But despite repairing a team once seen as a lost cause, the Patriots were expected to lose Super Bowl XXXI by a huge 14-point margin.

A winning record wasn't the norm for the Green Bay Packers, historically known for disappointing seasons after winning the first two Super Bowl titles in NFL history. However, the 1992 season brought change that Packers fans had only dreamed of. The former 49ers offensive coach Mike Holmgren accepted a coaching position, and the Packers gained a skilled player that didn't hesitate to play in such a windy, Wisconsin city — quarterback Brett Favre.

Favre proved to be an asset to the once lacking Packers, earning his second-ever NFL MVP award after capturing 3,899 yards and a conference-best 39 touchdowns. Yet, Green Bay's talents spread far throughout the team's roster, including kick returner Desmond Howard (875 punt return yards), wide receiver Antonio Freeman (nine touchdowns and 933 yards), and running back Edgar Bennett (899 rushing yards, leading the team).

The Packers' defensive lineup wasn't lacking either, boasting players like the "Minister of Defense" Reggie White and defensive back LeRoy Butler, who amassed 6.5 sacks and 65 tackles. And by cruising through the playoffs and landing a spot in Super Bowl XXXI, the Packers ended the 49ers' and Cowboys' reign on NFC championship contention.

While the Patriots were preparing to battle for their first Super Bowl title, coach Bill Parcells' mind was elsewhere. The nonstop back-and-forth between him and the Patriots' team owner led him to consider a job with the New York Jets after Super Bowl XXXI concluded. This Super Bowl match-up also celebrated the life of former NFL commissioner Pete Rozelle, who passed not a month and a half earlier.

On January 26, 1997, 72,301 excited football fans crowded into the Louisiana Superdome (New Orleans) to watch the Patriots fight for their first-ever Super Bowl title — also the site of the Patriots' last Super Bowl bid in 1976. Fans paid an average of $275 to watch the match-up in person (worth about $446.15 in today's money).

In true New Orleans fashion, gameday began by building the excitement in the dome. Los del Río hyped up the crowd with their hit tune, "Macarena," before R&B performer Luther Vandross took center-field for a Star-Spangled Banner performance. A coin toss ceremony featuring former NFL coaches like Hank Stram, Mike Ditka, and Tom Flores — all of whom led their teams to victory in New Orleans — landed on heads before the game clock began ticking away.

The starting moments of Super Bowl XXXI shined the spotlight on Green Bay's growing potential as a team. Receiver Desmond Howard trekked 32 yards up the field before Favre did what he does best: Connected on a 54-yard pass to Andre Rison, giving Green Bay an early 7-0 lead on only the second play of the game.

But the Patriots couldn't overtake Green Bay's defensive line-up, and Bledsoe threw an interception to Doug Evans to return possession to the Packers within a matter of minutes. Levens pressed 18 yards between two plays before kicker Chris Jacke secured a 37-yard field goal. New England ramped up their momentum, beginning on the next drive with a touchdown on their own.

Bledsoe nabbed a 32-yard screen pass and dump-off pass before a pass interference sent the Patriots to the 1-yard-line. The quarterback tossed a lob to Byars, who pranced into the end zone to narrow Green Bay's lead to 10-7. But the Patriots defensive line wasn't ready to return the ball to Green Bay, holding New England to the line of scrimmage for a three-and-out.

The Bledsoe/Martin duo advanced the Patriots nine yards until Terry Glenn secured a 44-yard bullet from Bledsoe. On the following play, Ben Coates caught a 4-yard pass to give the Patriots their first lead of the game (14-10).

That was the last lead the Patriots would hold in Super Bowl XXXI. A minute into the second quarter, Favre threw an 81-yard line drive to Freeman to capture an extra seven points on a one-play drive. Yet, Bledsoe and the Patriots couldn't seem to throw off the Packers defense, who again intercepted a pass and stole a New England scoring opportunity.

After Mike Prior's interception, Favre led the squad on a nine-play march on plays to Freeman and Levens before Favre himself rushed two yards into the end zone. Both teams held strong on defense to end the half 27-14 (Green Bay).

The halftime show for Super Bowl XXXI got off to a rocky start days before ZZ Top, James Brown, and the Blues Brothers took the field for their star-studded performance. A bungee jumping circus performer fell to her death while rehearsing a jump into the Superdome, leading the NFL to scrap that portion of the show come game day.

The Blues Brothers got the crowd in the Superdome on their feet and singing along early in the concert. The soul duo reenacted scenes from their movie (The Blues Brothers) while performing hits like "Everybody Needs Somebody to Love" and a cover of their famous "Soul Man." Then, the halftime show took a sudden directional turn when James Brown — alongside a group of dancers — took the mic to croon his funk song "I Feel Good" (twice).

As Brown left the stage, a pack of motorcycles zoomed onto the field, and rock fans across the nation knew what was on the horizon. ZZ Top recovered the remaining time in the show. After renditions of their songs “Tush” and “Legs,” all three acts joined together on stage for a group performance of "Gimme Some Lovin." Despite having some of the biggest acts of the 80s and 90s perform in one night, many fans questioned the combination and on-stage transitions.

The final two scoring opportunities happened before the third quarter ended. The teams began the second half on a series of traded punts before the Patriots finally capitalized on possession. Martin later darted 18 yards for a touchdown to leave New England trailing just six points. The ensuing kickoff set records of epic proportions: Howard — new to his kick returner position in Wisconsin — clinched a record 99-yard play for another touchdown and a 2-point conversion.

The sack and interception-laden fourth quarter ended with no extra points on the board, allowing the Packers to win their first Super Bowl in 30 years by a score of 35-21 — as expected. This Green Bay victory also yielded a $48,000 payout for the Packers’ roster, while New England players earned a $29,000 bonus.

With that, Desmond Howard quickly solidified his place as a special teams asset for Green Bay.

Over 128.7 million viewers tuned in across the country to watch the Packers take on the Patriots, helping Fox reach a record-high 43.3 Nielsen rating. And with Green Bay ultimately proving victorious, the Packers accomplished a feat that only two other teams had before them: Winning the Super Bowl on three separate broadcasting networks (CBS, NBC, and Fox).

The Fox broadcast of Super Bowl XXXI also delivered memorable commercials that viewers still reference today. Advertisers shelled out $1.2 million for 30-second commercial slots that included a somersaulting grandma (Lays), Darth Vader forcibly crushing a child's Pepsi can with "the force," and a promo for The Lost World: Jurassic Park — the second movie in the series.

The Green Bay Packers' qualifying for Super Bowl XXXI was a feat in and of itself. The team's last Super Bowl appearance was during Super Bowl II (1968) and finally turned around several decades of losing records with the help of two-time NFL MVP Brett Favre and the NFC's best record (13-3). And while the talent-level in New England had gradually grown since 1993 thanks to the hiring of Coach Bill Parcells, the Patriots weren't yet a championship-caliber team.

The Packers went into Super Bowl XXXI as clear favorites to win with a 14-point spread. But for the first time in Super Bowl history, neither team covered the spread — it ended in a "push." In other words, the 35-21 Packers victory matched the 14-point spread perfectly, meaning nobody profited on any score bets. However, the 49-point over/under did earn bettors a payout. With 56 total points scored, "over" proved to be a fantastic financial choice. 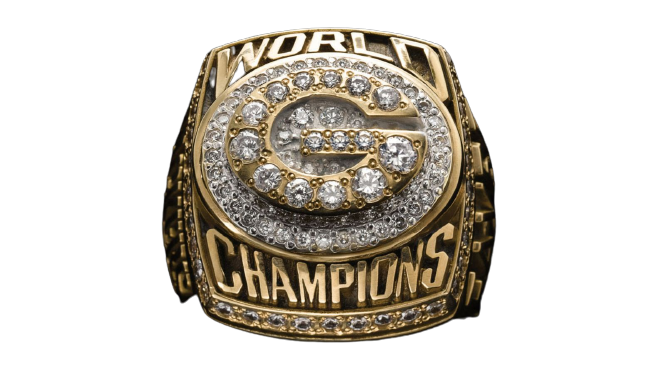 Super Bowl XXXI ended exactly as expected, with the Packers returning the Vince Lombardi Trophy to Wisconsin for the first time in 30 years. But Green Bay refused to let their latest Super Bowl victory be a "one and done" type of deal. The Packers did what they do best — they sought another back-to-back title by qualifying for Super Bowl XXXII.