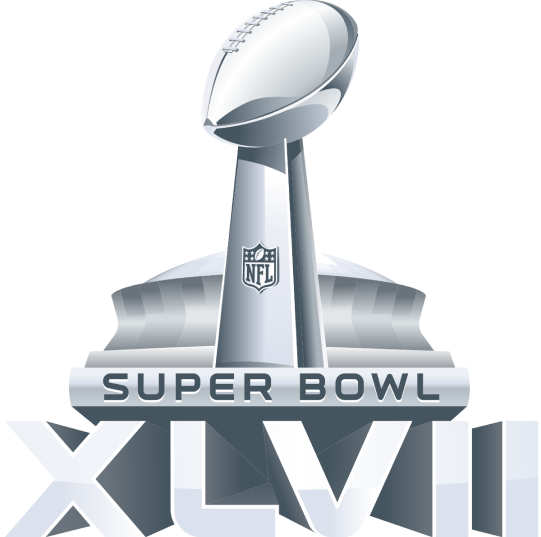 Super Bowl XLVII wasn't special because the Baltimore Ravens and San Francisco 49ers were the greatest teams in the league, nor is it a game remembered for its wildly surprising outcome. The 47th Super Bowl grabbed national attention because both squads' head coaches were brothers — Jim and John Harbaugh — and an unexpected 34-minute power outage delayed the game in the second half.

February 3, 2013, was a historic day in NFL history, as the 49ers were vying to tie the record for the most Super Bowl victories by an NFL franchise (the Steelers held the record with six). By the time you're done reading this article, you'll know which Harbough brother led his team to victory, how much advertisers paid for a 30-second ad slot after the latest price hike, and why 161.4 million viewers were glued to their TVs during the final six minutes.

The Lead-Up to Super Bowl XLVII

The Baltimore Ravens’ 2011-12 season ended with a heartbreaking loss to the New England Patriots in the playoffs. So, the Ravens entered the 2012-13 season looking to make a comeback. Under the leadership of head coach John Harbaugh, Baltimore clinched a 10-6 record and ranked in the middle of the pack for both points allowed (21.6) and points per game (24.9), but managed to outscore the Patriots on their pathway to the Super Bowl.

However, Ravens quarterback Joe Flacco was undoubtedly at the top of his career during the season, capturing 22 touchdowns and 3,817 passing yards on his team’s progression through the playoffs. The always-dependable Anquan Boldin (921 yards) and halfback Ray Rice (1,143 rushing yards and 478 receiving yards) held down the fort on offense to keep the Ravens' chance at a Super Bowl alive — the first in nearly 12 years.

But the talent ran even deeper in Baltimore’s roster. For example, kicker Justin Tucker gave the team an air of confidence by going 42/42 on extra points, and Ray Lewis — now in his 17th season — amassed 57 tackles despite nursing an arm injury for half the season.

The once-legendary San Francisco 49ers finally returned to the Super Bowl stage after almost a decade of failed playoff berths, partially thanks to the recent hiring of head coach Jim Harbaugh. Quarterback Alex Smith was benched after being injured in favor of the exciting Colin Kaepernick.

Holding the 49ers to just four losses and the second-fewest points allowed per game (17.1) was a defensive line littered with Pro Bowl players, including Justin Smith (66 tackles), Aldon Smith (19.5 sacks, a franchise record), and NaVorro Bowman (149 tackles). Experts couldn’t overlook the potential of Kaepernick and the 49ers, identifying San Francisco as the favorites to win.

On February 3, 2013, 71,024 unusually calm NFL fans took their seats in Mercedes-Benz Superdome in New Orleans, Louisiana — the tenth time "The Big Easy" hosted the championship game and the city's first Super Bowl since Hurricane Katrina ravaged the region in 2005. It cost fans about $1,200 (around $1,341.30 today) to watch the 49ers and Broncos duke it out on the field for the highly-sought-after Lombardi Trophy.

Yet, the classic Super Bowl Sunday got off to an unusual start when singer Alicia Keys took the stage to perform a "new take" on the Star-Spangled Banner. In what would be the longest National Anthem in Super Bowl history (156.4 seconds), Keys delivered a powerful rendition of the ballad before Jennifer Hudson — alongside a children's choir from Sandy Hook Elementary School — performed "America the Beautiful."

The coin-toss ceremony brought new Hall of Famers like Bill Parcells and Larry Allen to mid-field in a coin flip that ultimately landed on heads.

The first quarter of Super Bowl XLVII was amateur hour, at least for the San Francisco 49ers. The squad bungled multiple scoring drives by racking up penalties and losing possession to turnovers, giving the Ravens the leeway they needed to get on the board early.

The Ravens marched 51 yards before Flacco threw a 13-yard bullet to Boldin to secure the first Ravens touchdown of the night. Kaepernick kicked it into full gear practically immediately after that. The 49ers pressed 62 yards on plays to Michael Crabtree and Vernon Davis before kicker David Akers drove the ball directly through the uprights to cut Baltimore's lead to just 7-3.

The second quarter added points to the board on three occasions. Baltimore's Arthur Jones secured a loose ball to initiate a 75-yard drive by the Ravens. Ed Dickson advanced the Ravens 52 yards down the field before Flacco connected on a 1-yard touchdown toss to Dennis Pitta.

After flubbing one scoring opportunity, the Ravens racked up an extra seven points following a remarkable 56-yard touchdown reception by Jacoby Jones. And with zero seconds left in the half, Akers converted on another field goal for the 49ers to end the second quarter with the Ravens leading 21-6.

The Super Bowl halftime performances leading up to Super Bowl XLVII had a theme: Global stars that attracted middle-aged viewers. However, this league championship would be far different, as the NFL booked the global phenomenon Beyoncé, who just a few weeks earlier faced accusations of lip-syncing when performing the National Anthem at President Barack Obama's second inauguration.

Beyoncé's halftime performance began with an instrumental version of her hit song, "Run the World," playing as the pop sensation rose from beneath the stage. Beyoncé's setlist began with the a cappella melody from "Love on Top" before delivering a performance of her 2003 single, "Crazy in Love." The star sang a mash-up of "Baby Boy" and "End of Time," pairing her hits with stomp dancing and clones of herself following along with her choreography.

Many fans wondered if Super Bowl XLVII would bring a Destiny Child's reunion — it did. Michelle Williams and Kelly Rowland joined Beyoncé on stage so that the trio could sing tunes like "Bootylicious," "Independent Women," and "Single Ladies" — the latter of which has since gone quadruple-platinum.

The show ended on a far slower note with a stunning performance of "Halo" before the star shouted, "Thank you for this moment," before exiting the stage. Beyoncé's halftime show shined the spotlight on "girl power" and drew worldwide recognition, averaging over 268,000 tweets a minute during the show.

If the San Francisco 49ers were going to make a comeback, the third quarter was the time.

In a 108-yard kickoff return — the longest in history — Jacoby Jones darted into the end zone to give the Ravens an additional seven points, only 11 seconds in the second half. Then, mid-play, the stadium's lights went dark — a power outage lasting 34 minutes put the remainder of the game on a temporary hold. Fortunately, fans didn’t react much thanks to their smartphones

Minutes after the game resumed, Kaepernick led his squad 80 yards down the field on a drive ending with a 31-yard touchdown pass to Crabtree. Now trailing 28-13, the 49ers clinched their first touchdown of the night (Gore) and another Akers' field goal (34 yards) to chop the Ravens' lead to just 28-23.

The final quarter of this neck-and-neck Super Bowl match-up delivered a game that could’ve gone either way. Baltimore snagged another field goal to widen their lead to eight points, meaning the 49ers would need a touchdown and a two-point conversion to tie up the board.

Then Kaepernick bolted 15 yards into the endzone to give San Francisco a much-needed score (the two-point conversion failed). The Ravens added yet another touchdown and, in an exciting play, ran down the game clock in the end zone and gave up a safety to end the game 34-31.

Not only did Baltimore keep the 49ers from tying the Super Bowl win record, but each Ravens player also walked away with a neat $88,000 bonus (the 49ers earned $44,000 each).

Ravens quarterback Joe Flacco was at the height of his career going into Super Bowl XLVII, throwing for 3,817 yards and clinching 22 touchdowns throughout the season. 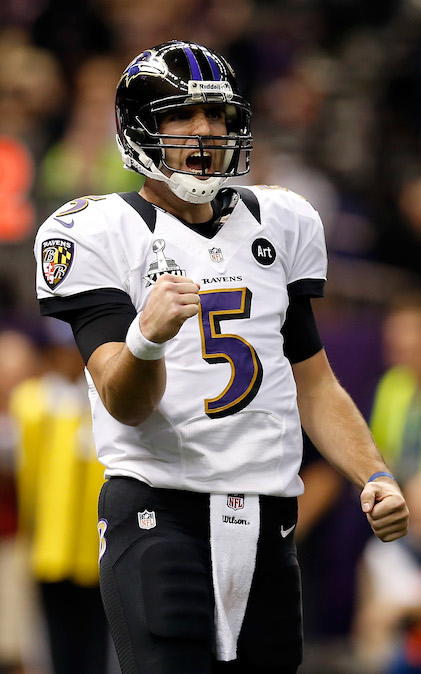 Flacco accomplishing this feat also made him the fourth-straight quarterback to capture the MVP title at the Super Bowl — following Drew Brees, Aaron Rodgers, and Eli Manning.

Super Bowl XLVII was one of the most-watched league championships in NFL history, with over 164.1 million viewers tuning in to the CBS broadcast at some point during the night — locking in a decent 46.4 Nielsen rating as well.

As was the theme with each passing Super Bowl, companies spent more and more on a coveted 30-second ad slot during the game. Now valued at $4 million per commercial, fans undoubtedly enjoyed ads like Psy doing his signature "Gangnam Style" dance in a Wonderful Pistachios commercial and a heartwarming Coca Cola ad showing the cultural diversity of America as "America the Beautiful" played in the background.

Both the Ravens and the 49ers neared Super Bowl XLVII coming off years of troubled playoff berths and mediocre regular-season records. The Ravens' pulling an upset victory allowed Baltimore to cover the 4.5-point spread.

It also appears that many experts thought the game would've been much tamer on the scoreboard, with a modest 48-point over/under going into the contest. The 65 points scored in Super Bowl XLVII fell into "over" territory by a massive 17 points, making it a safe bet. 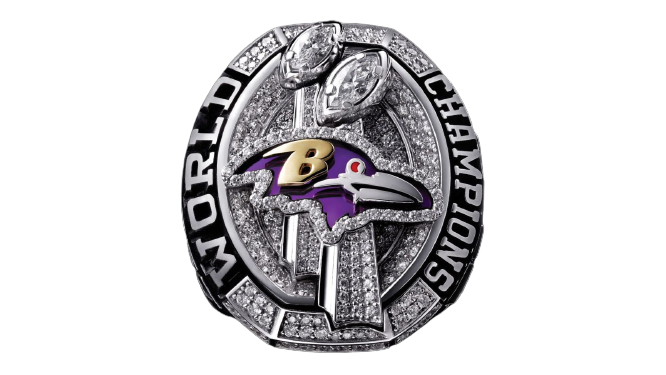 Super Bowl XLVII gave viewers a much-awaited upset victory, but very few folks call this match-up by its proper name today. Instead, many refer to Super Bowl XLVII as the "Har-Bowl," "Super Baugh," or even the "Blackout Bowl." It also signified the first Super Bowl match-up in which the coaches from both teams scheduled a joint press conference to celebrate their brotherhood and upbringing.