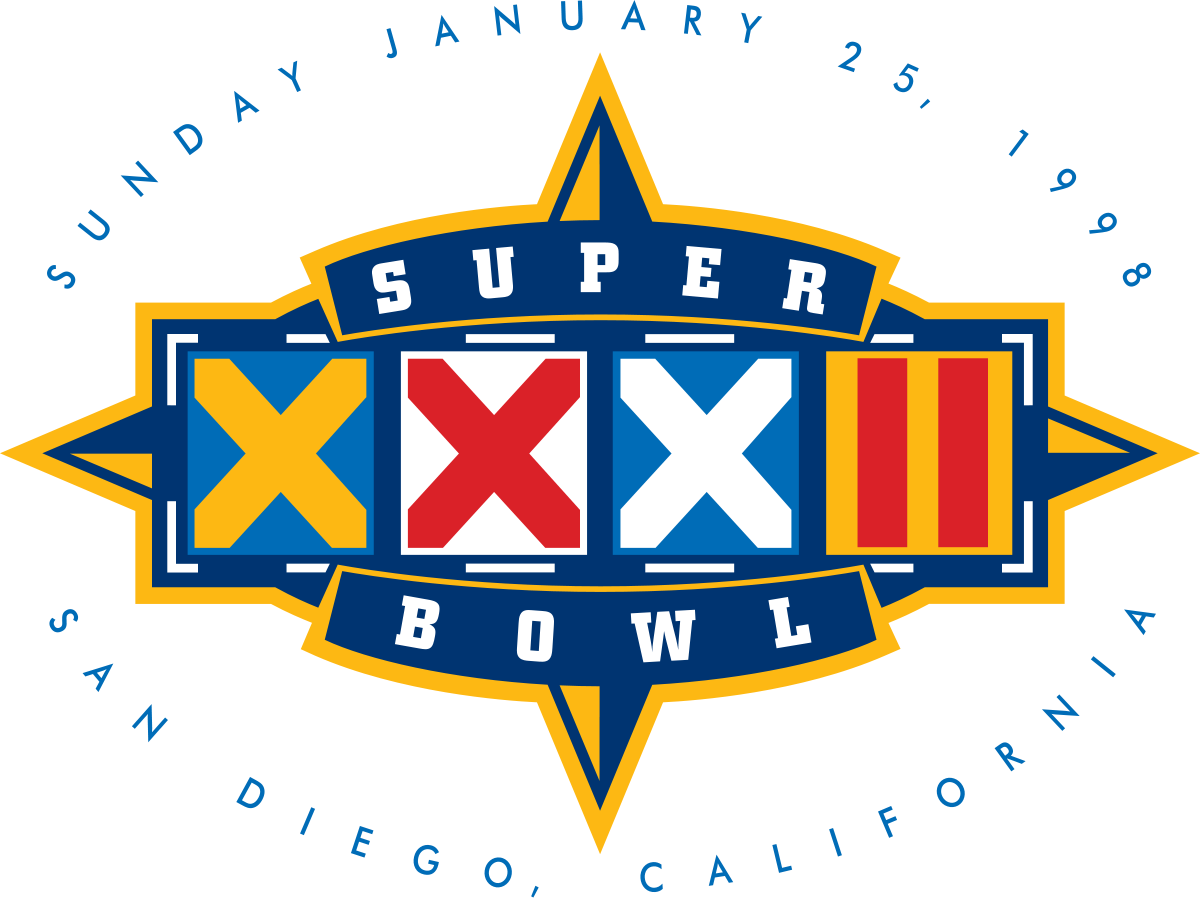 A victory at Super Bowl XXXII would've been a meaningful moment for both teams. The Green Bay Packers ended the previous 1996-97 season on a high note with their first Lombardi Trophy in three decades. On the other hand, the Broncos sought franchise retribution, having fallen in their last four Super Bowl appearances and leaving empty-handed each time. A Denver victory would've also slashed the NFC's record 13-game win streak at the Super Bowl.

January 25, 1998, delivered a Super Bowl upset like never before in history, pinning two of the most well-known NFL quarterbacks against one another: John Elway and Brett Favre.

The Lead-Up to Super Bowl XXXII

The Denver Broncos were a team known for qualifying for Super Bowls but never once walking away with a Vince Lombardi Trophy of their own — the Broncos scored a mere 50 points on the Super Bowl stage while their opponents nabbed over three times that (163). Recent seasons widened the coaching staff's talents to include the former 49ers offensive coordinator Mike Shanahan while recruiting unquestionably talented draft picks like running back Terrell Davis.

The 1997-98 Broncos season established a brand new Denver team, with the #1 offense in the league (5,872 yards), most points scored (472), and a decent 12-4 record. Quarterback John Elway successfully guided the team to his fourth-ever Super Bowl by amassing 27 touchdowns and 3,635 yards during the regular season.

But while players like tight end Shannon Sharpe (1,107 receiving yards) held Denver together on offense, the defensive line shined even brighter. Neil Smith of the Chiefs joined the squad and clinched 8.5 sacks while linebacker John Mobley led the defensive line with 97 tackles.

The Green Bay Packers couldn't have been more qualified for Super Bowl contention in 1998. The team managed to amass season-long accomplishments like the NFC Central title, 13-3 record, the second-most points scored in the league, and a brute-force defense known for keeping opponents off the board.

The defensive roster in Wisconsin also excelled on the turf, with players like Reggie White (11 sacks), safety Eugene Robinson (74 tackles), and cornerback Mike Prior (four interceptions) leading the Packers to the fifth-best defense in the NFL.

Both the Broncos and Packers fairly earned their spots in Super Bowl XXXII, but the Broncos had a far tougher journey through the playoffs. After narrowly defeating their final two opponents in the postseason (by a matter of one score), Denver qualified for the Super Bowl by "sheer luck."

On January 25, 1998, 68,912 enthusiastic football fans took their seats at Qualcomm Stadium in San Diego, California — only the second time in NFL history that "America's Finest City" hosted the league championship (the first was in 1988). Fans shelled out around $275 for a Super Bowl ticket (valued at $439.30 today) to watch the Packers defend their title.

The Green Bay Packers began Super Bowl XXXII with similar momentum after their previous league championship. The trio of Favre, Levens, and Freeman single-handedly pressed 76 yards down the field until Freeman finally nabbed his first touchdown of the night: A 22-yard lob that led him into the end zone on the Packers' opening drive. However, the Broncos didn't let this early Packers' lead hinder their spirit.

After a triumphant 32-yard kickoff return by Vaughn Hebron, a holding penalty, and three yard-earning plays by Terrell Davis, the Broncos "answered" with Davis's 1-yard-touchdown. The tit-for-tat touchdowns in the first quarter marked the first time in Super Bowl history that both teams snagged touchdowns on their respective opening drives.

The Broncos scored once more hardly five minutes after their game-tying touchdown. Elway led Denver on a 45-yard advance before scoring a 1-yard touchdown of his own on a fake handoff to Davis, claiming a new 14-7 lead over the reigning Super Bowl champions.

Just before this play, Terrell Davis momentarily left the field following the onset of a severe migraine that made seeing difficult. The Broncos continued with a caliber of playing foreign for the once struggling NFL team. Favre fumbled the ball after a sack by safety Steve Atwater to return possession to the Broncos mere minutes after their last touchdown.

Denver settled for a 51-yard field goal by kicker Jason Elam to boost the Broncos' lead to 17-7. The squads traded punts before the Packers pressed 95 yards in seven minutes to secure one last touchdown before the end of the second half — a 6-yard pass to tight end Mark Chmura.

Considering the previous halftime show featuring ZZ Top, James Brown and the Blues Brothers didn't go according to plan, Super Bowl XXXII was a chance for the NFL to recover its waning halftime audience. The first performers of the night were The Temptations, a Motown act known for their classic ballad, "My Girl."

The Motown quintet began with their hit tune "Get Ready" before offering a live cover of The Four Tops' "Sugar Pie Honey Bunch," a song sure to get the fans at home tapping their feet. The Temptations briefly exited stage left and handed the show over to Smokey Robinson for a noticeably slower "The Track of My Tears" performance.

Not a minute later, the Temptations returned to sing the long-anticipated "My Girl." However, the Motown-themed Super Bowl XXXII halftime show took a bizarre twist when Queen Latifah and Boyz II Men performed little-known songs that hardly meshed with the previous acts. The unusual halftime show ended with a heart-thumping performance by the Grambling State University Marching Band and a firework display that kept the night’s excitement alive.

After a rough tackle of Elway (a play humorously called "The Helicopter"), Davis crossed one yard into the end zone for his second touchdown of the night. By the end of the third quarter, Denver led 24-17.

The two teams swapped touchdowns in the fourth quarter before the game drew to an unexpected close. It took Green Bay no more than 90 seconds in the final period to score on a 13-yard pass to Freeman on a confusing criss-cross play. Yet, the Broncos wouldn't let a repeat Packers victory be an option.

The two squads traded punts before Packers coach Mike Holmgren encouraged his defensive line to allow a Broncos touchdown, knowing Denver was trying to run the clock down. The Broncos D-line allowed Davis to rush one yard for a touchdown — his third of the night. However, the Broncos couldn't recover in the remaining 1:45 or force overtime.

With that, the Broncos pulled a staggering upset over the favored Packers for a 31-24 victory and an end to their four-game Super Bowl losing streak. The Broncos walked away with a $48,000 bonus per player while the Packers line-up earned just $29,000 each. 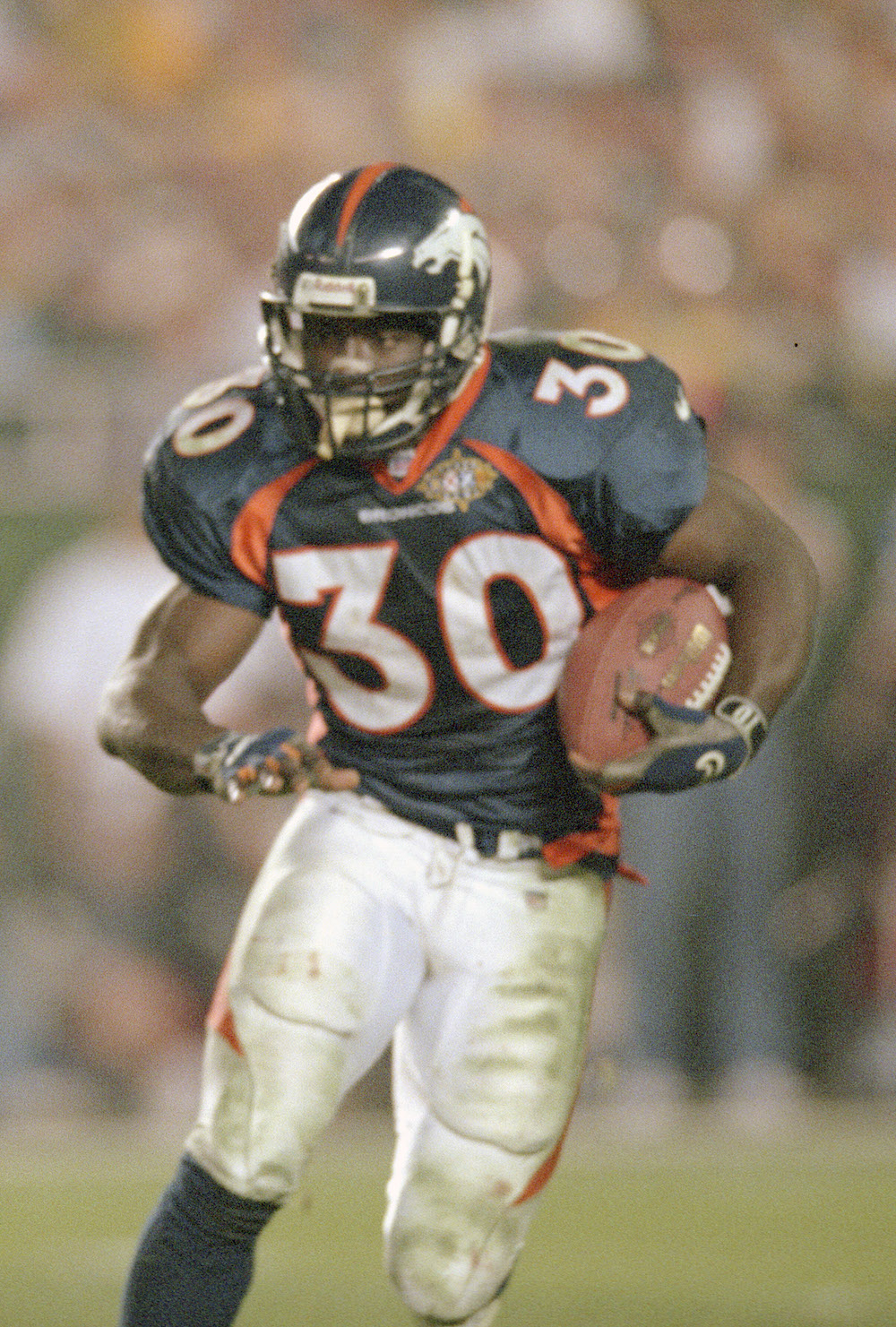 Had Davis sat out for the remainder of the game after suffering a severe migraine in the second quarter, the Broncos wouldn't have cashed in on his two second-half touchdowns. Many fans credit this standout running back for Denver’s first-ever Super Bowl title.

With the possibility of the Green Bay Packers winning their second back-to-back title on the line, fans across the nation didn't squander their opportunity to catch Super Bowl XXXII live. Over 133.4 million viewers clicked over to NBC from coast-to-coast, yielding the network an impressive 44.5 Nielsen rating.

Super Bowl XXXII also marked the last time in 33 years that NBC held broadcasting rights of the AFC and the beginning of an NFL drought on the network for another eight seasons. Interestingly, Super Bowl XXXII was also the last to air in Canada, the UK, the Philippines, and Mexico until Super Bowl broadcasts resumed in the early-2000s.

Despite being the end of an era, the fans at home had a unique privilege while tuning in to the big match-up: High-tech computer graphics to animate the routes and patterns mid-game. Viewers across the nation also enjoyed memorable ads, including a Doritos 3Ds commercial ending on the catch-phrase "Ay chihuahua!" and a six-part Budweiser commercial featuring a lizard and frogs reappearing throughout the night.

The Green Bay Packers were absolute favorites to win Super Bowl XXXII. Not only were the Packers the reigning Super Bowl champions vying to defend their title, but they also nabbed the second-most points in the league and easily cruised through the playoffs. Meanwhile, the Broncos had never shown themselves to be a Super Bowl-ready team, falling in four previous match-ups and faced a far tougher season ending with a hard-fought 12-4 tally.

The Packers neared Super Bowl XXXII expected to win by double-digits: 11 points. However, the experts drastically underestimated the Broncos and their league-leading offensive line (5,872 total yards and 472 points). The Broncos didn't only win the match-up and end the Packers' attempt at back-to-back victories, but they also covered the spread — the first time the predicted double-digit winner wound up losing.

And the 49-point over/under narrowly crept into "over" territory with 55 total points. 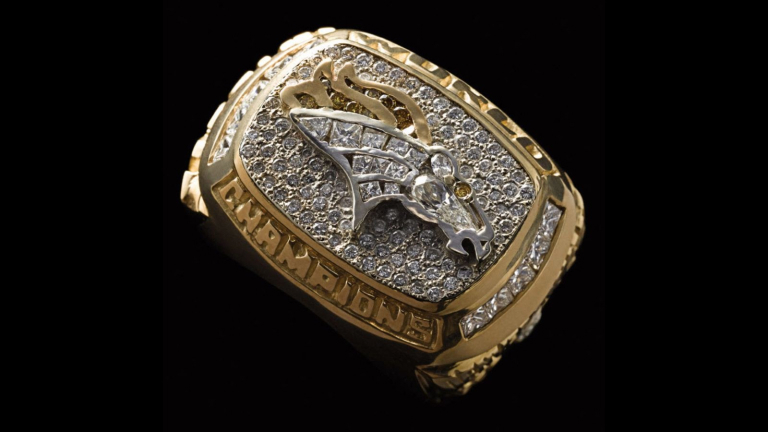 The Broncos successfully shut the Packers down before Green Bay could secure back-to-back titles once more. And like so many teams before them, the Broncos used their Super Bowl victory and carried it over into the next season. The Broncos qualified for their sixth-ever franchise Super Bowl spot during the following season — but would they win again?