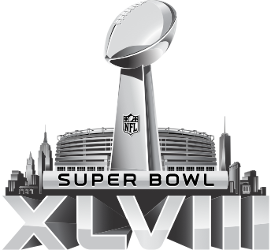 Super Bowl XLVIII had the potential to be one of the greatest matchups in Super Bowl history. Not only were both teams No. 1 in their respective conferences, but the game featured the top-rated defense (Seattle Seahawks) and highest-scoring offense (Denver Broncos) in the entire NFL. However, the pairing was anything but close, and the game ended in one of the worst blowouts in NFL history, with the winning team capturing the "W" by a whopping 35-point margin.

February 2, 2014, marked a Super Bowl with unusual nicknames, including the "Weed Bowl" and "Marijuana Bowl," a play on words and a nod to both Washington and Colorado being among the first few states to legalize marijuana.

By the time you're done reading this article, you'll know how much ticket costs skyrocketed for this match-up, which headliner delivered a record-breaking halftime show, and how one team covered the spread by 37.5 points.

The Lead-Up to Super Bowl XLVIII

The Denver Broncos cruised through the 2013-14 season to capture a 13-3 regular-season record and endless accolades for their record-breaking offensive roster. On top of ending the season with the most points scored ever in a single season (606), the Broncos also captured 7,313 total yards, 13 games where they scored 30+ points, and nine games in which the squad scored in the opening drive.

Leading the Broncos was 16-year veteran Peyton Manning. Manning's 2013-14 performance was arguably the best in his entire career, capturing 5,477 yards, 55 touchdowns, and 450 completions. However, Manning couldn't have accomplished these feats without the aid of the Broncos' star-studded rushing and passing game.

Receiver Demaryius Thomas (1,430 yards), running back Knowshon Moreno (1,038 rushing yards), and kicker Matt Prater (25/26 for field goals) allowed Denver to nab a spot at the Super Bowl with little resistance. Additionally, the brute force defensive line consisting of anchors like Danny Trevathan (129 tackles) and Shaun Phillips (ten sacks) reluctantly led many to believe that the Broncos had this Super Bowl in the bag.

Despite racking up three losses during the 2013-14 season, the Seattle Seahawks (13-3) boasted one of the strongest teams all-around. New quarterback Russell Wilson — who narrowly defeated two other top-notch quarterbacks for the starting position — ended the season with 3,357 yards, 26 touchdowns, and one of the best passer ratings in the league (101.2).

Adding to the Seahawks' season-long 417-point tally were players like running back Marshawn Lynch (1,257 rushing yards), kicker Steve Hauschka (143 points and 33/35 on field goals), and Golden Tate (898 yards). But the defensive line is where Seattle topped every other team in the entire league.

The Seahawks held opponents to just 231 points, an average of 273.6 yards per game, and 39 takeaways — ranking No. 1 for all and earning the title of "best defense in the NFL." Opponents couldn't overcome the likes of linebacker Bobby Wagner (120 tackles), cornerback Richard Sherman (eight interceptions), and a secondary with the moniker "Legion of Boom."

On February 2, 2014, around 82,529 fans loaded into MetLife Stadium in East Rutherford, New Jersey — the home stadium of both the Giants and Jets and the first outdoor artificial turf Super Bowl since 1976. Fans excitedly shelled out $1,500 (about $1,649.86 today) for the average ticket to the match-up, a lofty $300 price hike since the previous season.

Yet, it came as no surprise that the pre-game festivities for Super Bowl XLVIII featured talent from both New York and New Jersey, given the two states were “co-hosting” the event. Super Bowl Sunday started with performances by both the Syracuse and Rutgers marching bands, later followed by an “America the Beautiful” rendition featuring Newark-native Queen Latifah and a local children’s choir.

Super Bowl XLVIII got off to an unusual start with a rare botched play by Peyton Manning. A mistimed snap while transitioning into another field formation allowed the ball to soar past Manning and bounce into the end zone. Knowshon Moreno luckily recovered the ball, but he was tackled in the end zone to give the Seahawks a safety. The Seahawks led 2-0 just 12 seconds into the game — the fastest points scored in any Super Bowl ever.

The Seahawks then added four unanswered scores to the board by the end of the first half. The first two were field goals snagged by Steven Hauschka (31 and 33 yards, respectively) to slightly widen Seattle's lead to 8-0. Early in the second quarter, an interception, 15-yard run by Harvin, and a pass interference penalty brought the Seahawks to the 1-yard-line and itching to score their first touchdown of the night.

Marshawn Lynch capitalized on this opportunity to leave the Broncos trailing 15-0. That was when Peyton Manning and the Broncos, desperate to keep the game within reach, attempted to add their first points to the board. However, a rushed pass by Manning allowed the ball to float directly into Malcolm Smith's grasp. Smith evaded tackles as he secured a 69-yard touchdown run, giving the Seahawks a loftier 22-0 lead — one of the largest halftime margins in history.

The Super Bowl XLVIII halftime show got off to an unusual start when a local children's choir began singing the opening verse of "Billionaire," a Travie McCoy song featuring Bruno Mars. The once-dark stadium then suddenly had a spotlight focused on a drum set, where Bruno Mars — dressed in a gold blazer — banged out a captivating riff on drums to start the show with a visible display of musical talent.

The moving stage brought Mars front and center to begin a performance of "Locked Out of Heaven," later segueing into his recent hit, "Treasure." Mars offered a rock-solid rendition of his lesser-known "Runaway Baby" before The Red Hot Chili Peppers — shirtless and dressed in their stereotypical concert garb — joined him on stage for a classic RHCP concert. The rock band and Mars' band joined forces for a massive group performance of their early hit "Give It Away."

The show shifted gears to a slower pace as videos of military members graced the big screen against the backdrop of Mars' "Just the Way You Are" and an exciting firework display. Though this halftime performance topped Madonna's 114 million viewers just two years earlier, some rock fans were disappointed that The Red Hot Chili Peppers relied on a musical track instead of playing their instruments live. However, this was standard on the Super Bowl stage.

While the Seahawks sat comfortably with a 22-point lead, the team didn't let up on either offense or defense. Seattle's Harvin snatched the initial kickoff out of the air and successfully returned it 87 yards for an early touchdown — another 12-second touchdown for the Seahawks. The Broncos finally faced another potential scoring opportunity, which the #1 offense in the league bungled once more.

A loose ball recovery by Malcolm Smith allowed the Seahawks to take off on yet another scoring-drive that ended on a touchdown pass to Jermaine Kearse — who evaded four tackles on his 23-yard spring down the field. Denver finally added points to the scoreboard by the time they were trailing 36-0. The Broncos marched 80 yards down the field in a drive that ended on a 14-yard touchdown reception (Demaryius Thomas) and a rare successful two-point conversion.

The Seahawks nabbed another touchdown — this time a 10-yarder by Doug Baldwin — to give Seattle an unthinkable 43-8 lead that the Broncos couldn’t recover from. Seattle players earned every penny of their $92,000 bonus for winning Super Bowl XLVIII.

The Seahawks' offensive talent was on full display in their 43-8 near-blowout of the Denver Broncos, but the MVP pick ended up being linebacker Malcolm Smith.

However, Seahawks fans weren't surprised by the MVP selection. After all, Smith also played a vital role in the team's final playoff victory against the 49ers after nabbing an interception and clinching a 23-17 win over the Niners.

The Super Bowl XLVIII matchup was as even as they come, with both the Seahawks and Broncos nabbing 13-3 records as well as the No. 1 seeds in their respective conferences. Americans didn't sacrifice the chance to watch these star-studded teams duke it out on the turf, capturing a record number of viewers at the time: 111.5 million and a 46.7 Nielsen rating. Plus, an extra 3.8 million folks flipped over to Fox to catch the wildly captivating Bruno Mars' halftime show.

Many techies across the nation enjoyed Fox's attempt to expand viewership, offering free streaming through its Fox Sports Go app available for download on tablets and computers. Super Bowl XLVIII also marked the first-ever Spanish telecast of the league championship to air in America (on Fox Deportes), a move that attracted over 561,000 viewers in the United States.

Similar to years past, countless big-name companies jumped at the chance to advertise to a crowd of over 100 million, even with its $4 million price tag for a simple 30-second ad slot. One of the most memorable commercials of the night included Budweiser's now-famous "Puppy Love" commercial.

The Seattle Seahawks' defeating the Denver Broncos presented one of the most surprising upsets in Super Bowl history, which was also evident at the betting table. Many assumed that the scoreboard would've been far more balanced in a battle between the #1 offense and #1 defense in the league — a predicted deadlock on the gridiron.

They were wrong — the team expected to lose by 2.5 points managed to cover the spread by a whopping 37.5 points in the largest underdog upset in Super Bowl history. Interestingly, the over/under bet was nearly accurate. With a 47.5-point over/under determined before kickoff, the 51 total points scored in the match-up secured "over" bettors a nifty payout. 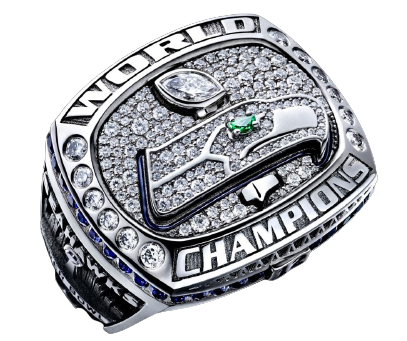 The Seahawks put forth one of the best on-field performances in recent history, but the team wasn't content with just one Super Bowl title. Like so many championship teams before them, the Seattle Seahawks returned for another shot at the Lombardi Trophy during the following season.

Their new opponents were far more intimidating than the top-ranked Broncos — can you guess who they faced off against?