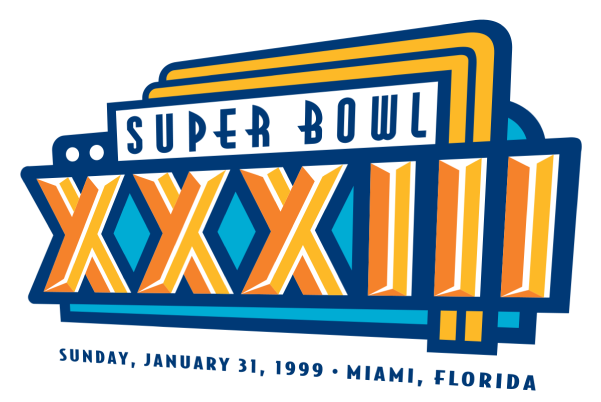 The team historically known for blundering Super Bowl matchups managed to win their first Super Bowl and qualify for another. The Broncos neared Super Bowl XXXIII with an excited fan base and a looming question about legendary quarterback John Elway: Would he retire? And with a brand new coaching staff featuring a former Broncos coach, their opponents — the Atlanta Falcons — hoped to bring pride back home to Georgia in their first-ever Super Bowl.

January 31, 1999, marked the last Super Bowl of the millennium, though the Falcons-Broncos battle didn't quite live up to the hype. By the time you're done reading this article, you'll know which former halftime performer made her big return to the Super Bowl stage, how much advertisers paid for a measly 30-second ad slot, and whether John Elway would retire on a second Super Bowl win.

The Lead-Up to Super Bowl XXXIII

The Denver Broncos hailed victorious during Super Bowl XXXII, but quarterback John Elway — now 15 years into his NFL career — was presumably nearing the point of retirement. Elway led the team to a 13-game win streak early in the season and finished out the game calendar with a 14-2 record, the No. 1 seed in the NFC, and the second-most points in the NFL (501). However, Denver's on-field offensive star power played an even more pivotal role than imagined.

Running back Terrell Davis (2,008 rushing yards and 23 touchdowns), wide receiver Ed McCaffrey (1,053 yards on 64 receptions), and running back Vaughn Hebron (1,216 kickoff return yards) helped the Broncos secure yet another shot at a Super Bowl title. And though the defensive squad in Colorado wasn't as remarkable as its offense, Denver still managed to hold its opponents to the eighth-fewest points in the NFL.

The Atlanta Falcons had been on an upward trajectory going into the 1997-98 season, ending on a high 14-2 regular-season record and advancing to their first-ever league championship in franchise history. Leading the pack in Georgia was former Broncos head coach Dan Reeves, who helped Elway and the Broncos advance to the Super Bowl on three separate occasions.

Many fans eagerly awaited the matchup for one reason: It would pit Elway against his former head coach. Elway's appearance at Super Bowl XXXIII made him the first-ever NFL player to start in five league championships, and it was rumored that Elway would retire after the game. Meanwhile, coach Dan Reeves was still recovering from a coronary bypass.

On January 31, 1999, 74,803 NFL enthusiasts poured into Pro Player Stadium down in Miami, Florida — the eighth-ever time "The Magic City" delivered a Super Bowl match-up. The league revealed a $50 price hike from the previous Super Bowl, with fans paying about $325 for a ticket (worth a massive $507.96 today).

Gameday festivities began with Beverly Hills, 90210 actress Tori Spelling narrating a cruise adventure while the rock band KISS performed a high-intensity, pyrotechnic-laden concert. The star-power continued into the National Anthem with a performance by the "Goddess of Pop," Cher. And in a high-profile coin toss ceremony (tails), standouts from the sudden-death “Greatest Game Ever Played" from 1958 gathered mid-field to start the night off right.

The Atlanta Falcons got off to a fantastic start early in Super Bowl XXXIII. Wide receiver Tim Dwight carried the ball 31 yards down the field on the opening kickoff before the Falcons added an extra 25 yards on a pass interference penalty and another 31 yards on a rush by Jamal Anderson. After facing a fourth down, coaches sent kicker Morten Andersen onto the field to nab a 32-yard field goal for a 3-0 lead.

The Broncos trekked 80 yards down-field on the ensuing drive in response — which included a long-shot 41-yard pass to Rod Smith — until Howard Smith stumbled into the end zone on a 1-yard scoring run.

Now leading 7-3, Denver pressed on. The Broncos ventured 63 yards into Falcons territory, a drive ending on a 26-yard field goal by kicker Jason Elam. The Broncos took their next possession in stride as well with a surprising 80-yard touchdown reception by wide receiver Rod Smith, though viewers at home missed the miraculous play due to a mistimed commercial. Atlanta closed out the first half on Andersen's second successful field goal, leaving the Falcons trailing 17-6.

The Super Bowl XXXIII halftime show began with an unexpected appearance by E.T. and the self-proclaimed "swing revival band" Big Bad Voodoo Daddy performing their song "Go Daddy-O." Both opening acts were an interesting choice given E.T. hit the box office 17 years earlier, and the pre-game had such a high-profile opening act in KISS.

Fortunately, the atmosphere in Pro Player Stadium took an exciting turn when Stevie Wonder reclaimed the stage to honor jazz legend Duke Ellington's 100th birthday with a rendition of "Sir Duke." Wonder continued with an incredible mash-up of songs like "You Are The Sunshine Of My Life" and "I Wish" as tap dancer Savion Glover performed alongside the musical sensation.

Gloria Estefan took over in her first Super Bowl halftime performance since the "Winter Magic" show in Super Bowl XXVI. Estefan redeemed her previous performance with a mash-up of classics like "Turn the Beat Around" alongside glow stick-wielding dancers adding a retro vibe to the show. The show ended by bringing both Estefan and Wonder on stage to sing memorable lines from chart-topping ballads before the incredibly well-designed concert drew to a close.

The second half got off to a rocky start for both teams. After two missed Broncos field goals and two interceptions of Chandler's passes, the Broncos finally found themselves on the 5-yard-line. Griffith secured two short running plays, the last one being a 1-yard rush for a touchdown. Though Denver led with a seemingly unrecoverable 24-6 lead early in the fourth quarter, the teams would split four more scores before the game clock expired.

The first began on an interception by Denver's Gordon, who carried the ball 50 yards. Terrell Davis advanced an extra 39 yards down the field before Elway clinched a 3-yard touchdown run himself. However, the Falcons scored their own touchdown on the very next play — a 94-yard kickoff return by Dwight that finished in the end zone. Denver then made good on an onside kick strategy that allowed a quick recovery and a later 37-yard field goal by Elam.

Atlanta scored one final time on a 3-yard pass to Terance Mathis, an extra six points for the Falcons (the two-point conversion failed). The Broncos handily ran down the clock to secure back-to-back Super Bowl victories with a final game score of 34-19. All players walked away with a payout: Denver clinched a $53,000 bonus, and Atlanta walked away with a $32,500 check.

Broncos quarterback John Elway didn't only walk off the Super Bowl field with the coveted MVP honor. At 38, he also became the oldest player in history to receive this award. 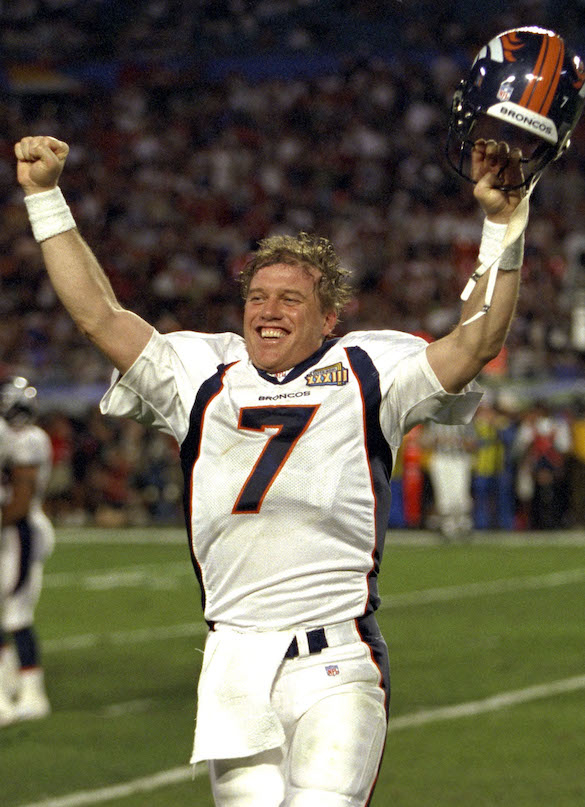 As many Denver fans predicted, Elway hung up his cleats following the 1998-99 season. Elway ended his NFL career on a high note, with 51,475 passing yards, 3,407 rushing yards, and 300 passing touchdowns throughout his career.

More than 127.5 million viewers watched as the Denver Broncos earnestly defended their championship against the Atlanta Falcons, though the 40.2 Nielsen rating was unremarkable. What did capture the attention of millions of viewers was a wide selection of unforgettable commercials. Now charging upwards of $1.6 million for a 30-second slot, ads included:

After the Broncos successfully defended their title, the Family Guy pilot aired nationwide — only the fourth series to premiere post-Super Bowl that later became a hit.

The Denver Broncos neared the season with the wind at their backs. The Broncos were the reigning champions, still had quarterback John Elway at the helm, and held a conference-best 14-2 record. The Atlanta Falcons, on the other hand, were a team appearing at their first league championship in franchise history. The squad somehow managed to turn its previous 7-9 record into an impressive 14-2 record, pulling an upset over the 15-1 Vikings during the playoffs. 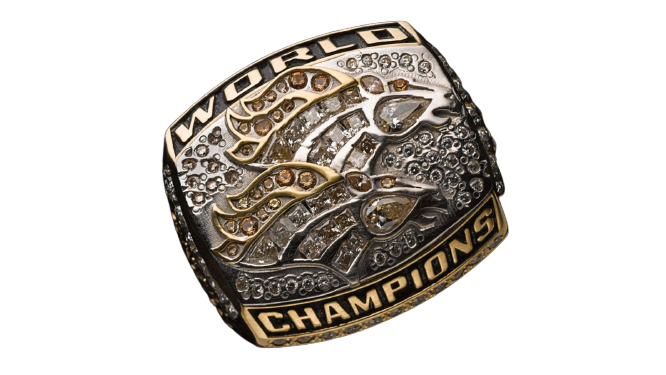 Though not wildly exciting by any means, Super Bowl XXXIII allowed Broncos quarterback John Elway to retire on an ultra-high note — with back-to-back Super Bowl wins, the first in Broncos franchise history. But while the Broncos and the Falcons left it all on the field, neither made a come-back. In fact, the Atlanta Falcons wouldn't see Super Bowl contention for another 17 years until 2016.