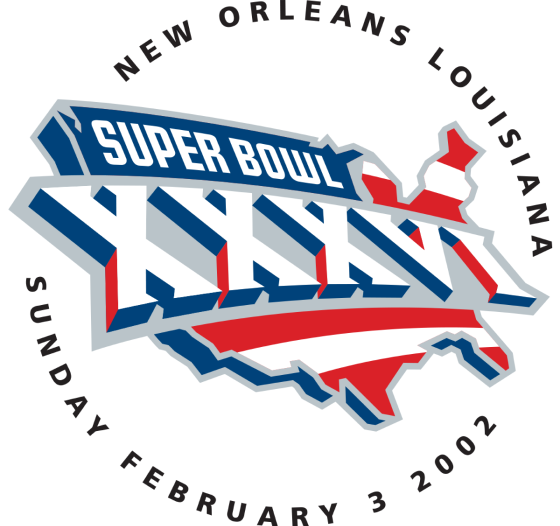 The events of September 11th, 2001 changed not only America, but the world forever. In the months following the tragic events many questioned whether it was safe or appropriate to continue having sporting events, especially such a large event such as the Super Bowl. In the end, America needed these events to heal and to learn to enjoy life again. Also, they refused to live in fear of terrorists and allowed for the 2002 event to take place.

What followed was a memorable Super Bowl, seeing the New England Patriots secure a hard-fought victory over the St. Louis Rams. It would mark the first of several Super Bowl wins for the Patriots. Not only that, but U2 had one of the most memorable half-time shows in history. One of the first major sporting events since the tragedy of 9/11, this Super Bowl marked a point of healing for America.

The Lead-Up to Super Bowl XXXVI

The 2002 Super Bowl was unique as it was the first game played in February as opposed to the end of January. Following the September 11th attacks, the season was postponed a week, requiring for the championship game to be delayed.  The season ended with two teams with promising quarterbacks leading their teams to a hopeful victory.

The Rams were helmed by Kurt Warner who led the team to their third Super Bowl appearance and a hopeful repeat of their 1999 win. The 14-2 Rams also had the “Greatest Show on Turf” offense led by offensive coordinator Mike Matz.  With such a tough offensive unit, the Rams were favored to take the game.

Opposite them were a hungry New England Patriots led by second year quarterback Tom Brady. The team finished with an  impressive 11-5 and ranked 6th overall in scoring that year. This would be the Patriots’ third Super Bowl appearance. Their previous outings had left them going home empty-handed; this young team hoped to change their luck.

New England’s 2001 season began with a rough start. Before the beginning of the season, the team’s quarterback coach Dick Rehbien died of a sudden heart attack which hurt the team morale going into the season. They lost their first 2 games, and starting quarterback Drew Bledsoe was sidelined by a sheared blood vessel during a game with the New York Jets. He was replaced by second year quarterback Tom Brady, who had only thrown 5 passes in the 2000-2001 season.

To the surprise of many, in his first outing Brady led the team to a 44-13 win over the Indianapolis Colts. The team finished the regular season 11-5. Brady enjoyed a 63.9 completion record with 18 touchdowns and 12 interceptions. Had destiny not had other plans, Brady would have been a cinch for the Pro Bowl that season.  The offense also had the likes of wide receivers Troy Brown who had 101 receptions and 5 touchdowns, and   David Patten with 55 catches and 4 touchdowns.

This would be the Patriots’ third Super Bowl appearance. In the previous two outings they had come home empty-handed. They hoped that the third time would be a charm.

The St. Louis Rams were coming off a series of highs and lows since their 1999 Super Bowl win. While their defense was struggling, they had one of the best offenses from 1999-2001 which garnered them the nickname “The Greatest Show on Turf." In 2001 Kurt Warner won his second NFL MVP Award after throwing for 4,830 yards and 36 touchdowns, with 22 interceptions. Running back Marshall Faulk won the Offensive Player of the Year Award in 2001 and set a record for over 2,000 rushing yards over four seasons.  The offense also boosted wide receivers Tony Holt and Issac Bruce who each had over 1,000 receiving yards and scored a combined 13 touchdowns. The offensive line was protected by the likes of Adam Tinnerman and Pro Bowler Orlando Pace.

The Rams also had some added momentum going into this game. The Rams had already beaten the Patriots at home that season. On ESPN’s November 18 Sunday Night Game the Rams wore down the Patriots to a 24-17 victory. As if predicting the future, Rams coach Mike Martz called the Patriots a “Super Bowl-caliber team.”

This Super Bowl would be the beginning of the New England Patriots’ dynasty that would last for the next several years. It would be their first of 6 NFL Championship wins with the most recent being in 2018. The game would also solidify Tom Brady as a franchise quarterback for the Patriots and a certified future Hall of Famer.

Super Bowl XXXVI marked a third Super Bowl appearance for each team. The Rams hoped to win their second championship in three years, while the Patriots sought their first win.

The game was also unique because of the extra security measures after the 9/11 attacks. It was the first Super Bowl to be designated a National Security Special Event (NSSE) by the Department of Homeland Security (DHS). From then on, all Super Bowls would have this security designation.

This would also mark the last Super Bowl played in New Orleans before Hurricane Katrina hit the city in 2003. The Super Bowl would not return to the Superdome until 2013.

In another historic moment, President George W. Bush became the first president to participate in the opening coin toss in person (Regean had done the honors via satellite in 1985). He was joined by Dallas Cowboy and Hall of Famer Roger Staubach. The Rams one the coin toss with heads.

It was midway through the first quarter before the Rams made the first score of the game with a 50-yard field goal by Jeff Wilkins. At the time it was the third longest field goal in Super Bowl history.  This would be the only goal of the quarter as both teams' defenses held their ground, forcing either punts or field goal attempts.

The Rams started the second quarter with an impressive drive to the New England 34-yard line. However, Warner would throw an incomplete pass on the third down. Wilkins 52-yard attempt would prove no good to put points on the board. A blitz later in the quarter by Mike Vrabel caused Warner to throw an interception to Ty Law. Law was able to run the ball back for a 47-yard touchdown, giving the Patriots the lead at 7-3. A later Rams fumble allowed Brady to complete two passes to Troy Brown and then David Patten for a touchdown with seconds to go. The half ended with the Patriots with a surprising 14-3 lead.

Irish rock band U2 was the half-time entertainment. They opened with their recent hit “Beautiful Day”. The band then performed “MLK” and “Where the Streets Have No Name” while a banner behind them scrolled the names of those that lost their lives in the 9/11 attacks. At the end of the performance, lead singer Bono opened his jacket to show an American flag. The performance was praised as a fitting tribute to those that have lost their lives and is ranked as one of the best halftime shows in history.

The Patriots received the kickoff for the second half, but could only reach the Rams 43-yard line. The Rams, with the help of some lucky penalties on Otis Smith got within the Patriots’ 41-yard line. However, after taking a sack for a 9-yard loss, Warner threw two incomplete passes and was forced to punt. Both teams’ defensive lines held firm, but the Patriots were able to score a field goal to further their lead 17-3

The Rams tried for a touchdown early in the fourth, but it was fumbled and ran back 97-yards by Tebucky Jones. However, the play was nullified on a hold call, and the Rams were able to drive the ball in for a touchdown, closing the gap 17-10. Through the rest of the quieter, there was more of the defensive back and forth. With 1:51 left, Warner ran a series of completions that tied the game 17-17. With seconds left, many believe the Patriots would run the clock and go into overtime. Instead, Brady drove the ball within field goal range. With time running out, Adam Vinatieri booted the ball between the uprights for the win.

New England quarterback Tom Brady was the MVP of Super Bowl XXXVI. His ability to find his offensive players allowed his team to win their first NFL Championship. 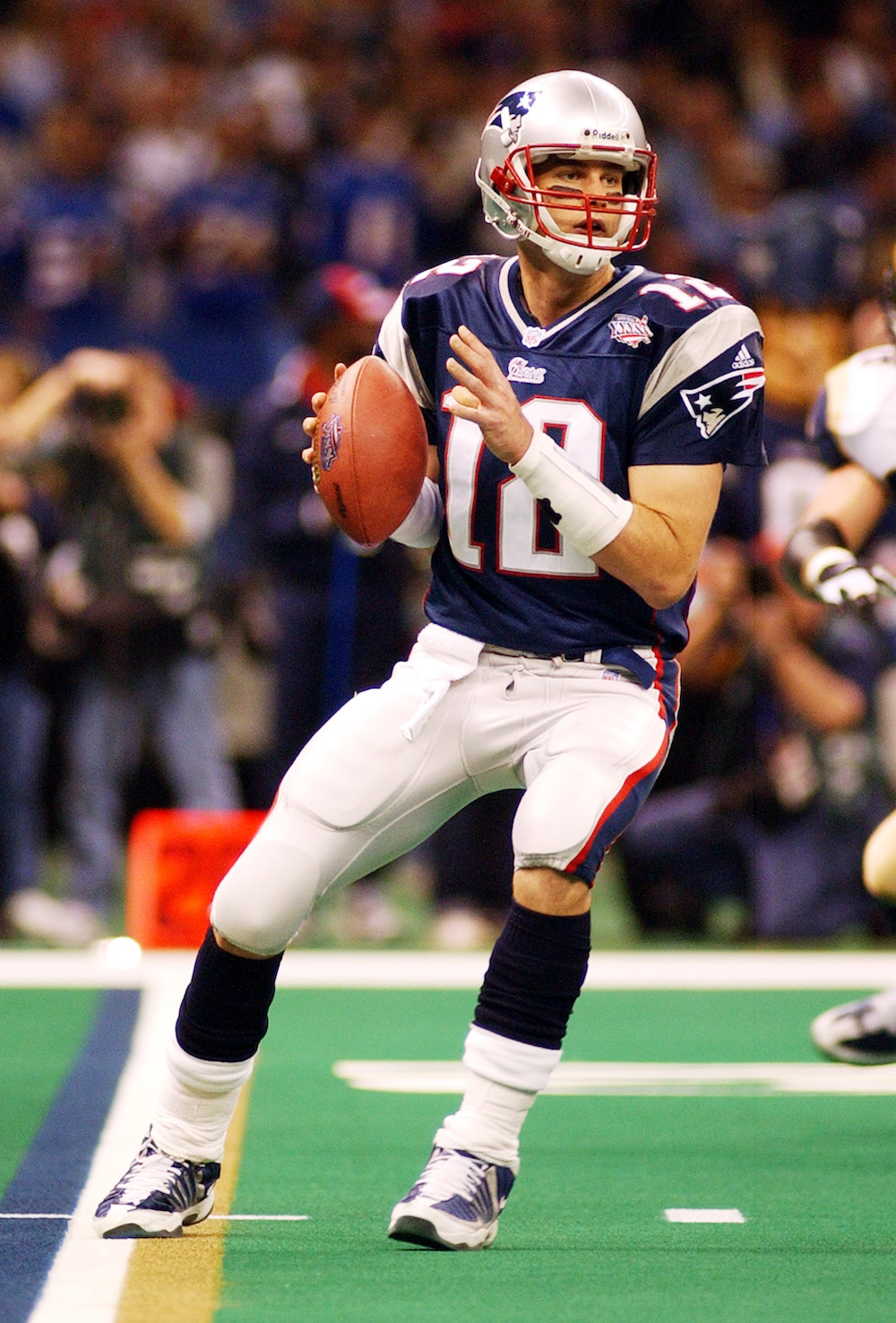 This year’s game was hosted by the FOX Network. Viewers were treated to play-by-pay and commentary by Pat Summeral, John Madden, Pam Oliver, and Ron Pitts.  It had a 40.4 Nielsen Rating, with and estimated 88.8 million viewers watching at home.

For the commercials this year the winners were beer, movies, games and candy. Viewers were treated to the premier of Spider-Man trailer, as well as a commercial for Madden 2002. Budwieser and Bud Light scored high praise for their “Picking a Card” and “Satin Sheets” spots. And M&M presented another hilarious commercial with “Chocolate on Our Pillow or Hotel Check In”.

Going into the Super Bowl, the Rams were a heavy favorite with a point spread of 14 points in their favor. The Patriot’s win is considered one of the biggest upsets in Super Bowl history. The payout for the winning New England Patriots was $63,000  per player, while the Rams received $34,000 per player. 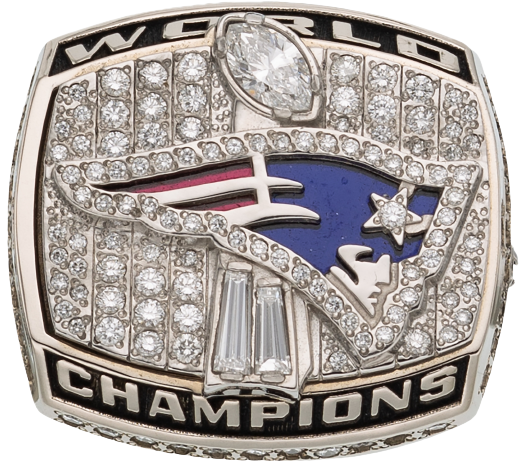 Super Bowl XXXVI was historic for several reasons. It showed patriotism and solidarity in America during one of our darkest periods. It also began one of the most dominant runs of an NFL franchise in the last twenty years.