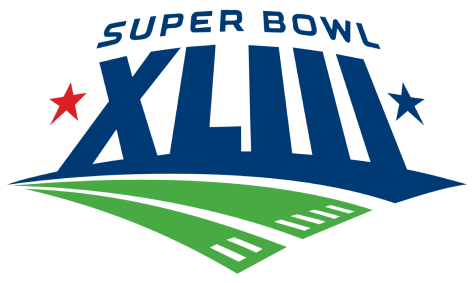 Super Bowl XLIII was played on February 1, 2009, at the Raymond James Stadium in Tampa Bay, Florida, with the Pittsburgh Steelers facing the Arizona Cardinals. The Cardinals sought their first championship since 1947, before the NFL and AFL merged, the longest drought in NFL history. Pittsburgh sought a record-setting 6th NFL title.

This game is ranked highly in most polls for the best Super Bowl of all time.

The Lead-Up to Super Bowl XLIII

Pittsburgh had last appeared in Super Bowl XL where they were victorious. The team began rebuilding following a less than stellar 2006 season with the promotion of defensive coordinator Mike Tomlin to head coach. They finished the 2008 season 12-4.  The team earned their seventh Super Bowl trip, tied for the second-most in NFL history.

The Arizona Cardinals had a long, 50-plus year journey to an NFL Championship. They last made a postseason appearance in 1998. Ken Whisenhunt had left Pittsburgh to take over as head coach of the Cardinals in 2007. Whisenhunt took the team to 8-8 in his first season as head coach.

The following season their 9-7 record was enough to secure them a No. 4 seed in the playoffs. The team went on to earn their first Super Bowl spot since the NFL/AFL merger. Journeyman quarterback Kurt Warner found his home with the Arizona Cardinals in 2005. After losing his starting position to Matt Leinart in 2006, he regained his spot after Leinart went down with injuries.

Ben Roethlisberger finished his fifth season as Steelers quarterback going into Super Bowl XLIII. He threw 3,301 yards for 17 touchdowns with 13 interceptions. His main target was Super Bowl XL MVP Hines Ward, who had 1,043 yards with 81 receptions and 7 touchdowns. Other receivers included Santonio Holmes (55 receptions and 821 yards), Nate Washington (40 receptions and 631 yards), and tight end Heath Miller (48 receptions and 514 yards). The ground game was led by running back Willie Parker, but injuries had slowed him down; back up Mewelde Moore rushed for 588 yards.

The Steelers defense was the best in the league that year. Defensive end Aaron Smith led the defensive line with 60 tackles and 6 sacks. Linebackers LaMarr Woodley (11.5 sacks) and James Harrison (16 sacks) were among the top-ten sackers of the year. In the secondary Troy Polamalu had 7-interceptions making him a constant threat to the offense.

Arizona’s weakness was their inconsistent defense. The defensive line was led by Bertrand Berry who had 5 sacks and 2 forced fumbles and Darnell Dockett. Karlos Dansby had 4 sacks, 2 interceptions, 2 forced fumbles, and 119 tackles.

The Pittsburgh Steelers became the first team to win six Super Bowls after winning XLIII. The game would also have the largest viewing audience in Super Bowl history, with 98.7 million US viewers.

Tomlin also became the youngest coach to win the Super Bowl at 36.

Pre-game entertainment was performed by the band Journey along with the Bethune-Cookman University Marching Wildcats.  Early in the day, Faith Hill sang “America the Beautiful”. Jennifer Hudson sang the national anthem, becoming the second consecutive American Alumni to do the honor.

After winning the coin toss, Arizona deferred their choice to the second half, allowing Pittsburgh to receive. The Steelers took the lead with a 71-yard scoring drive. A 38-yard pass to Hines Ward was followed by a 21-yard run by Heath Miller putting the ball at the Cardinals' 1-yard line. Roethlisberger appeared to score with a scramble, but it was determined he was down before crossing the goal line, and the team chose to play it safe with a field goal to take the lead 3-0.  The Cardinals were forced to punt, and the Steelers ended the quarter with a 25-yard pass to Santonio Holmes.

Following 3 completions, Steelers running back Gary Russell completed a 1-yard touchdown to increase their lead 10-0. Halfway through the second quarter, Warner threw a 45-yard pass to Anquan Bolin. He then fired off a 1-yard touchdown pass to tight end Ben Patrick to close the gap 10-7. Roethlisberger was later intercepted by Karlos Dansby at the Stellers 34. After seven plays the Cardinals were at the Pittsburgh 1-yard line with 18 seconds remaining in the half.

A pass intended for Boldin was intercepted by James Harrison in the end zone. He then ran the ball down the sideline for the longest play in Super Bowl history with his 100-yard run into the opposing end zone, increasing the lead to 17-7 at the half.

The NFL had courted Bruce Springsteen to perform at the Super Bowl for several years, but he had always turned them down. Finally, at Super Bowl XLIII he agreed to perform with his band, the E Street Band. The setlist included “Tenth Avenue Freeze-Out”, “Born to Run”, “Working on a Dream”, and “Glory Days.” Springsteen, who is known for his long performances, cut a verse from each of the songs to allow the performance to stay within the 12-minute timeframe.

After the Cardinals were forced to punt in their opening drive in the second half.  The Steelers had a long scoring drive, aided by 3 personal foul penalties against Arizona, to drive the ball 79 yards. However, they were unable to get in the Cardinals' end zone and had to settle for a field goal and end the quarter 20-7.

After trading punts to start the final quarter, Warner started a Cardinals scoring drive. With 7:33 left to play, Warner threw a fade pass to Larry Fitzgerald who caught the ball in tight coverage from Ike Taylor. This took the game to 20-14. Later, Roethlisberger threw a 20-yard pass to Holmes but was nullified by a holding call on Justin Hartwig in the end zone. The call not only nullified the catch, but gave the Cardinals a safety, and changed the score 20-16.

After the Cardinals took over at the free-kick, Warner threw to Fitzgerald who then made a 64-yard run to the endzone to take the lead 23-20. Pittsburgh took the ball at their own 20 with 2:37 minutes left. What followed was an intense scoring drive with Holmes, Washington, and Moore steadily moving the ball towards the end zone. Holmes then caught a flag route to the right corner of the endzone, managing to keep his toes inbounds before falling out of bounds to take the lead 27-23. With 15 seconds remaining, Warner attempted a Hail Mary pass but was sacked by LaMarr Woodley. Brett Kiesel recovered the ball for Pittsburgh with only 5 seconds remaining in the game and ending the game with the Steelers' sixth Super Bowl victory.

Santonio Holmes was chosen as MVP for Super Bowl XLIII. Holmes was an important playmaker for the Pittsburgh offense, including his game-winning touchdown. 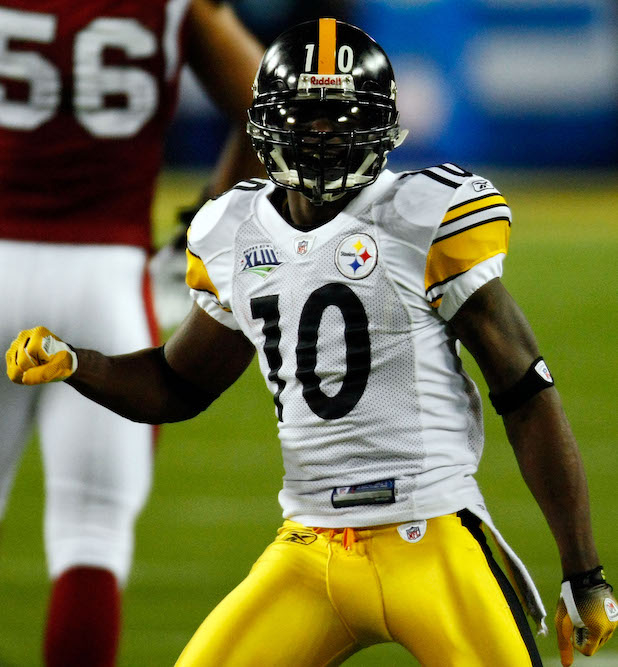 NBC was the host network for Super Bowl XLIII. A record estimated 151.6 million people watched the game and had a Neilson rating of 42. The broadcast team included Al Micheals, John Madden, Andrea Kremer, and Alex Flanagan.

In the Tucson, Arizona area the feed was briefly interrupted by an unknown party right after Fitzgerald’s fourth-quarter touchdown. Ten seconds after the play, the feed was interrupted and 30-seconds of an adult film began playing. Comcast offered $10 credit to those that were affected, and an FBI investigation found the guilty party.

Commercials that year included Miller High Life’s “1-second ad”. Anheuser-Busch and Pepsi ran ads, as usual, that year. Absent were the big three automakers (GM, Ford, and Chrysler) who chose not to run ads that year, possibly due to the 2008 recession which hit the auto industry. The top voted as that year was Doritio’s “Free Doritos” ad.

The Steelers were the favorite going into the game with a 7 spread. The over/under was 48 with the over winning.

The Steelers were each given a $78,000 bonus for winning the game. Even though they came up short, the Arizona Cardinals were awarded $40,000 each. These were similar bonuses as the teams in Super Bowl XLII. 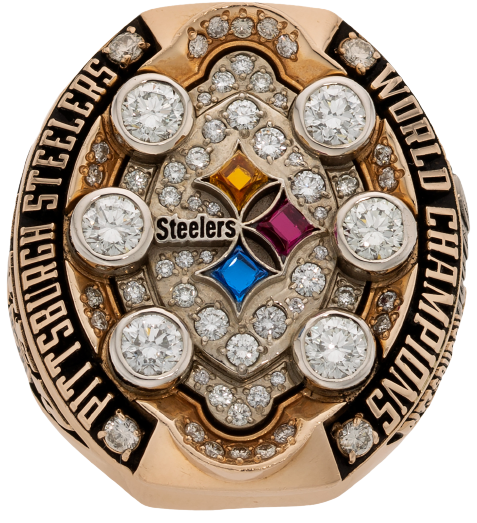 Super Bowl XLIII was one of the most-watched games in NFL history. Both teams played hard to make a close game throughout. Several players had record-breaking plays that year, with Santonio Holmes’ miracle catch in the end zone being one of the highlights of the game.