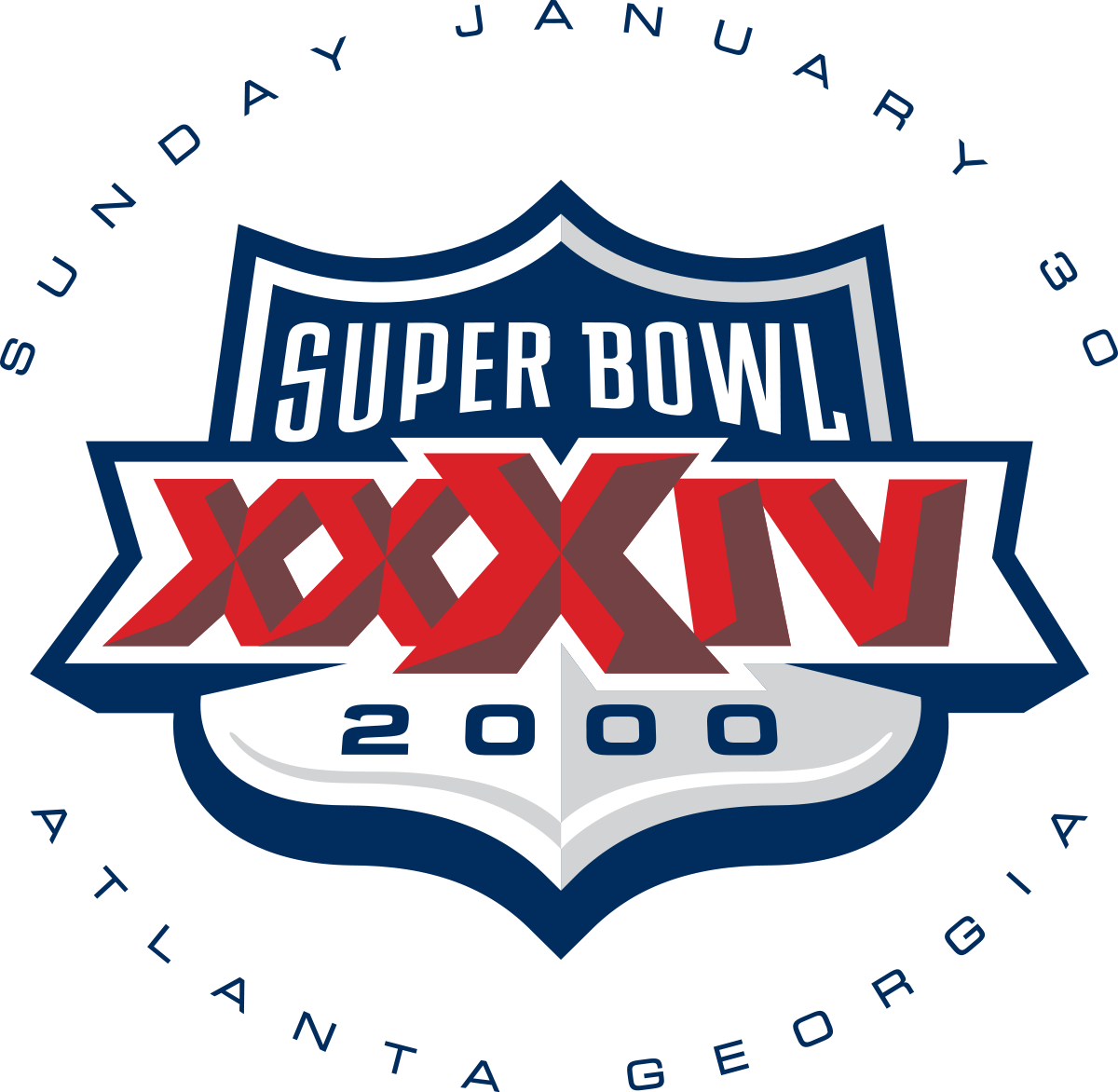 The 80s and 90s delivered a string of Super Bowls starring the same few standout teams (i.e., Redskins, Cowboys, Packers, Broncos and 49ers). But at the turn of the millennium, the spotlight shifted toward two lesser-known teams — the St. Louis Rams and Tennessee Titans — who were both fighting for their first franchise titles. It also marked the last league championship where both teams had yet to win a previous Super Bowl.

January 30, 2000, marked a hard-fought league championship battle, as both the Titans and Rams narrowly crusaded through the playoffs to earn a spot in the matchup. By the time you're done reading this article, you'll know how the final play determined the outcome of the game, what theme the most memorable commercials took on, and why the result left bettors scrambling after wagering on a winner.

The Tennessee Titans became a reestablished NFL team in the mid-1990s, changing their name from the "Houston Oilers" and relocating from Texas to Nashville. However, the 1999-2000 season was anything but smooth-sailing. Titans quarterback Steve McNair missed about a third of the season due to injury but still managed to amass 12 touchdowns, 337 rushing yards, and 2,179 passing yards.

McNair leaned heavily on three-time Pro Bowler and running back Eddie George (1,304 rushing yards and 13 total touchdowns) to catapult the Titans to their unprecedented 13-3 season and No. 4 seed in the conference. On top of its great short and rushing game on offense, Tennessee's defense boasted an impressive assortment of anchors like defensive end Jevon Kearse (14.5 sacks and eight forced fumbles) and linebacker Eddie Robinson (64 tackles).

Interestingly, the Titans defeated the Rams in the regular season and pressed through the playoffs after a lucky wild-card selection.

The St. Louis Rams had widely struggled in the seasons leading up to Super Bowl XXXIV. Despite bringing on head coach Dick Vermeil, credited with overhauling the Eagles for the better, ESPN the Magazine predicted the Rams to be the worst team for the upcoming season. Coaches replaced newly-signed and recently-injured quarterback Trent Green with rookie Kurt Warner, which proved to be a risky decision that paid off immensely.

Warner accumulated a 109.2 passer rating, 4,353 yards, and 41 touchdowns in what's perceived as the best season ever by an NFL quarterback. Helping the Rams to outscore opponents 526-242 and lead the NFL in yardage (6,639 yards) were the likes of running back Marshall Faulk (2,429 total yards) and receiver Isaac Bruce (1,165 yards).

Meanwhile, the defensive line was anything but amateur. The Rams sacrificed only 242 points all season and allowed a mere 1,189 rushing yards — the lowest in the league. Defensive end Kevin Carter (17 sacks) and Todd Lyght (six interceptions) practically ensured the team's conference-best 13-3 record.

Atlanta, Georgia wasn't a city known for brutal, icy winters, but Americans believed the exact opposite after Super Bowl XXXIV rolled around. The city was hit with back-to-back ice storms that left many wondering whether the game would go on. It did, yet the unexpected weather kept Atlanta from hosting the Super Bowl again until Super Bowl LIII in 2019.

On January 30, 2000, 72,605 loyal football fans filed into the Georgia Dome in Atlanta — marking the first-ever Super Bowl match-up since the turn of the millennium. It cost fans a whopping $325 (valued at $491.44 today) for a ticket to watch the Rams and Titans go head-to-head in a battle for their first Super Bowl victories.

The 34th Super Bowl began with pre-game festivities dedicated to "The Great American Music of the 20th Century," highlighting the best rock, big band, and country tunes of the era. Country star Travis Tritt and "the Queen of Rock 'n' Roll" Tina Turner both performed before "This Kiss" musician Faith Hill took the stage for the Star-Spangled Banner. The game began after a coin toss ceremony (tails) featuring NFL studs like Paul Krause, Bud Grant, and Lamar Hunt.

Super Bowl XXXIV got off to a rough, yet slow, start. Both teams struggled to overcome the other's sturdy defensive line, and one missed field goal per squad left fans wondering when quarterback Kurt Warner would bring the intensity. The answer would be "the second half." Although the Rams advanced 294 yards in the first half, they had to settle for three consecutive field goals by kicker Jeff Wilkins: 27, 29, and 28 yards, respectively. The Rams led by a narrow 9-0 margin going into halftime.

Super Bowl XXXIV returned a trend to the halftime show that many loyal NFL fans were hoping to do away with — a Disney theme — while also putting together one of the most-forgotten Super Bowl halftime shows in history. The show began with orchestra music before pop sensations Enrique Iglesias and Christina Aguilera appeared on a tiny stage at the 50-yard line.

The duo performed a lip-synced version of "Celebrate the Future Hand in Hand" before a narrator overhead introduced the turn of the millennium. A group of drummers, dancers, and choirs performed in true parade-style before the narrator introduced Phil Collins, singing Tarzan's "Two Worlds" — clearly keeping with the Disney theme — with a steady drumbeat in the background.

After Collins finished up his performance, Toni Braxton waltzed out on stage to close out the Super Bowl XXXIV halftime show. Braxton belted "We Go On" as Aquilera and Iglesias joined her on-stage in front of the backdrop of an impressive fireworks display. With that, Disney redeemed its once poor reputation for halftime shows (i.e., New Kids on the Block singing Disney tunes alongside Roger Rabbit), though it gained little media attention.

The offensive lines on both teams kicked it into full-throttle early in the second half. Warner fired off two successful passes — a 31-yarder to Bruce and a 16-yard shot to Cornwell — and aced the game's first touchdown on a 9-yard pass to Torry Holt. McNair and the Titans retaliated with a series of rushes by George and passes to tight end Frank Wycheck.

With 13 seconds remaining in the third quarter, George rushed two years into the end zone to give the Titans their first six points of the game (the two-point conversion failed). The St. Louis Rams led 16-6 with just one period remaining.

A forced Rams punt gave the Titans an early head-start in the final quarter of Super Bowl XXXIV, marching 79 yards down the field before George — again — clinched a short touchdown run. But the Titans didn't show any sign of slowing down. Tennessee kicker Del Greco drove the ball directly through the uprights on a 43-yard field goal to tie up the game 16-16. The Rams responded with the passion needed to overcome the Titans and win the game.

Kurt Warner tossed a pass to Bruce, who bolted 73 yards down-field for a touchdown. Trailing 23-16 with fewer than two minutes remaining in Super Bowl XXXIV, the Titans struggled on their trek for one final scoring conversion. With no timeouts remaining, Tennessee had just six seconds to snap the ball and make their comeback — they couldn't.

McNair tossed a clean pass to Dyson, who made a mad dash for the end zone. But the trick decoy play didn't go as planned, as Jones quickly realized what was happening and tackled Dyson not two yards away from the end zone. With the play affectionately known as "The Tackle," the Rams won Super Bowl XXXIV 23-16 and walked away with a neat $58,000 bonus for winning (Titans players earned $33,000).

Rams quarterback Kurt Warner ended the 1999-2000 regular season with the league MVP title. And with an unforgettable Super Bowl performance that led the Rams to their first franchise championship. 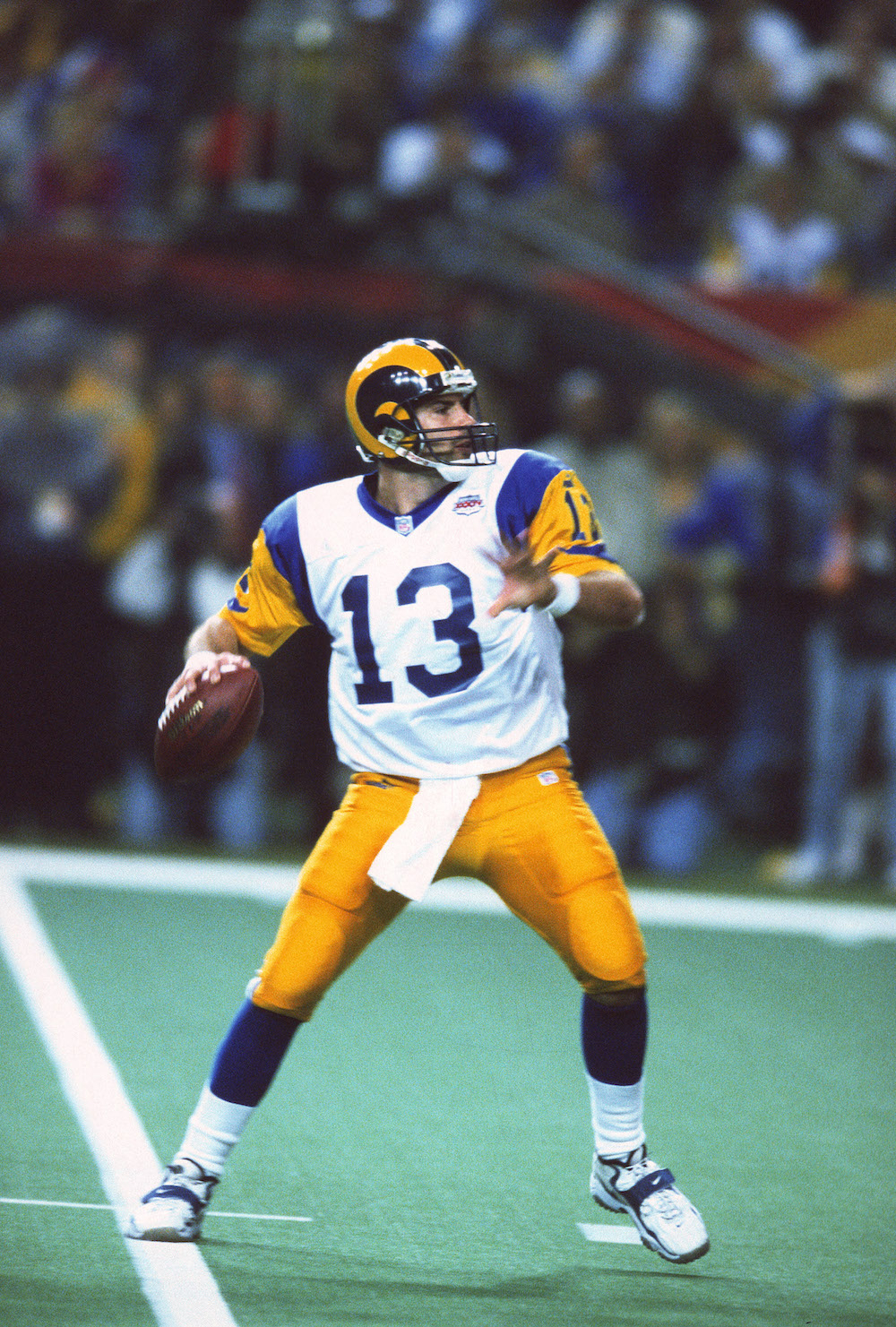 Warner helped the Rams avoid predictions that they'd be the worst team in the league during the season while also earning the highly-lauded MVP honor during his first year as a starter.

Above, you’ll find a picture of Super Bowl XXXIV MVP Kurt Warner next to his team’s trophy.

As the NFL hosted yet another successful regular season, Super Bowl viewership continued on its latest upward trend. Over 130.74 million Americans switched over to ABC at some point throughout the night, earning the broadcast a modest 43.3 Nielsen rating. Viewers at home not only enjoyed play-by-play coverage led by Chris Berman, Boomer Esiason, and Al Michaels but also caught a glimpse of the first-ever Super Bowl to air in 5.1 Dolby Digital (high definition).

And in true turn-of-the-millennium style, most of the Super Bowl commercials had one steady theme: The internet. Web companies like Monster, E*Trade, HotJobs, WebMD, and Britannica spent nearly $2 million on 30-second slots. Perhaps, the most memorable of the bunch was an E*Trade commercial featuring a dancing chimp and the quote, "Well, we just wasted 2 million bucks" — a reference to the exorbitant advertising fees at Super Bowl XXXIV.

The fact that both the Tennessee Titans and the St. Louis Rams qualified for Super Bowl XXXIV was surprising. Commentators anticipated St. Louis to earn the title of "the worst team in the NFL," and an unexpected injury forced the team to settle for an undrafted quarterback in Kurt Warner. Meanwhile, the Titans wouldn't have even qualified had they not received a wild-card, and never before had the Titans (formerly the Oilers) advanced this far into the postseason.

The Rams were the predicted favorites in the match-up but not by much: A 7-point spread. And just like Super Bowl XXXII, the 34th league championship ended in a push — bettors didn’t win or lose by betting on the winner. The 23-16 Rams victory also kept the 45-point over/under bet within the "under." 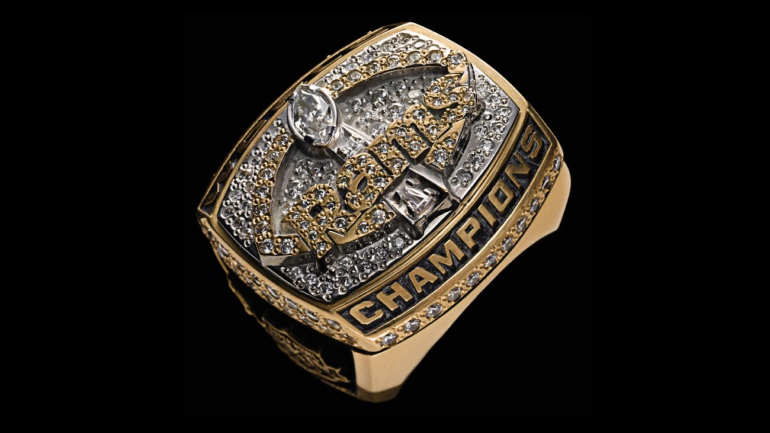 Kurt Warner's star-studded performance during the regular and postseason created a storybook-ending for the once-struggling St. Louis Rams. The Rams walked off with their first-ever league championship as a franchise and with the oldest Super Bowl-winning coach in NFL History (Dick Vermeil, aged 63). Additionally, neither team on the turf gave up a turnover at any point during the game — the last time this has happened.