By Super Bowl XVI, most teams winding up on the big stage had something in common: Past appearances. Super Bowl XVI was the first time in 13 years that both teams vying for the championship title were newcomers to the Super Bowl. The San Francisco 49ers (NFC) and the Cincinnati Bengals (AFC) somehow managed to snag the No. 1 seed in their respective divisions and qualify for Super Bowl XVI.

January 24, 1982, marked the first time the Super Bowl's host city boasted a "cold-weather" classification and a fairly even match-up between the Bengals and 49ers. By the time you're done reading this article, you'll know how Super Bowl XVI helped put future Hall of Famer Joe Montana on the map, which former stars aided in game-day coverage, and which of these teams claimed their first-ever Super Bowl victory.

The Lead-Up to Super Bowl XVI

The Cincinnati Bengals (12-4) were not expected to qualify for Super Bowl XVI after posting a poor 6-10 record the season before and failing to claim a victory in any playoff game in the franchise's history. Calling Cincinnati's shots was a league MVP and top-rated passer — quarterback Ken Anderson — who ended the 1981-82 season with 62.6% of passes completed, 29 touchdowns, and an impressive 320 rushing yards.

Also helping to keep the Bengals on the board were standouts like Cris Collinsworth (1,009 yards and 67 passes), fullback Pete Johnson (1,077 yards and the team's top rusher), and punter Pat McInally (averaging 45.4 yards per punt).

The San Francisco 49ers (13-3) approached the 1981-82 NFL season with little to show for — the previous two seasons ended with miserable 6-10 and 2-14 records. But the new Super Bowl contenders had a secret weapon on their starting line-up: Rookie quarterback Joe Montana. Montana completed a remarkable 63.7% of passes, threw for 19 touchdowns, and helped San Francisco advance 3,565 yards in just his third NFL season.

Montana's leadership in San Francisco helped bring out the talent in stars like wide receiver Dwight Clark (1,104 yards and 85 interceptions), running back Earl Cooper (330 rushing yards), and running back Ricky Patton (543 rushing yards). But it was the brute force on the defensive line that likely made the 49ers the favorites in Super Bowl XVI, led by three rookies amassing a whopping 14 interceptions during the regular season.

The Bengals and 49ers met during regular-season play, with San Francisco decimating them. And although the Bengals had a veteran quarterback with 11 years in the NFL and the 49ers' quarterback was in his third season, neither team was a "shoo-in" to win Super Bowl XVI. There was also concern about whether Joe Montana would even show up on time for the big game after the bus he was on got caught in the traffic jam caused by George H.W. Bush's motorcade.

On January 24, 1982, over 81,270 football fanatics poured into the Pontiac Silverdome up in chilly Pontiac, Michigan, with the temperature-controlled dome keeping fans warm (72 degrees) and sheltered from this normally “cold-weather city.” Fans paid an average of $40 for a ticket (worth about $107.89 in today's money) to catch a glimpse of history in the making.

Super Bowl XVI festivities began with a moment of silence for "Solidarity" — a Polish trade union struggling against the communist government — and a national anthem rendition by Motown legend Diana Ross. After a non-televised Canadian National Anthem performance by the University of Michigan Band (the second time in Super Bowl history) and a coin toss hosted by former Steelers' standout Bobby Lane, a "tails" ruling kicked off the big game.

Super Bowl XVI started slow — not surprising, given the near-equal level of talent between the two sides. 49ers running back Amos Lawrence fumbled the ball on the opening kick — the first time this had happened in Super Bowl history — and the Bengals promptly lost possession after Anderson tossed an interception. Montana advanced the 49ers’ field position 68 yards over 11 plays, running the ball into the end zone himself on a 1-yard play to give the 49ers a 7-0 lead.

The Bengals nearly found themselves on the scoreboard early in the second quarter, but Collinsworth fumbled the ball after a rough tackle by defensive back Eric Wright. The 49ers handily recovered the fumble and darted a record 92 yards, leading to a booming 10-yard touchdown pass to fullback Earl Cooper — widening the 49ers lead to 14-0.

49ers kicker Ray Wersching kicked off after the touchdown with an unusual squib kick, forcing the Bengals to begin their next drive at the 2-yard-line and punt with just four minutes left in the half. Montana — after successful passes to Clark, Patton, and Solomon — led the 49ers into field goal territory, with Wersching nailing a 22-yard field goal.

After another squib kick by Wersching and with seconds remaining in the half, the 49ers quickly regained possession, and Wersching aced a 26-yard field goal. The first half of Super Bowl XVI ended with the Bengals trailing 20-0.

As the teams returned to the locker room, the 49ers looking to maintain their substantial lead and the Bengals anxious for a comeback, the halftime show got started. Up with People — a non-profit organization with several previous Super Bowl performances — took to the field in the Pontiac Silverdome to wow fans with a performance of "Salute to the 1960s and Motown."

The third quarter of Super Bowl XVI was Cincinnati's last chance to get on the board and save the game. Bengals quarterback Ken Anderson delivered a 19-yard pass to Steve Kreider to advance toward a scoring opportunity, rushing five yards into the end zone himself to decrease San Francisco's lead to 20-7. The 49ers then forced the Bengals to botch another touchdown opportunity with a defense-heavy play spearheaded by linebacker Dan Bunz.

The Bengals regained possession shortly after the final quarter began, pressing 53 yards down the field until Anderson connected on a 4-yard pass to Ross. Desperate to keep their lofty lead, the 49ers chopped nearly five minutes off the clock and secured another 40-yard field goal from Wersching to again widen their lead 23-14. After Anderson threw an interception and the Bengals fumbled the ball, Wersching nabbed a record fourth field goal from the 6-yard-line.

The Bengals pressed on, dashing down the field once more to secure their third and final touchdown of the season — a 3-yard lob to Ross. The clock in Super Bowl XVI ran down, and the 49ers successfully held onto their 26-21 lead to earn their first Super Bowl victory. 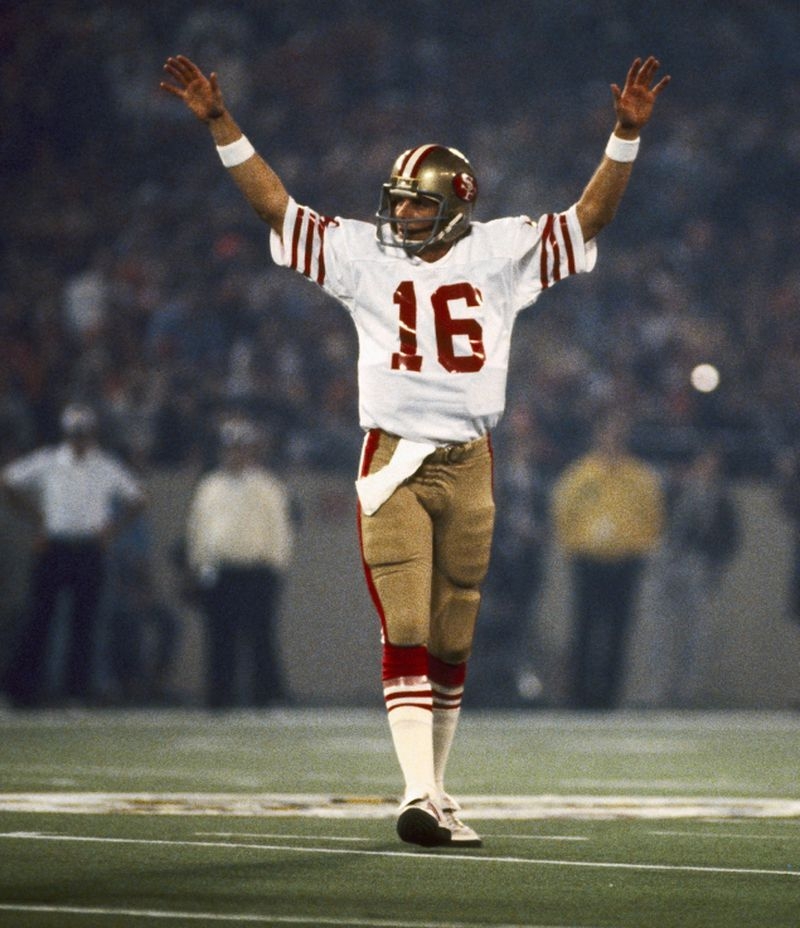 Montana's near-perfect Super Bowl XVI performance proved the rookie could hold his own on the gridiron alongside the veterans.

Super Bowl XVI attracted one of the largest nationwide audiences in Super Bowl history. Over 110.23 million Americans tuned in to catch the CBS broadcast, securing a record 49.1 Nielsen rating — a record that no other Super Bowl has been able to break since and only trails the M*A*S*H finale event in 1983.

The teams on the field may not have been the stereotypical favorites to qualify for the league championship. Still, the high-profile crew in the announcer's box undoubtedly captivated the viewers at home. NFL stars like John Madden (Raiders coach), Terry Bradshaw (Steelers quarterback), and Roger Staubach (Cowboys quarterback) led the studio analysis.

Despite San Francisco bouncing back from a dismal 6-10 record in the season prior and a standout rookie quarterback like Joe Montana at the helm, both teams on the field held relatively equal chances of winning. The 49ers and the Bengals each displayed incredible ball security and handily earned #1 seeds in their divisions during the 1981-82 season. 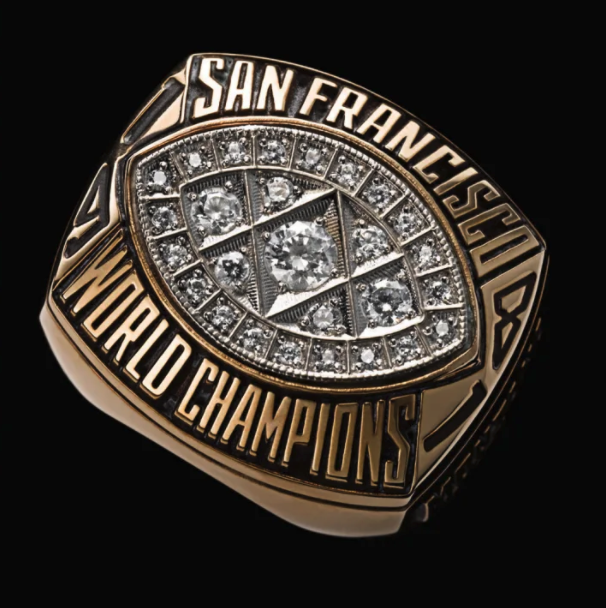 The 49ers approached Super Bowl XVI as favorites, but by a slim margin. San Francisco covered the 1-point spread defeating the Bengals 26-21. Impressively, the over/under of 48 was about as on-point as possible. With a total of 47 points scored in Super Bowl XVI, betting on "under" was risky but it paid off.

Super Bowl XVI went into the record books as one of the most-watched Super Bowls, partially because it was the most even match-up. Despite the exciting game and ground-breaking seasons for both teams, neither would return for a consecutive Super Bowl appearance like so many other teams before them.