In the 74 years since the Golden State Warriors were established, they’ve collected an impressive number of unrivaled accomplishments. The Warriors have amassed 6 NBA Championships, 7 division titles, and 11 conference titles in the last 7 decades. Now, the team’s predicted financial value sits at a cool $4.3 billion.

By 1956, the team’s success remained steady with another league championship over the Fort Wayne Pistons. When Wilt Chamberlain signed with the Warriors in 1959, they took another gigantic leap. Chamberlain, a league leader in both scoring and rebounding, led the team with an astonishing 50 points per game during just his third year in the league. This continued into the early 1960s when the team moved to San Francisco after being purchased by TV producer Franklin Mieuli.

When the Warriors lost Chamberlain in 1965, the team’s unrivaled success took a sudden downturn, resulting in a 17 win season. That was quite surprising considering the team was coming off of an NBA Finals appearance during the previous season. This later changed when the Warriors drafted players like Rick Barry and Nate Thurmond, who helped to lead the team to the 1967 Finals against the new Philadelphia 76ers.

The Warriors went through yet another period of struggle thanks to some bad trade and poor performance on the court. The 1985 season meant the addition of future Hall of Famer Chris Mullin and upheaval of the current coaching staff. Despite these changes, the team wouldn’t see another title for quite some time.

If there’s one truth about the Golden State Warriors, it’s that they have gone through a lot of logos since their early years in Philadelphia.

After the move to San Francisco in 1962, the logo was completely overhauled. This new logo consisted of a solid gold circle with a blue Native American headdress inside. Another circle surrounded this with the name “San Francisco Warriors” added with the “I” being represented by an arrowhead, with that logo being surrounded by yet another gold circle.

The 1970 and 1971 seasons brought a logo that infused a landmark in the area: The Bay Bridge. This logo had a solid yellow circle with a blue outline of the bridge surrounded by a blue outline. The name “The City” was written above the circle.

From 1972 to 1975, the bridge in the logo was done away with, the yellow circle turned gold, and a blue outline of the State of California was inside of the circle. The name “Golden State Warriors” was written on the exterior of the circle.

Between 1976 and 1988, the gold circle turned into a yellow basketball.

The 1989 season called for a return of the gold coloring and utilized a much larger font.

The logo used between 1998 and 2010 was completely new to the franchise. This logo took on more of a superhero theme, with a muscular character holding a lightning bolt attached to the “W” in “Warriors.” The blue superhero stood in front of an orange basketball.

The logo used between the 2011 and 2019 seasons meant a return of the Bay Bridge. This logo had a blue circle with a yellow outline of the bridge. “Golden State Warriors” was printed around the exterior of the circle in blue.

The brand new logo released for the 2020 season simply uses a darker blue and thicker yellow lines on the bridge. 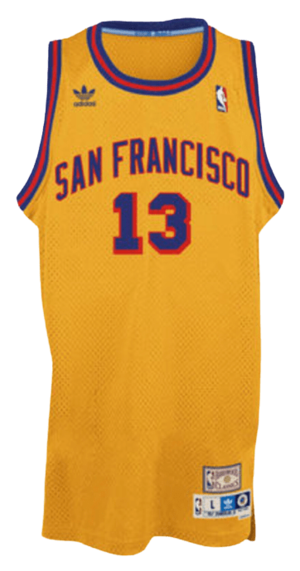 The first jersey worn between 1962 and 1964 was mostly yellow with “San Francisco” written in blue font and red outlines. 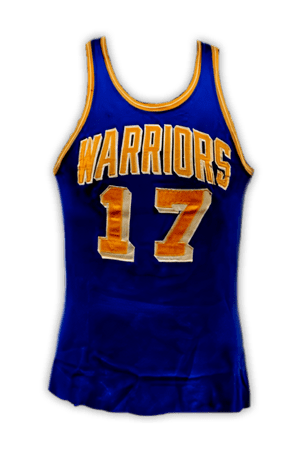 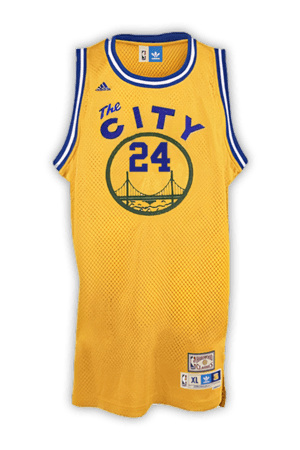 From 1966 to 1971, the Warriors returned to a yellow jersey. It infused the logo at the time that boasted the Bay Bridge and had “The City” written in blue above the logo. 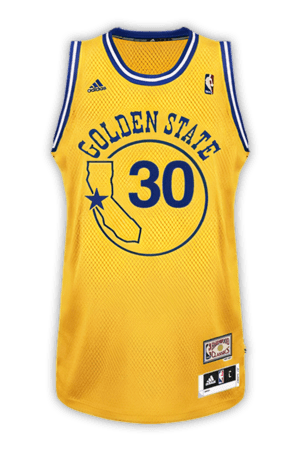 From 1972 to 1975, the bridge in the logo was scrapped, the yellow circle turned gold, and a blue outline of the State of California was inside of the circle. The name “Golden State Warriors” was written on the exterior of the circle. 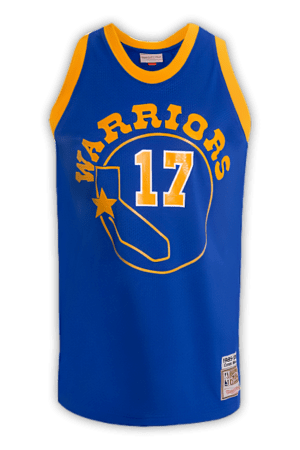 In 1975, a blue jersey was released. The name “Warriors” could be seen in yellow font right above a yellow version of the previous logo. 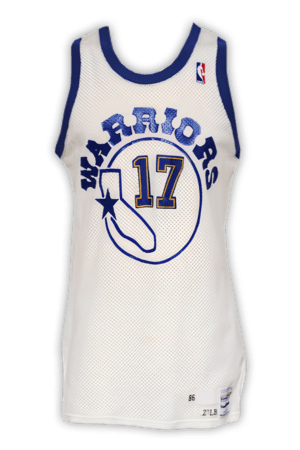 From 1984 to 1989, the Warriors transitioned over to a white jersey. This jersey used the same design as the previous, just replacing the yellow coloring with dark blue. 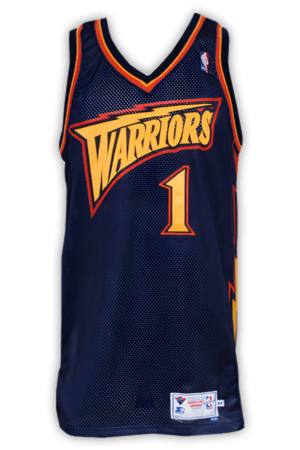 The 1989 jersey saw the introduction of a superhero-like design. The dark blue jersey had “Warriors” written in yellow letters with the “W” having a lightning bolt extending across the top. 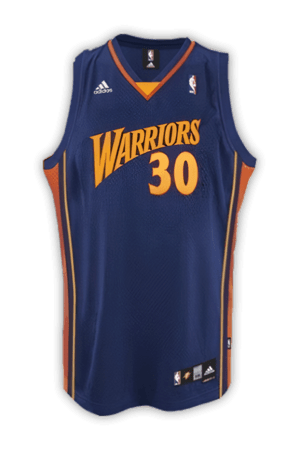 From 2002 to 2010, the Warriors wore a modified version of the previous jersey. This one was mostly blue with “Warriors” written without the lightning bolt. 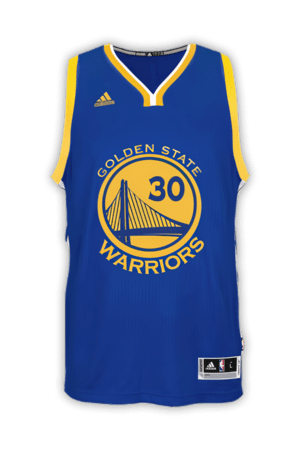 Since 2010, the Warriors have sported a mostly blue jersey with a yellow version of the Bay Bridge logo. “Golden State Warriors” is scrawled on the jersey and the player number can be seen in blue inside the logo. 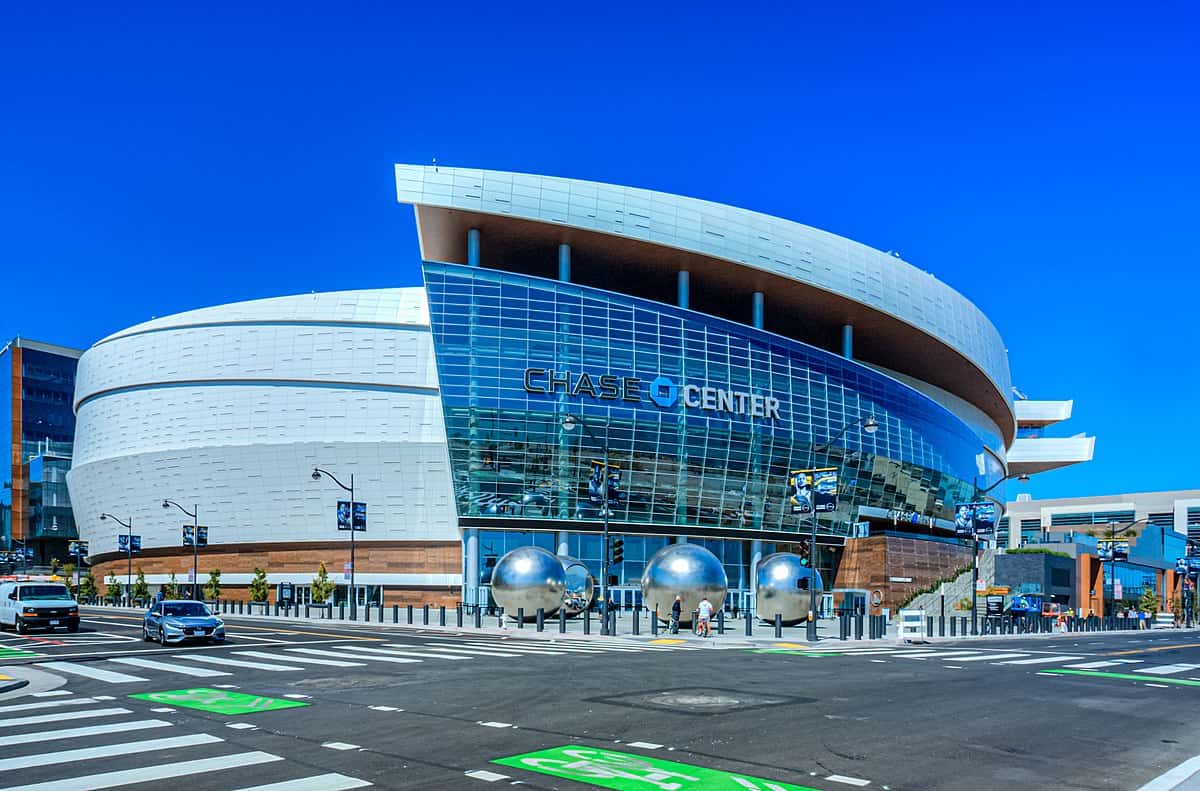 The Golden State Warriors have played in 9 different arenas since their early years back in Philadelphia. They split time between the Philadelphia Arena and the Philadelphia Convention Hall until they left for California in 1962. The Warriors played at the Cow Palace, San Francisco Civic Auditorium, and USF War Memorial Gymnasium between 1962 and 1966. They also hit the court at the San Diego Sports Arena (1971-1972), the San Jose Arena (1996-1997), and the Coliseum Arena. The Golden State Warriors have called the Chase Center home since 2019

California-based teams always seem to get a large celebrity following, and the Warriors are no different. The team’s fan base also includes stars like George Lucas, Jessica Alba, Carlos Santana, and Manny Pacquiao.

Despite a team history dating back nearly three-quarters of a century, there’s something worth pointing out about the Warriors: The team has retired a mere 6 numbers worn by former players. That averages out to about one retired number every 12 years. As expected, the list is impressive.

Even more significant is the fact that the Golden State Warriors currently have 19 former players that have been inducted into the coveted Basketball Hall of Fame. That includes 6-year Warriors veteran Wilt Chamberlain, averaging 41.5 points and 25.1 rebounds per game when with the team, amassing 17,783 points for the Warriors. The list also includes the likes of Chris Mullin, a 5-time All-Star who played 13 seasons for the squad.

The 2007 season brought the Warriors to the playoffs for the first time in 12 years. With the addition of Stephen Curry in 2009 and Kevin Durant a few years later in 2016, the once-struggling Warriors quickly changed course. The team qualified for the NBA Finals over 5 consecutive seasons from 2015 to 2019. The Warriors faced the Cleveland Cavaliers during the first 4 appearances, claiming victories in 2015, 2017, and 2018. It remains one of the most dominant stretches in league history.