The Miami Heat have only been in the NBA for 32 years and got their start back in the 1988 to 1989 season. So how did a team with a mere 15 wins in its inaugural season change course and capture 61 victories just a few years later? To understand how that could even be possible, you need to take a look back at the history of one of the greatest teams in NBA history.

In 1987, there was a huge push across the country to expand the NBA and add additional franchises. A former NBA player by the name of Billy Cunningham alongside Lewis Schaffel and the owner of Carnival Cruise Lines were on a quest to bring one of these franchises to Miami, Florida. Despite competition from another potential team down in Orlando, the Miami Heat were formally approved for the season beginning in 1988 (Orlando would begin a year later).

The name was chosen via a naming contest like most NBA teams, though the winning name, “Miami Vice,” was bypassed because it was the name of a television show. The first year as a team was filled with struggle, as the team was loaded with mostly novice players and a few veterans like Pat Cummings and Dwayne Washington. The inaugural season was accompanied by a lot of time on the road, as the Heat were somehow in the Western Conference.

The Miami Heat began a trend in its first few years that would keep the team from advancing to the playoffs until 1996: Drafting players straight out of college. It seemed that both college players and veteran players struggled to adapt to the playing style of the newly-formed Miami Heat. That was until there was a complete shift in the roster in 1994, followed by Schaffel and Cunningham selling their shares of the team.

The addition of Micky Arison (the son of the Carnival Cruise Lines owner) as an owner of the Miami Heat brought Pat Riley as the president and coach of the Miami Heat in 1995. The team roster was nearly emptied with the trading away of 10 players for the addition of 3. This brought the Miami Heat down to a mere eight players (later nine) in a game against the Chicago Bulls, which the Heat somehow won.

Over the next few years, the Miami Heat added the likes of Alonzo Mourning, Tim Hardaway, and Shaquille O’Neal to the roster. This led the team to a franchise first: A division title in 1997. The team once again saw good trade deals with the drafting of players like Dwyane Wade and Lamar Odom. After 18 years as an official NBA team, the Miami Heat eventually won the NBA finals in 6 games against the Mavericks.

The Miami Heat have actually only used 2 logos since the team was first created back in 1988. The second logo used by the Heat is simply a modification and an upgrade of the first.

The first Miami Heat logo was used between 1989 and 1999. This logo showed an orange basketball with a trail of flames going through a black basketball hoop. The name “Miami Heat” was written in black at the bottom and the “T” in “Heat” had a flame on the right side.

Since 2000, the Miami Heat have used this upgrade version of the original logo. This logo changed the basketball to more of a brown color and the hoop was made white instead of black. The flames on the tail end are bright orange. 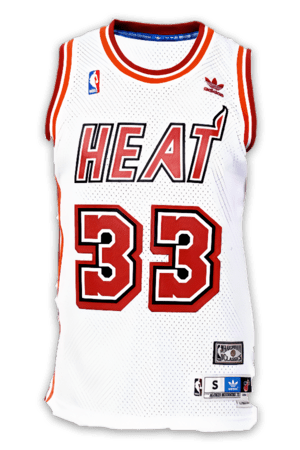 From 1988 to 1999, Miami Heat players sported a mostly white jersey with red lettering spelling “Heat.” The letters and numbers had a white border surrounded by another black border. 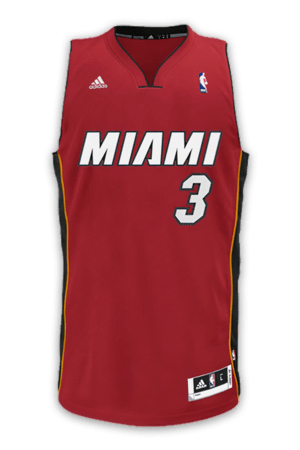 Since 2001, the Miami Heat have used a dark red jersey. The name “Miami” is written on the front in white letters and is outlined in black. There also appears to be a black vertical stripe down the sides of the jersey. 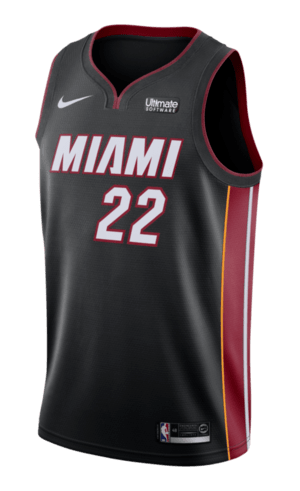 The current Heat get-up uses the same Miami lettering, but they’ve adopted a black and white color scheme, rather than dark red. 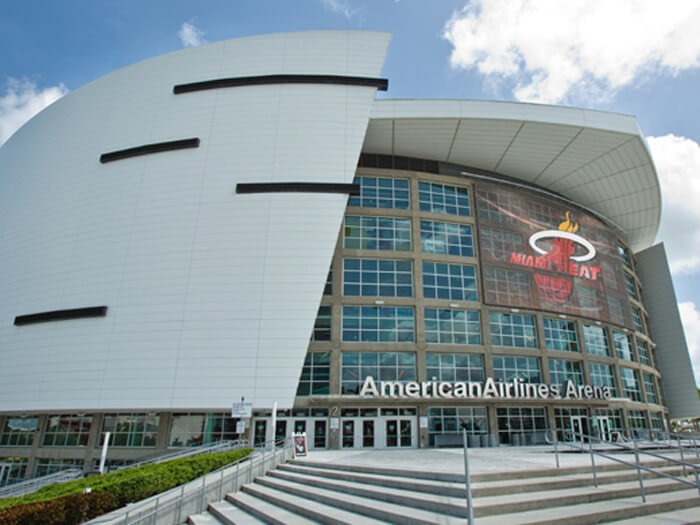 Each new logo and jersey for the Miami Heat was also paired with a brand new home arena to play in. The Heat played at the Miami Arena between 1988 and 1999. They then moved to the American Airlines Arena in early 2000, an arena they still call home.

The Miami Heat have accumulated a growing celebrity fan base over the years. In recent years, stars like Jimmy Buffett, Serena Williams, Rick Ross, Dwayne "The Rock" Johnson, Floyd Mayweather, and Flo Rida have supported the Heat.

There’s one thing that can be said about the Miami Heat: Some of the greatest players in NBA history were at peak performance while with the team. With that said, the Miami Heat have retired the jerseys and numbers of 5 of these powerhouses, including:

Interestingly enough, the Miami Heat have also retired the number of one player who never slipped on a Miami Heat jersey during his entire NBA career. That player is the great Michael Jordan. The No. 23 was officially retired by the Heat after Jordan concluded his 15-season run in the league.

4 Miami Heat players were so skilled in their craft that they earned the most precious title of all: A spot in the Basketball Hall of Fame. These players include Ray Allen, who spent two years with the team and netted over 10 points per game, as well as 11-year Miami Heat veteran, Alonzo Mourning. Shaquille O’Neal and Gary Payton are also in the Hall of Fame, but you should expect future inductees to include Dwyane Wade, LeBron James, and Chris Bosh. These three players turned the team around in 2011.

In recent years, the Miami Heat have been quite successful thanks to the drafting of Chris Bosh and LeBron James in 2010. Alongside then-Miami Heat superstar Dwyane Wade, the Miami Heat advanced to the NBA Finals during 4 consecutive seasons (2011 to 2014). The Heat clinched back-to-back NBA titles in 2012 against the Thunder and 2013 against the Spurs. During that four-year period, the Heat captured an unexpected .805 record.

Despite the success by the Miami Heat between 2011 and 2014, the team hasn’t advanced to the NBA finals since. That’s partially due to the loss of LeBron James in 2014, Dwyane Wade in 2016, and Chris Bosh in 2017. The Miami Heat have maintained winning records for the last few seasons, giving fans hope that the team from 2011 isn’t a figment of the past.

In team history, the Miami Heat have three NBA Championships, six conference titles, and 14 division titles. The Miami Heat have also created rivalries with several different teams in the league, particularly the Celtics, Mavericks, and Pacers.