When team owners saw that fan attendance was down and the team couldn’t even clinch a spot in the playoffs during the 1972 to 1973 season, the team was eventually put up for lease. It was then that a group of 36 local San Antonio businessmen joined forces and leased the team with the option to buy in three years. The team known as the Chaps would then be known as the San Antonio Gunslingers before eventually becoming the Spurs prior to the first official game.

Owned by Angelo Drossos and Red McCombs, the San Antonio Spurs brought out huge crowds that toppled the records of the former Chaps. The businessmen would go on to buy the team outright and hire coach Bob Bass. Bass was known for implementing a fast-break style of gameplay and would lead the team to a winning record in the 1974 to 1975 ABA season.

The coaching staff would eventually be replaced when the NBA and ABA officially merged in 1976. During the Spurs’ first year in the NBA, the team boasted a winning record and was considered one of the best teams in the league. The Spurs’ entry into the NBA would eventually initiate a rivalry with another Texas team, the Houston Rockets.

The San Antonio Spurs eventually brought on players like George Gervin in the late 70s, who was then considered one of the best scorers in the entire league. With 33+ points a game on average, Gervin would help lead the team to 5 titles in the team’s first seven years in the NBA.

Given the massive number of team names throughout the years, it comes as no surprise that the San Antonio Spurs has had a good amount of logos.

The introduction of the San Antonio Spurs led to the creation of the brand new logo in 1976. This logo is a simple block lettering of the word “Spurs” with a cowboy boot spur designed into the letter “U.”

In 1989, a retro-style logo took the place of the simple Spurs logo. This one had a similar design with the addition of a blue-green, pink, and orange background, which appears to be painted.

The team logo returned to one similar to the 1976 variation in 2003, with an entirely black, grey, and white design.

The current version created in 2017 is very similar to the last but instead uses a white background. 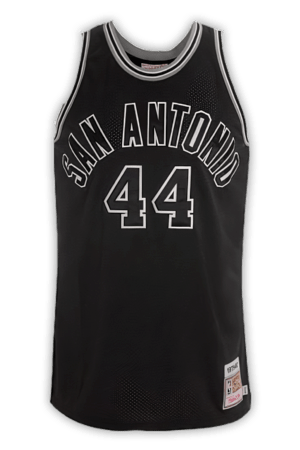 Between 1976 and 1989, the players wore an all black jersey (background, number, and “San Antonio” included) with white bordering and highlights all around. This was the first jersey change since the Chaps moved to San Antonio and became the Spurs. 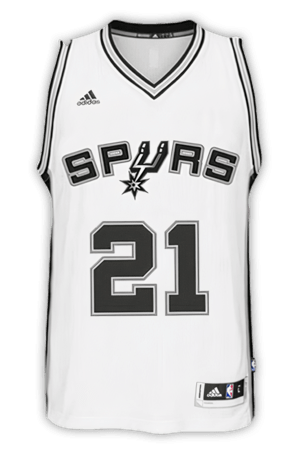 1989 saw a more modern look to the San Antonio Spurs jersey. This one infused the team’s logo on a white jersey with the use of black lettering and grey outlines. 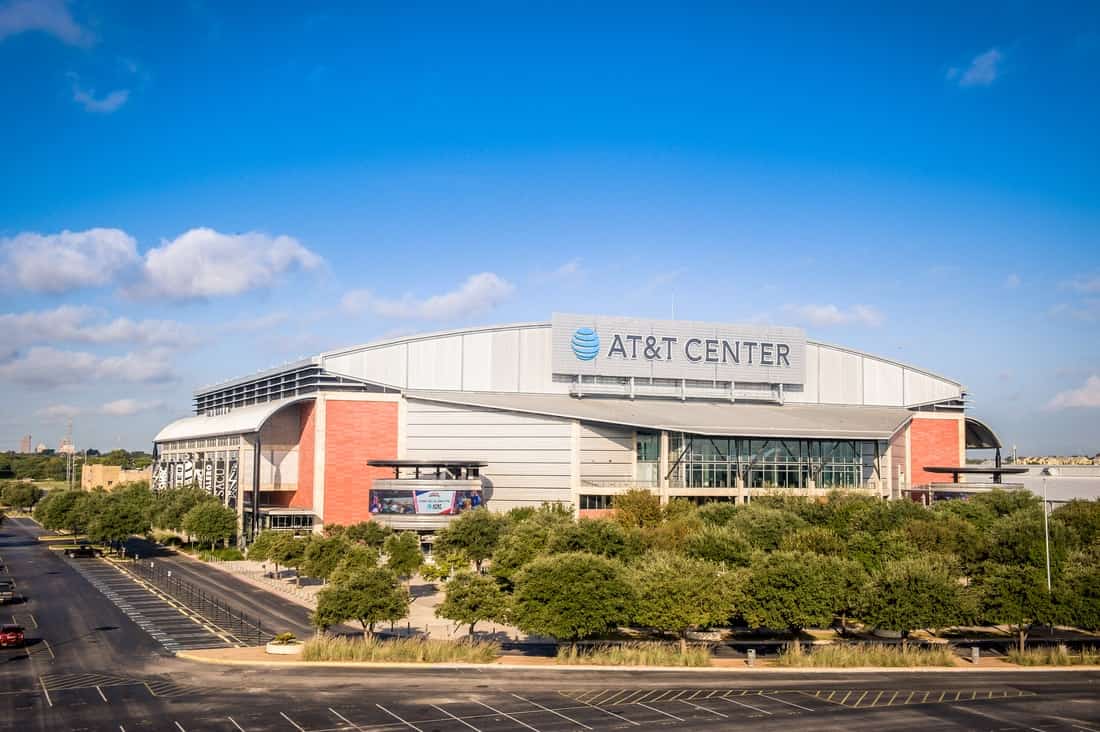 If you ever make it down to a Spurs game in Texas, don’t be surprised if you cross paths with a world-renowned celebrity. Stars like WWE superstar Shawn Michaels, Eva Longoria, and Phil Collins label themselves as Spurs fans and often sit courtside at games.

After the big move to San Antonio in the 1970s, it took the Spurs a few years to really pick up the intensity on the court. The 1980s through the early 2000s brought players that would change the future of the franchise forever. Since making an impact on the team, 10 player numbers have been retired, including:

Despite #12 being retired in honor of Bruce Bowen, the decision was ultimately reversed in 2015 with Bowen’s approval so that LaMarcus Aldridge could sport the number.

In addition to a decent number of retired jerseys, the Spurs also have 9 players in the Basketball Hall of Fame as well as two coaches in franchise history. The Hall of Famers includes 19-year Spurs veteran Tim Duncan, who netted an average of 19 points per game and saw playing time in over 1,400 games with the Spurs. It also includes one of the best defensive players of all time, Dennis Rodman.

Despite a questionable first few years as a team, the San Antonio Spurs eventually became a force to be reckoned with in the NBA. Under the guidance of Coach Gregg Popovich since 1996, the team has taken home five championships, six conference titles, and 22 division titles. Popovich has led the Spurs for the last 24 and has even gone on to coach the Men’s Basketball Team in the Olympic Games.

In the 53 years since the Chaps were first formed, the Spurs have been able to draft some of the best players in NBA history. That includes David Robinson, Tim Duncan (an NBA Finals MVP and a current coach for the San Antonio Spurs) as well as Tony Parker and Manu Ginobili.

The Spurs have struggled since losing their iconic big three.