The Philadelphia 76ers from the late 1960s are considered one of the best NBA teams in history. In fact, the team was able to secure playoff appearances each and every season between 1950 and 1970. Though the team is nowhere near as successful as it was in its beginning years, the history of the team is quite impressive. Now it’s time to learn everything you didn't know about the team known as the Sixers.

The Philadelphia 76ers have one of the most interesting backstories in all of NBA history. In 1946, an immigrant by the name of Danny Biasone spent a mere $5,000 to secure a National Basketball League (NBL) franchise up in Syracuse, New York. The team’s first season was rather successful for a brand new team, boasting a 21-23 record as the Syracuse Nationals.

By the second season, Leo Ferris was added to the roster and Al Cervi played a pivotal role as a player-coach. The team ended the second season in the NBL with a cool 40-23 record. Yet, the team didn’t last in the NBL for long, transitioning over to the newly-formed NBA in 1949. The team’s first season in this new league was an impressive 51-13, but the team ultimately fell to the Lakers 4-2 in the Finals.

During the 1951 and 1952 seasons with the NBA, the Nationals found themselves up against their in-state rivals, the New York Knicks. Despite losing to the Knicks in the division finals over two consecutive seasons, the Nationals advanced to the NBA Finals against the Lakers again. The Nationals lost to the Lakers in a tough game 7, but eventually returned to the Finals during the 1955 season and proved superior to the Fort Wayne Pistons.

After the Nationals won their first NBA title against the Pistons, they suffered through a stream of average playing. The team was then sold to investors by the names of Ike Richman and Irv Kosloff in 1963. The Nationals relocated to Philadelphia and desperately needed a new name to match the move. Based on the history of Philadelphia, the name “76ers” was chosen as a nod to the area being home to the singing of the Declaration of Independence in 1776.

In 1964, the team’s bad luck turned around greatly thanks to the drafting of superstar Wilt Chamberlain. The 1967 season was the most impressive yet, ending with a record of franchise-high 68-13. This brought the Philadelphia 76ers to the NBA Finals once more and allowed the team to clinch its first championship since 1955 against the Warriors.

The 1970s were troublesome for Philadelphia’s new basketball team. The Sixers were unable to see the playoffs in the 1972 season and struggled greatly until the team added players like Charles Barkley and Julius Erving. The 76ers made it to the NBA Finals 4 times between 1977 and 1983, securing their third NBA Championship against the Lakers in just 4 games in 1983.

The 76ers have gone through plenty of logos in the 74 years since the team was first established in Syracuse.

The logo used between 1978 and 1997 moved the previous logo into a mostly white basketball with blue lines and outlines.

The 1998 logo for the 76ers took a sudden turn. This logo removed the American theme and used gold lettering for “76ers,” a single grey star in the background, and a swooshing gold basketball off to the right.

The 2010 to 2014 logo was more of a throwback to the team logo last used in 1997. The previous logo was placed in a red square with the name “Philadelphia” written underneath in a blue rectangle in white font. The entire layout was outlined in grey.

The new logo in 2015 took the same basketball from previous years and surrounded it with a blue circle. The blue circle has six white stars at the bottom half and the name “Philadelphia” angled around the top half. 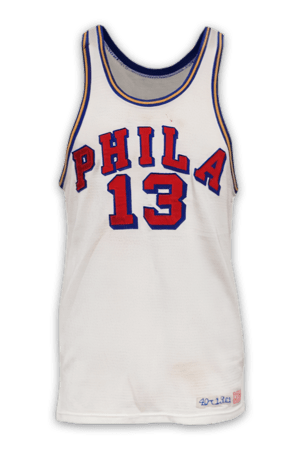 Between 1966 and 1970, the newly-formed Philadelphia 76ers wore a mostly white jersey with the city name written in shorthand (Phila) using red lettering. 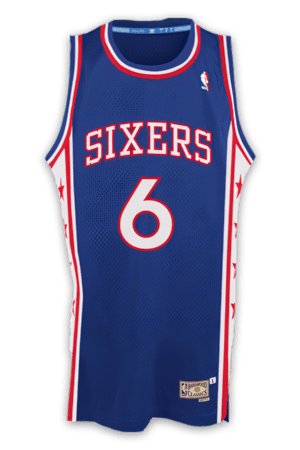 In 1976, the 76ers adopted a mostly blue jersey. The jersey used the name “Sixers” on the front in white lettering with a red border and had a thick white stripe down each side with red stars. 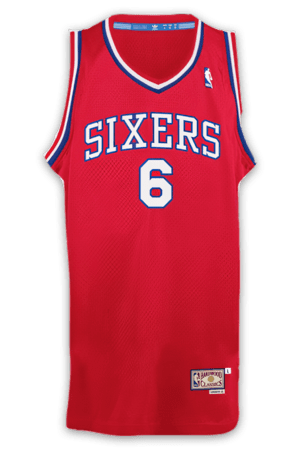 The jersey worn between 1978 and 1991 was very similar to the previous jersey worn. Instead, this jersey was red, letters were outlined in blue, and there were no stripes down the side. 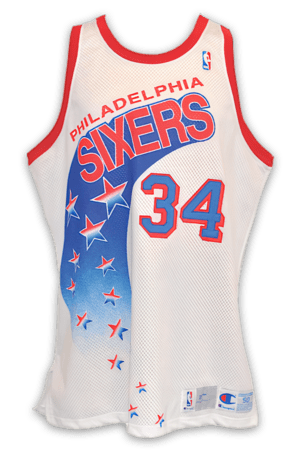 In an interesting turn, the 1991 jersey was the most American themed yet. It had a mostly white design with 13 stars falling under the name “Philadelphia Sixers.” 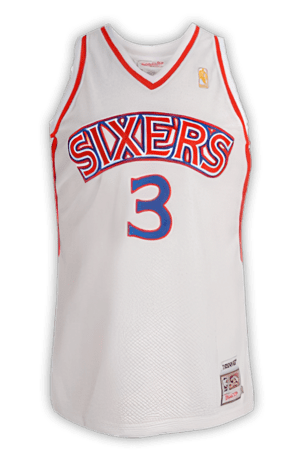 The 1994 jersey was a bit tamer. It was mostly white with red lettering for “Sixers” and a blue border. The coloring of the number was the opposite of the letters. 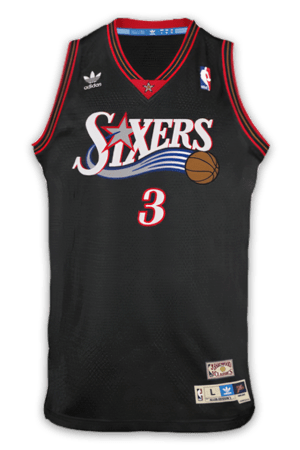 From 1997 to 2009 the 76ers wore a mostly black jersey for the first time in franchise history. This jersey sported the new logo at the time with the swooshing basketball and a star replacing the letter “I” in “Sixers.” 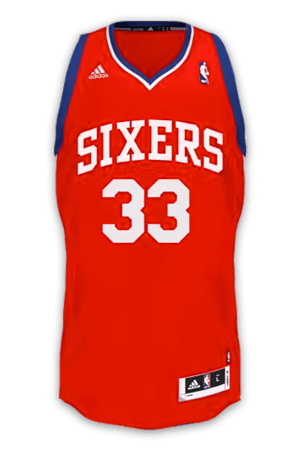 The new 2009 jersey for the 76ers was much more simple. It was entirely red with basic collegiate white lettering spelling out “Sixers.” 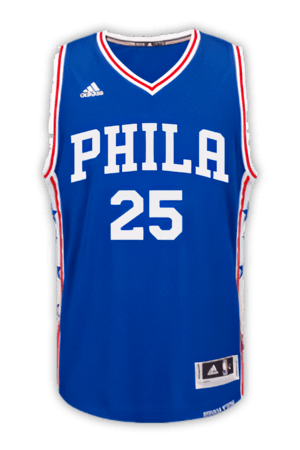 The jersey released for the first time in 2016 is mostly blue with “Phila” written on the front in a similar font to the previous jersey. There appears to be a white stripe down the side with blue stars. 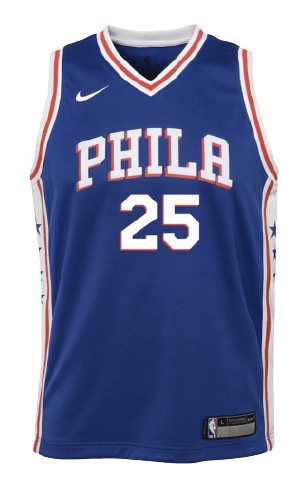 The Sixers’ current jersey is slightly updated with a darker blue and different lettering in the “PHILA.” 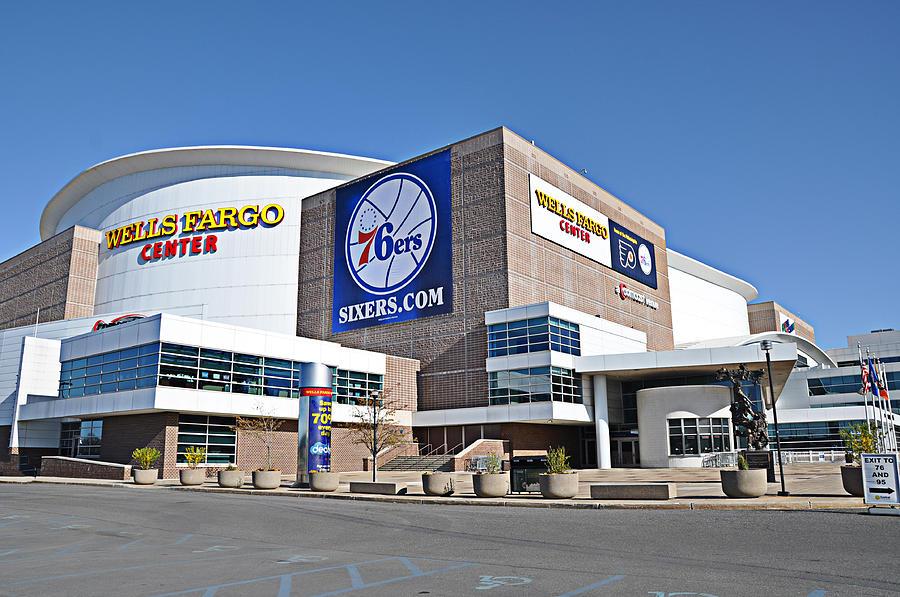 Since the 76ers moved to Philadelphia in 1963, they have played in 3 different arenas. They started out at the Convention Hall and Philadelphia Arena between 1963 and 1967. They moved to The Spectrum between 1967 and 1996. The team has called the Wells Fargo Center home since 1996.

The 76ers aren’t just one of the most famous teams in the NBA, but they’re also the team with some of the most famous fans. It’s not unusual to see stars like M. Night Shyamalan, Michael B. Jordan, Ryan Phillipe, Kevin Hart, and Meek Mill courtside at Sixers games.

If you’re lucky enough to get tickets to a 76ers home game, then the first thing you’ll notice when you enter the Wells Fargo Center are jerseys hanging from the rafters. These jerseys represent some of the best players that made Philadelphia proud, becoming officially retired and never to be worn again. These 10 retired jerseys include:

The 76ers have had a relatively inconsistent history in the last few decades. The team was drastically turned around in the 2001 season thanks to the addition of Allen Iverson. Led by Iversen, the team was able to win over 50 games during the season and even made it to the NBA Finals before losing in game 5 to the Lakers. In 9 Finals appearances in team history, the 76ers have faced the Lakers on 6 different occasions, only beating them once.