The Brooklyn Nets are one of the most beloved franchises in the NBA. The Nets also have quite an interesting history filled with name changes, location changes, and more. Read on to learn about the Brooklyn Nets.

It all started in 1967 when the team the now the Brooklyn Nets played their very first season as the New Jersey Americans. Although they were representing New Jersey, the team played in Long Island, which led them to change their name to the New York Nets in 1969.

In their first six years as a team, they struggled to win many games; however, their luck turned around in 1973 when they recruited Julius “Dr. J” Erving. Erving led the team to a winning streak, where his Nets ultimately won the 1974 and 1976 American Basketball Association (ABA) finals.

In 1976, the ABA merged with the NBA and because the Nets were from a less established league, they had to raise $8 million just to win a position as an NBA franchise. In a crushing blow, in order to help raise the money they had to sell Erving to the Philadelphia 76ers. While the Nets had secured their spot in the NBA, they also had lost their best player and subsequently lost their first five seasons.

As the losses piled up, the Nets moved back to New Jersey in 1977 and played at the Rutgers University Stadium until they moved to their new home in the Meadowlands, New Jersey in 1981. The Nets also drafted a new rookie by the name of Buck Williams who led them to a successful 1982 season. Williams was named Rookie of the Year, and although the team didn’t make it back to the championship, they were finally winning again.

After a few strong seasons, the Nets succumbed to a five-season drought that finally came to an end after drafting Kenny Anderson, Dražen Petrović and Derrick Coleman. While the team showed great promise with their new additions, it was short lived with Petrovic’s tragic death in a car accident in 1993.

From 1967 to 1968, the New Jersey American’s logo felt all-American and featured an American Flag and a basketball.

From 1967 to 1968, the New Jersey American’s logo felt all-American and featured an American Flag and a basketball.

Upon the team’s name change in 1968 to the New York Nets, they updated their logo to simple red block letters with the word nets in cursive while a simple cartoon basketball player dribbled a ball on the side.

In 1972, the Nets received another logo update that removed the cartoon basketball player and instead featured a simple red, white, and blue basketball as the backdrop for the team’s name.

When the Nets relocated back to New Jersey in 1977, they kept the same red, white, and blue basketball while updating their name on the logo.

One year later, in 1978, the Nets logo got a full makeover to really honor their return to the Garden State. This new logo featured the Nets name front and center with a red and blue backdrop and the New Jersey state at the top.

In 1990, the Nets logo got another update going back to a bit more of a traditional look with the red white and blue basketball; however, this time they did not mention a home state in their logo.

1997 - 2012, the Nets donned a new logo that resembled a basketball net and the Nets dunking the ball. They stayed true to featuring red, white, and blue; however, red was the dominant color and with a new darker blue it felt a little less starkly patriotic than their previous logos.

Upon the team's arrival to their new permanent home in Brooklyn in 2011, they adopted a new logo for their upcoming season. In true Brooklyn fashion, the new logo was black and white with a simple white basketball with a black B in the center and a black backdrop with the team name featured at the top. 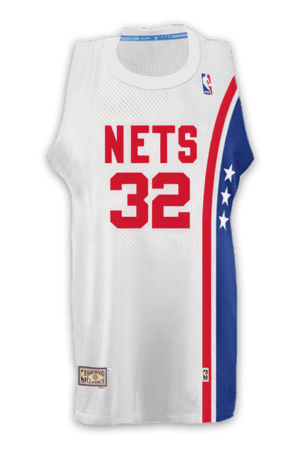 The biggest update to the Nets’ jersey was in 1972 when they went for an all white jersey with blue and red accents resembling the flag on one side. They brought back the all block letters and numbers. 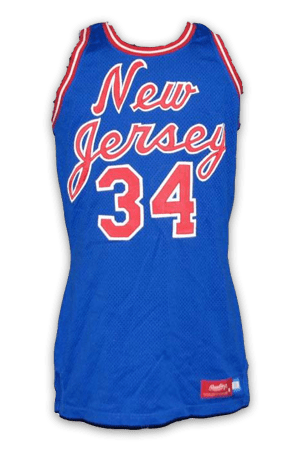 In 1981, the team elected for an all blue jersey with no real accents; however, they updated their numbers to blue and their letter to a red cursive with a white outline. This jersey only lasted one year before going back to their previous jersey. 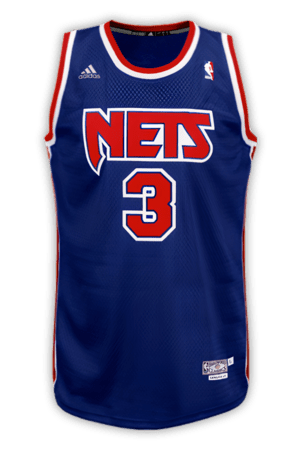 In 1990, the Nets’ jersey went for an all blue base with red and white accents on the side and around the collar. The numbers and letters had a futuristic block feel and were all red with white outlines. 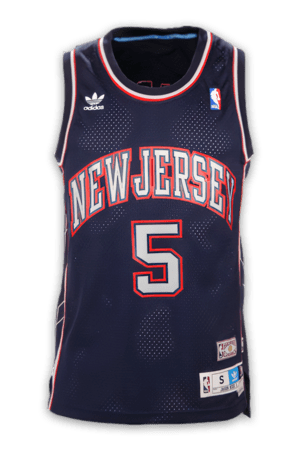 In 1997, the Nets essentially inverted their jersey to an all dark blue base with white and red accents and numbers. 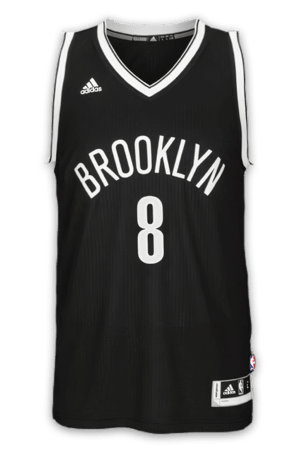 In 2012 when the team officially moved to Brooklyn and became the Brooklyn Nets, their jersey was updated to reflect their new black and white logo. From 2012 to now, their logo has seen minimal changes. In the Nike version, the Nets jersey remains nearly identical.

The Brooklyn Nets called many different stadiums their home prior to moving into their permanent one at the Barclays Center. The team started out in 1967 at the Teaneck Armory in Teaneck, NJ before moving into the Long Island Arena in 1968. For reference, the Long Island Arena was able to seat 6,500 people which is double the size of the Teaneck Armory. In 1969 the Nets moved to Island Garden and spent three years playing there. In 1972 the team moved into their largest stadium yet, the Nassau Coliseum which could seat up to 15,200 fans.

The Nets spent 2010 to 2011 playing at the Prudential Center in New Jersey before the team was purchased by Jay Z and moved permanently to the Barclays Center, which seats 17.732, where they still play today.

Many NBA franchises have famous fans, but the Brooklyn Nets have a star-studded list of fans including A-list celebrities and politicians. A few of the most well known Nets fans include Beyonce Knowles and Jay-Z, Bill Clinton, Rihanna, David Beckham, Paul McCartney, Jimmy Fallon, and Michael Bloomberg.

The Brooklyn Nets seem to be very picky with the numbers they choose to retire. The last time a number was retired was back in 2013 shortly after the relocation to Brooklyn, but also more than 14 years since the last time that happened. Today, six former Nets players have had their numbers officially retired by the team, including:

In the Brooklyn Nets’ recent history, one event in particular stands out: the move to Brooklyn. By 2012, the team was owned by a group of investors that included rapper Jay-Z. The investors decided to move the team to Brooklyn in order to capitalize on New York’s cultural draw. The Nets’ move to Brooklyn came with the grand opening of their stadium, the Barclays Center, which is home to many big events each year, including concerts and the NBA draft.