All but one NBA team is based in the United States. That one outlier is the Toronto Raptors, a relatively new basketball team that was established back in 1995. So how did a team with a history dating back just 25 years clinch the NBA Championship in 2019? You’re about to learn about the history of the lone Canadian NBA team, including information about the early years, logos and jerseys, the stadium where they play, and where the team stands now.

The Toronto Raptors were officially created by Canadian businessman John Bitove in 1993. The team was then led by former NBA All-Star Isiah Thomas, as well as former Pistons assistant coach, Brendan Malone. The first Raptors roster would officially be filled in the 1995 NBA expansion draft.

The name “Raptors” comes from the wildly popular film, Jurassic Park, which was released just two years earlier before the franchise joined the NBA. Before the Raptors played their first season in the NBA, the team formally adopted four team colors: Black, silver, red, and purple. Over the years, the team colors would become more apparent in Raptors jerseys and logos.

Not surprisingly, the Toronto Raptors struggled immensely during their first few years on the court. The team ended their first NBA season with a dismal 21-61 record, but they were somehow able to remain victorious over some of the best teams in the league, like the Chicago Bulls.

The Toronto Raptors struggled to fill their roster with veteran players during its first few years. Finally, in the 1998 season, the Raptors saw the entrance of NBA veterans like Kevin Willis, ultimately leading to an uptick in performance over the next few seasons as a team.

The team logos of the Toronto Raptors has changed a few times since the team was established back in 1995. One thing remains steady between the different logos: The colors black, red, and silver.

During the first 12 years as an NBA team, the Raptors logo consisted of a cartoon dinosaur dribbling a basketball. The logo infused each of the four team colors in a rather decorative design and pattern.

By the 2009 season, the Raptors dropped the purple from the team’s logo and transitioned the logo over to a red, silver, and black design of the same logo from years prior.

The 2015 Raptors Season led to a substantial change in the team’s logo. The team dropped the dinosaur from the logo altogether and simplified the logo with the team’s name clearly printed in white as well as a jurassic looking basketball. 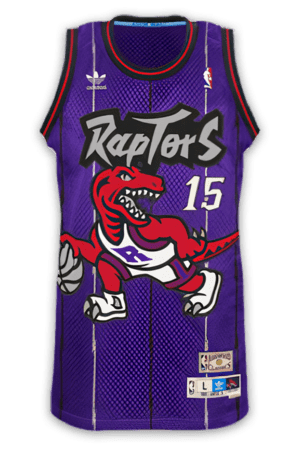 The Toronto Raptors have had an extensive history of changing their jerseys every few years since 1995. The team seems to change its logos much more consistently than its logo.

The initial jersey for the Toronto Raptors was used between 1995 and 1998 as the Raptors played at the SkyDome. The jersey looks very similar to the team logo at the time, which includes all four team colors and a Raptor playing basketball. 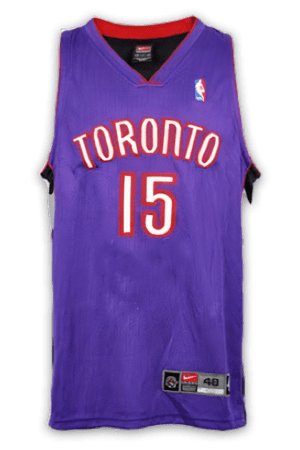 The 1999 season at the Air Canada Centre marked the reveal of the second known jersey for the Toronto Raptors. This jersey was significantly more simple, with a purple overtone and the name “Toronto” on the front. 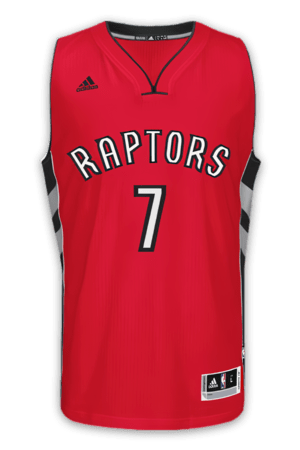 In 2008, the team seemed to have let go of the purple and transitioned over to a similar-looking red jersey instead. This jersey replaced “Toronto” with “Raptors.” 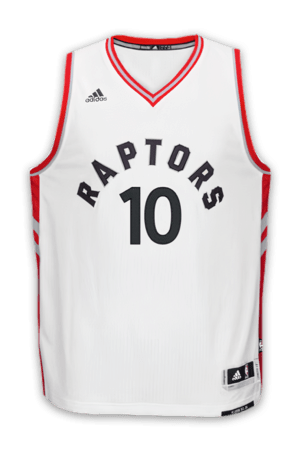 The most recent Toronto Raptors jersey was released in 2015. This jersey is mainly white with “Raptors” printed in black lettering on the front. However, there seems to be a new jersey coming down the pipeline for the 2020 NBA season. 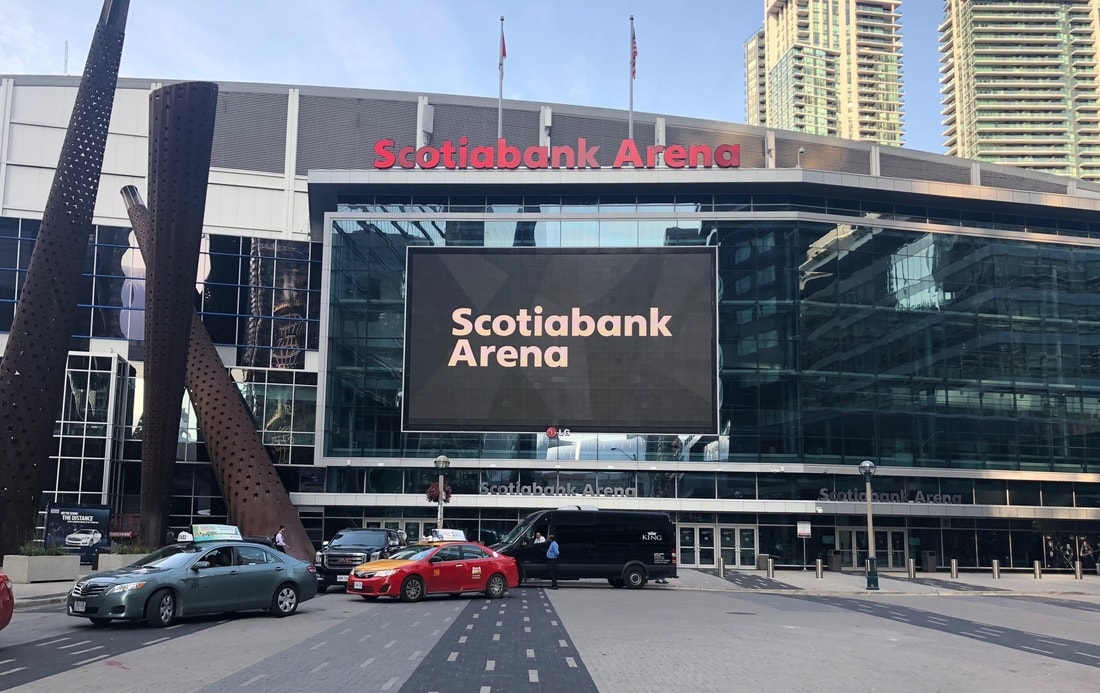 The Toronto Raptors played in downtown Toronto at the SkyDome, now known as the Rogers Centre, for the first four years as an NBA team. This stadium is now the official home of the MLB team, the Toronto Blue Jays. The Raptors transitioned to the Air Canada Centre, now the Scotiabank Centre, on February 21, 1999. This is where the Raptors and the NHL team, the Toronto Maple Leafs, continue to play.

Being the only Canadian team in the NBA, the famous fan base of the Toronto Raptors is a bit narrower than other teams. Drake is often seen as the most famous Raptors fan, but many hand this title over to businessman and superfan Nav Bhatia, who has been to every home game for the team since 1995.

The Toronto Raptors are one of the few NBA teams that haven’t been in the league for all too long. Since the team has only been around for fewer than three decades and many of the standout players are still with the NBA, there are currently no retired jerseys. This is likely to change in the future as the team continues to build its presence in the league and will likely retire Vince Carter’s No. 15 jersey.

Though the Raptors don’t have any retired jerseys, that doesn’t mean that they haven’t seen their fair share of solid players. In fact, there are three former Raptors’ players who have made it to the Basketball Hall of Fame. That includes Tracy McGrady and Hakeem Olajuwon as well as former Raptors coach Lenny Wilkens.

The Toronto Raptors seem to cycle between incredible years with NBA legends and rebuilding years with losing records. Yet, the team’s success seems to have drastically changed course by the beginning of the 2013 season. This was in part due to the drafting of veterans like Rudy Gay and the eventual trade for Kawhi Leonard, an NBA All-Star and Defensive Player of the Year. Since then, it seems the team has developed and become more skilled than ever before.

In the 25 plus years since the Raptors hit the court, the team has won six division titles and has earned a .600 and better records since the 2014 season. The Raptors earned their first NBA Championship in the 2019 season with a 4-2 victory over two-time champion, the Golden State Warriors. This win also marked the first Canadian championship in a major sport since the Blue Jays won the World Series 25 years prior.