The Houston Rockets definitely aren’t the best professional basketball team in NBA history. Yet, in the 5 decades since the team was established back in San Diego, the team has clinched an impressive 7 division titles, 4 conference titles, and 2 NBA Championships. So how did the Houston Rockets go from a 15-67 inaugural season to a back-to-back winner of the title?

By 1966, many people in the NBA began to notice a public interest in sports in the San Diego area thanks to the hockey team known as the San Diego Gulls. With the westward expansion of the NBA in mind, the NBA convinced the owner of the Gulls, Robert Breitbard, to buy a San Diego NBA franchise for $1.75 million. The name “San Diego Rockets” came from the idea that San Diego was known as the “city in motion” and missiles were also built in the area.

The team drafted its first official roster during the 1967 NBA Draft under the leadership of former Royals coach Jack McMahon. The inaugural season for the San Diego Rockets was well-below expectations, ending with a pathetic 15-67 record. Luckily, the drafting of Elvin Hayes to the Rockets led the team to a playoff appearance in the 1969 season. Yet, the team only lasted in San Diego for 4 seasons until the team was sold in 1971 and relocated to Houston, Texas.

While in Texas, many doubted the potential success of the Rockets due to a seeming lack of athletic interest in the State of Texas. One of the first major moves after the relocation to Texas was the hiring of new head coach Tex Winter, who didn’t mesh well with team standout Elvin Hayes. Hayes eventually left the team for that exact reason. Yet, the loss of Hayes didn’t impact the team for too long, with the Rockets clinching a playoff appearance in the 1975 postseason.

The late 1970s were a time for changes for the Houston Rockets. The time period meant signing Moses Malone (league-leader in rebounds), finally advancing to the conference finals against the 76ers, and the sale of Rockets for a whopping $9 million. After the turn of the decade, the Rockets made the NBA Finals in the 1981 season, although they lost to the Boston Celtics.

Just a year later in 1982, the Rockets were sold again, this time at an $11 million price tag to a businessman named Charlie Thomas. After Thomas acquired the team, a University of Houston standout by the name of Hakeem Olajuwon was drafted for the 1984 season. The assistance of Olajuwon led the Rockets to a season-high of 58 wins and another appearance in the NBA Finals during the 1986 postseason, again falling to the Boston Celtics.

The Rockets were sold just a few short years later in 1993 to Leslie Alexander for a price of $85 million. The next year was history-making for the once-struggling Rockets, able to advance to the NBA Finals during 2 consecutive seasons and win both. The back-to-back championships would remain the Rockets’ most significant achievement as a team today.

The Rockets have experimented with several different logos in the 5 or more decades spent as an NBA team.

The first logo was flaunted between 1968 and 1971. It had an orange basketball in the center with a blue rocket sitting diagonally at the front. “San Diego Rockets” could be seen scrawled in yellow lettering along the outer green circle.

The logo used for the 1972 season included a cartoon character wearing a jetpack with flames trailing from the back. “Houston Rockets” was written within the flames and the character appeared to be spinning a basketball labeled “NBA.”

From 1996 to 2003, the Rockets sported another logo depicting a dark basketball. This one said “Rockets” on the front with an embossed-style of lettering and had a rocket with a shark-like face in motion at the top.

Until 2019, the Rockets used a more simplistic logo. This one said “Houston Rockets” in red all-capital lettering with the letter “R” in the center, looking similar to a rocket taking off.

The brand new logo for the 2020 season used the “R” design from the previous logo and stuck it in a grey and black basketball. “Houston Rockets” surrounds the “R” on what seems to be a planetary ring around the basketball. 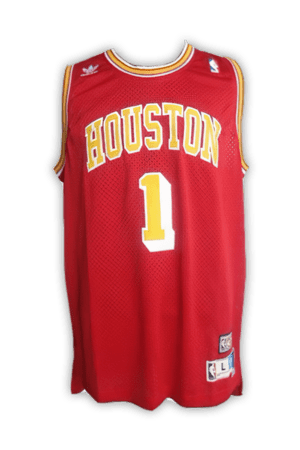 The first jersey in Houston lasted only two seasons between 1971 and 1972. It was mostly red with “Houston” written in yellow all capital letters surrounded by white outlines. 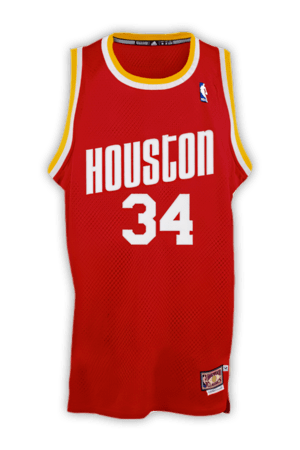 The jersey worn between 1972 and 1995 was also red, using white lettering and a brand new font to spell out “Houston” instead. 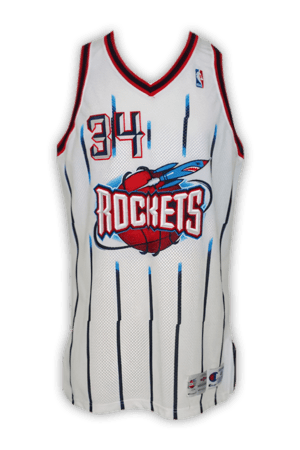 The jersey released in the season beginning in 1995 was mostly white with sporadic pinstripes going down the front. It included a basketball and rocket logo with “Rockets” written on the front. The player number had somewhat of a 3D appearance. 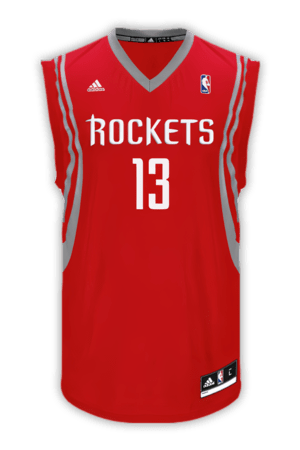 The jersey here was first worn in 2003. The main color of the jersey was red with “Rockets” written in small white lettering along the front. 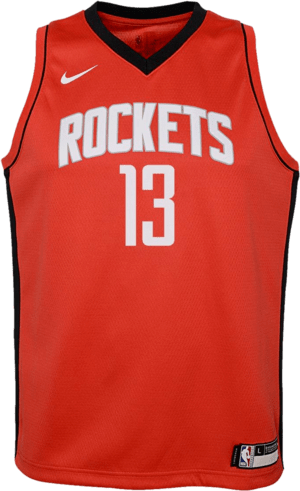 Today, the Rockets don an all red jersey with a simple design. The jersey has “ROCKETS” written in simple lettering and boasts black vertical stripes along the sides of the jersey for a little added color. 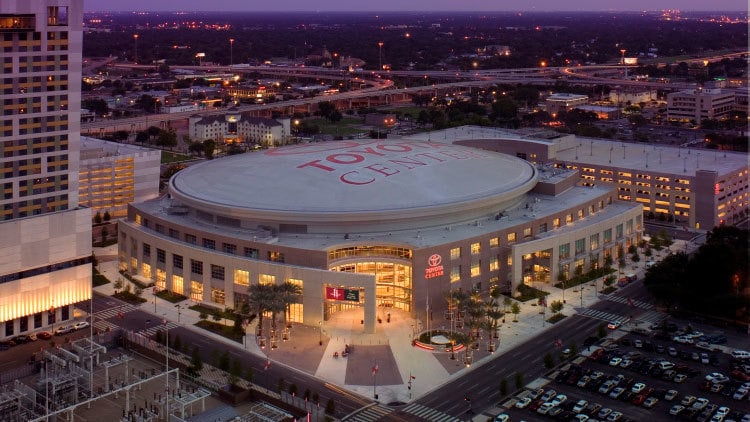 While still the San Diego Rockets, the team played at San Diego Sports Arena out in California. The move to the Houston area led the Rockets to play at the Sam Houston Coliseum, the AstroHall, and the Astrodome. The team considered the Hofheinz Pavilion on the University of Houston Campus “home” until moving to the Summit in 1975. The Rockets finally moved to their current arena, the Toyota Center, at the start of the 2003 season.

The Houston Rockets have amassed quite the fan following, and a few of those fans are also people you may have seen in the magazines or listened to over the radio. Rockets fans include Beyonce and Jim Parsons, who both happen to be Houston natives.

The Houston Rockets are a team that’s seen some of the greatest NBA stars of all time on their roster. A few of those players stood out more than most and likely became a household name around the dinner table during their prime. The 6 retired numbers for the Houston Rockets are:

In addition to these 6 former Rockets, the team retired the “CD” jersey to recognize the efforts of Carroll Dawson. He spent nearly 3 decades with the Houston Rockets as both a general manager and an assistant coach.

With such an impressive franchise lineup, 12 players make themselves at home in the Basketball Hall of Fame. That includes Yao Ming, who spent 8 seasons with the team and recorded 19 points and 9.2 rebounds per game, on average. The most well-known Rockets player in recent history is 17-year veteran Hakeem Olajuwon. He averaged 22.5 points, 3.2 blocks, and 1.8 steals per game in over 1,000 appearances with the Houston Rockets.

The early 2000s brought 7’6” Yao Ming to the Houston Rockets lineup, one of the most recognizable NBA players. The team also managed to draft the eventual league-leader in scoring and MVP, James Harden. The introduction of Russell Westbrook further solidified the Rockets’ desire to reestablish themselves as a force to be reckoned with.

The Houston Rockets have been able to make playoff appearances every year since 2013, snagging 3 division championships along the way. In the entire history of the Rockets, the team has advanced to the NBA Finals on 4 separate occasions. Two of those NBA Finals appearances occurred during back-to-back postseasons in 1994 and 1995, with the Rockets winning both titles (against the Knicks and then the Magic).