Before the Oklahoma City Thunder existed, they were the SuperSonics, a professional basketball team based out of Seattle, Washington in 1967. The team was established with the help of Los Angeles businessmen by the names of Eugene V. Klein and Sam Schulman, who also happened to be owners of the San Diego Chargers down in California. The name “SuperSonics” came from a potential plane design by airplane manufacturer, Boeing.

Under the leadership of head coach Al Bianchi, the SuperSonics claimed their first victory as a team during their third game of the 1967 season. Though the team ended the season with a dismal 23-59 record with the help of Walt Hazzard, the team would come to fill the roster with the likes of Lenny Wilkens and Bob Rule. Both would go on to score over 20 points per game and would both see playing time in the 1970 NBA All-Star Game.

With the help of new head coach Bill Russell, the SuperSonics were able to secure their first playoff slot during the 1975 season. The coaching staff was then twice upheaved during the next few seasons, eventually settling on former SuperSonics player Lenny Wilkens as the head coach for the team. The team won what would be the team’s only NBA Championship in the 1979 season against the Washington Bullets.

As the Seattle SuperSonics, the team frequently shifted from one logo to another.

Between 1968 and 1970, the SuperSonics logo was entirely green and white. The logo includes what appears to be a space needle (which was built in Seattle in 1861) as well as a green basketball alongside the name “Seattle SuperSonics.”

In 1971, the team logo was simplified to a simple green basketball with “Seattle SuperSonics” engraved on the front.

The team logo adopted more of a retro-style in 1972, using modern lettering for the time.

Between 1976 and 1995, the Seattle SuperSonics logo transitioned to more of a skyline view of Seattle infused into a basketball, this time adding the color yellow to the logo in the background.

By 1996, the logo changed again to add orange and red to the logo while also stylizing the letter “I” in “Sonics” with the Seattle Space Needle. The “Super” aspect of the name was dropped, simply referring to the team as the Seattle Sonics.

In the final logo as the SuperSonics starting in 2002, the logo returned to the green, yellow, and white design. This final SuperSonics logo plays around with new fonts and includes a stylized letter “S” atop of a yellow basketball on a green background.

Since being known as the Oklahoma City Thunder in 2008, the team has used this logo. It shifts toward blue and orange coloring with large “Thunder” written on top and “OKC” over the basketball design in the center. 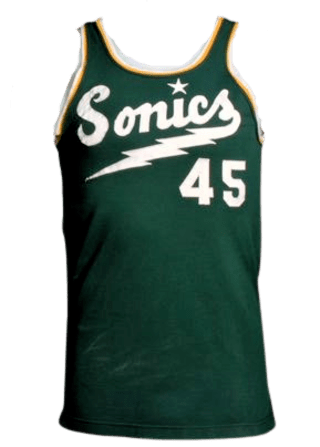 In the team’s first year (1967), the Sonics rocked a green jersey with white lettering. The jersey had “Sonics” scrawled in cursive lettering, with the line from the “S” extending below the team’s name in the shape of a lightning bolt. The letters and numbers were a deep green with gold borders, colors that were also seen near the arm holes. 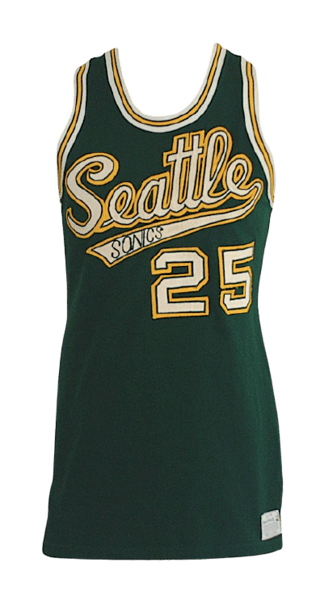 In 1969, the Sonics kept their green jersey design, but added yellow around the lettering. In this version, Seattle is in cursive while the team name was added to the underline. 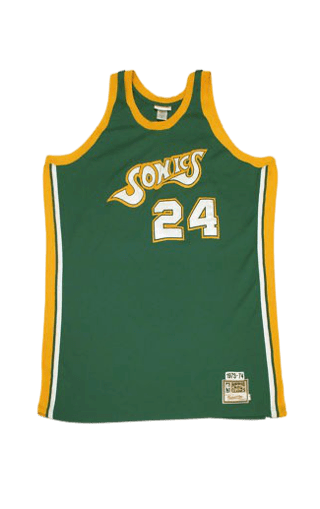 By 1972, the Sonics jersey took on more of a retro feel. This jersey kept the mostly green theme, but changed the font to be more modern and vintage. 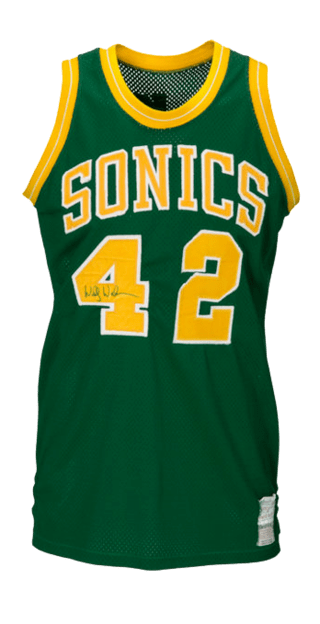 This 1975 jersey was simple, with “SONICS” written in plain yellow letters. The numbers were bordered with white, and a yellow accent around the arm holes. 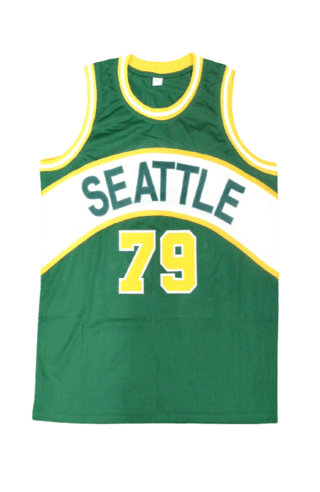 In 1978, the Sonics opted for a dark green jersey. A horizontal block went through the middle of the jersey, with “Seattle” written in large letters in the white block. The white portion was bordered by a gold strip, the player number was in huge gold characters at the bottom of the jersey, and yellow accents went around the jersey.

In 1986, Seattle slightly changed their jerseys. This iteration had “SONICS” instead of “SEATTLE” in the white horizontal block over the chest. 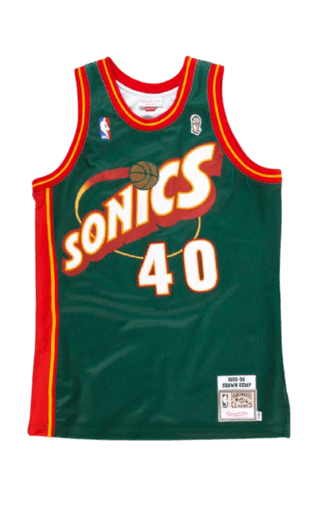 In 1995, the Sonics stuck with the green, but changed the design of the jersey. “SONICS” was added at an angle in white letters with 3D borders for a more modern feel. A basketball, followed by a red line showing movement, was the centerpiece of the jersey. 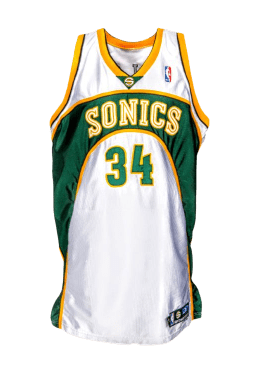 In 2001, the Sonics kept the theme of green and yellow, but added a lot more white. “SEATTLE” was written in a neat font at the center in yellow and gold, surrounded by a curved white portion. The player number was added in a green shade, and all green portions of the jersey were outlined with gold. 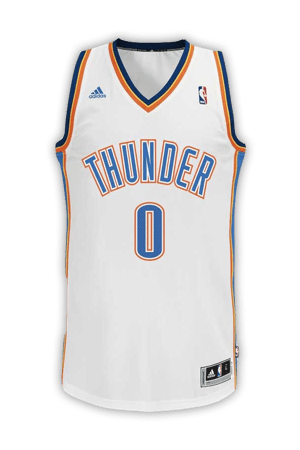 Since becoming the Oklahoma City Thunder, the team has only had one jersey.

This jersey was created in 2008 during the team’s inaugural season in Oklahoma City and simply uses the name “Thunder” in blue font on a white jersey with orange highlights. Yet, the team has also had Christmas versions of the jersey for each year from 2012 to 2016 as well as alternate jerseys. 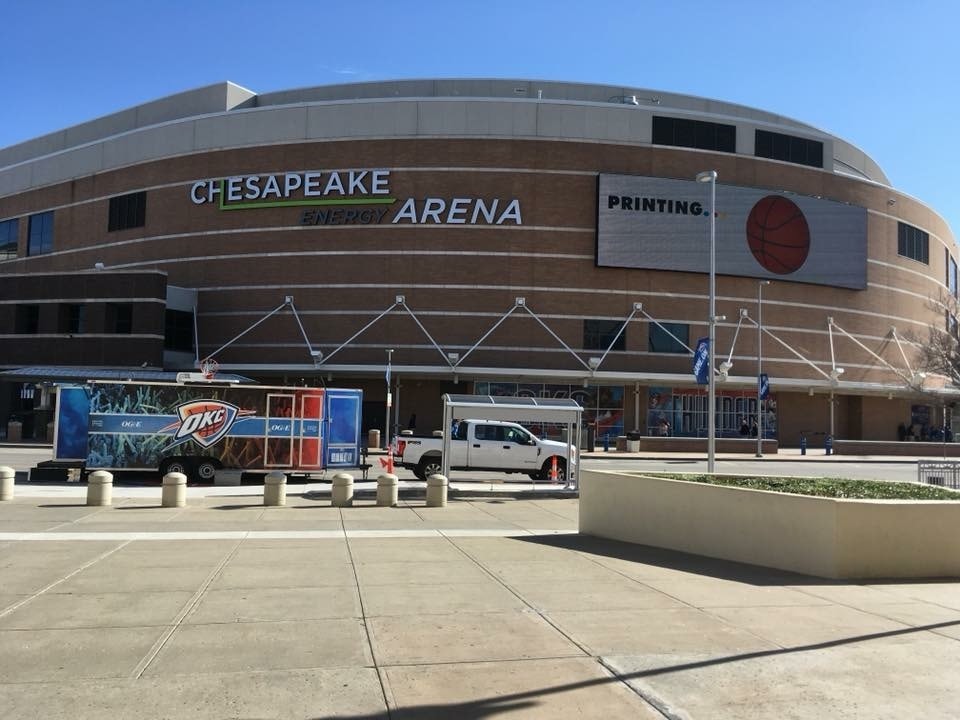 The Thunder have a pretty solid celebrity fan base, despite playing quite far from the hub of celebrities (Hollywood). Celebrities like Nas, Bill Hader, and Kristin Chenoweth are proud Thunder fans. 50 Cent, Paul McCartney, and Kate Upton have been seen at games as well.

The 1970s and 1980s held some of the greatest seasons in SuperSonics history. After such success in post-season play, the team honored the commitments of 6 powerhouses on the court by retiring their jerseys forever. Since relocating to Oklahoma City and renaming the team the “Thunder,” 1 additional jersey has been retired. The retired jerseys include:

As impressive as seven retired jerseys is for an NBA team, it’s important to point out that the Thunder also have had 11 players inducted into the Basketball Hall of Fame. That includes player/coach Lenny Wilkens, who played for the SuperSonics for a period of 3 years and later went on to coach the team for several years into the late 1980s. It’s also expected that current superstar Kevin Durant will find his way into the Hall of Fame in the future.

The Seattle SuperSonics eventually made it to the NBA Championship in the 1996 season, but ultimately fell to Michael Jordan’s Chicago Bulls in six games. By the year 2000, former Starbucks CEO Howard Schultz sold the SuperSonics for a whopping $350 million and the team relocated to Oklahoma City, Oklahoma. Fans chose the team name as “Thunder” thanks to the development of the U.S. Army’s Thunderbirds in the area.

The team’s success took a drastic turn in 2007 after recruiting newcomer Kevin Durant, who is still considered one of the best players in the league today. The Thunder locked down an NBA Finals appearance in the 2012 season but proved unsuccessful against the powerful Miami Heat. Unfortunately, Kevin Durant eventually left the team in 2016, though the team has maintained winning records since his departure.

Despite the loss of such a powerful player, the recent history of the Oklahoma City Thunder is quite clear and paints a rather bright future for this formerly unknown team. The team has successfully clinched 5 division titles between 2010 and 2016 and earned the title of conference champion in 2012. Though the team doesn’t end every season with a title in hand, the Thunder is still the only professional sports team in Oklahoma and maintains a loyal fan base year in and year out.