The New Orleans Pelicans have technically only been an NBA team since 2012, but their history traces back to Charlotte, North Carolina in 1988. So how did a team with absolutely no NBA titles to its name sell out home games with no problem? To completely understand how that happened, you’ll have to take a look at the complete history of the New Orleans Pelicans.

The team we now know as the New Orleans Pelicans was once recognized as the Charlotte Hornets (not the same Hornets that play in the NBA today). In 1988, the NBA was looking to add a few teams to the league across the country. That was when a North Carolina entrepreneur by the name of George Shinn decided it was time to bring professional basketball to Charlotte. He saw the popularity of college basketball and an increasing population as a good sign.

In 1988, the NBA approved a team for Charlotte, North Carolina. The team name was once supposed to be the “Spirit,” but was eventually left up to a public naming contest that led to the name “Hornets” being coined. The 1988 inaugural season for the Charlotte Hornets brought on head coach Dick Harter and veteran NBA players to get the team off to a good start. In fact, the first team was able to capture a victory against the Chicago Bulls led by Michael Jordan.

While in North Carolina, the Hornets were able to draw massive crowds and continuously set NBA records for the number of tickets sold. This continued into the early 1990s when the Hornets signed future Rookie of the Year Larry Johnson in 1991 and Alonzo Mourning in 1992. The 1993 season brought the Hornets their first winning season in their 5th year as a professional NBA team.

In the 14 years that the Charlotte Hornets spent in North Carolina, they were able to advance to the playoffs on 7 different occasions. However, a lack of support for team owner George Shinn and dwindling ticket sales led the team to relocate to New Orleans. The team now known as the Charlotte Hornets were once named the Charlotte Bobcats, retaining the rights to the “Hornets” name in 2014.

The team now known as the New Orleans Pelicans have gone through quite the array of team logos over the course of the franchise’s history.

The first logo used between 1989 and 2002 represented the team’s home town of Charlotte, North Carolina. The logo had a teal and blue hornet dribbling a basketball and “Charlotte Hornets” scrawled on the logo. “Charlotte” could be seen in the center of the hornet’s body.

The move to New Orleans for the 2002 season brought an upgrade to the previous logo. This logo replaced “Charlotte” with “New Orleans,” changed the color of the basketball, adjusted the font used, and added “New Orleans” to the center of the hornet’s body.

The 2009 logo for the New Orleans Hornets gave the logo a bit of a more digital appearance and replaced the “New Orleans” in the center of the hornet’s body with an easier to read “NOLA.” There was a slight shift in the shade of blue.

The 2014 logo is still used today by the New Orleans Pelicans. This logo has “New Orleans” written in white font across the top. There’s also a gold, blue, and red pelican in the center of the logo with its wings spread. The name “Pelicans” is written in small white lettering at the bottom and a small fleur-de-lis representing Louisiana can be seen at the top in red. 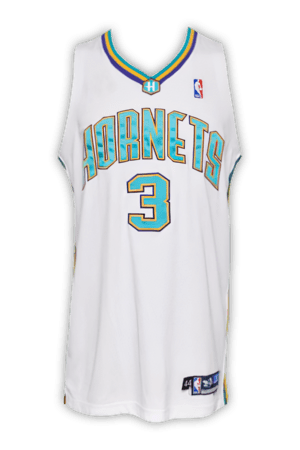 The first jersey worn after the move to New Orleans in 2002 was mostly white with “Hornets” and the player number in a teal color. 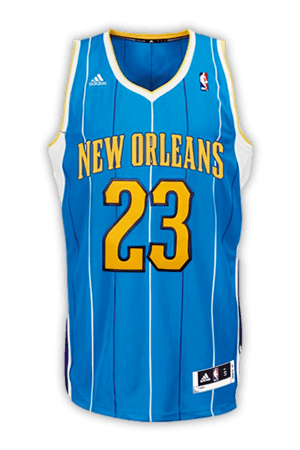 From 2008 to 2013, Pelicans players wore a mostly blue jersey with dark blue and white pinstripes. The name “New Orleans” was written on the front in gold lettering and dark borders. 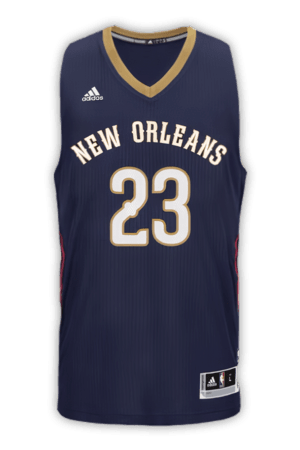 This one was designed in 2013. The pelicans wear a jersey that’s dark blue with gold accents here and there. The lettering is white with a gold border and the font is the same that’s used in the logo. 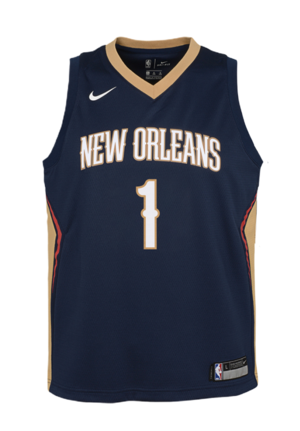 The current Pelicans jersey, introduced in 2017, is slightly altered from the Adidas version. The biggest difference is in the font in “New Orleans.” 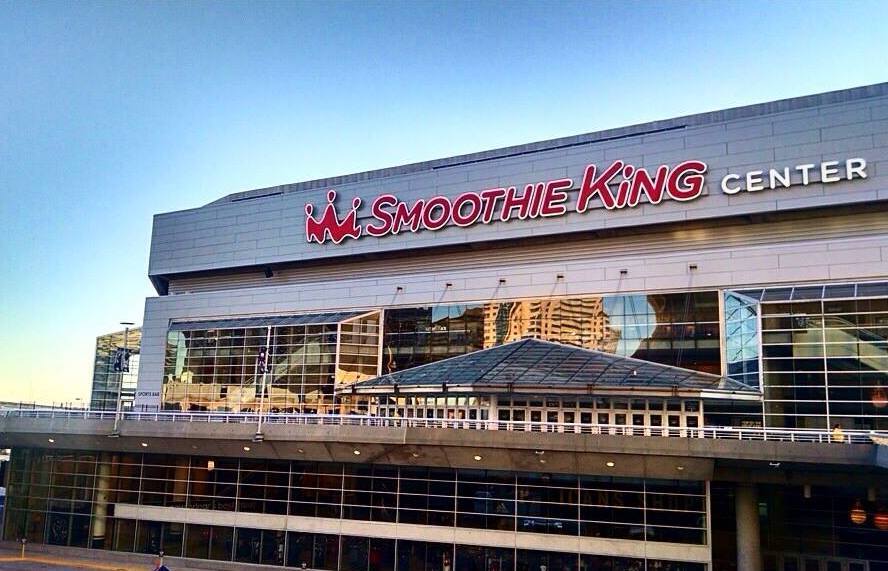 From 2002 until now, the Pelicans have played at the stadium now known as the Smoothie King Center. However, the team also called the Ford Center in Oklahoma City home after the devastation of Hurricane Katrina until 2007. Back in Charlotte until 2002, the Hornets played at the Charlotte Coliseum.

New Orleans native Lil Wayne is reportedly a supportive Pelicans fan, though the rapper has been known to frequent Lakers and Rockets games as well.

One of the greatest honors in sports is retiring a player’s number. Yet, since the New Orleans Pelicans have only been shooting hoops since 2002, it makes sense that their retired numbers list is relatively scant. In fact, the only number retired by the Pelicans is #7, which was worn by Pete Maravich. Though he never actually played for the Pelicans, Maravich played a vital role in the success of basketball in New Orleans throughout college and during his time with the Jazz.

The Pelicans are still getting their bearings down in New Orleans, but the team did once have a successful roster while playing out of North Carolina. Because of that, the Pelicans now have 3 former players in the Basketball Hall of Fame. These players include newly-inducted Vlade Divac, a Serbian basketball player who spent time with the Hornets in the late 1990s. It also includes Alonzo Mourning as well as a 21-year NBA veteran, Robert Parish.

The relocation of the Charlotte Hornets to New Orleans brought professional basketball back to the area for the first time in nearly 20 years. However, the team was forced to relocate once more on a technicality after the devastating Hurricane Katrina hit New Orleans directly. During the 2 years following the hurricane, the Hornets played in Oklahoma City, setting the stage for the Seattle Sonics to relocate to the city a few years later.

In 2005, the New Orleans Hornets brought Chris Paul to the team and followed up solid drafting with the addition of Anthony Davis in 2012. During that same year, the New Orleans Hornets were renamed to “Pelicans,” a nod to the Louisiana state bird. The renaming of the team led Charlotte Bobcats’ owner Michael Jordan to request a name change to his own team, bringing the Hornets back to Charlotte.

Since moving to New Orleans in 2002, the Pelicans/Hornets have seen seven playoff appearances. They even went on to capture the division championship in 2008. Until this day, the Pelicans have not made the NBA Finals.