The New York Knicks (also known as the Knickerbockers) are a team of firsts. They played in the first-ever BAA game in 1946, drafted the first-ever non-white basketball player, and then drafted the first African American basketball player in the NBA. So how did a team with a shooting percentage of just 28% in its first season secure two NBA titles since its start? Let’s go over everything there is to know about the New York Knicks.

The 1940s were prime time for college basketball, a concept that the Boston American sports editor and the owner of the Boston Globe caught onto quickly. They wanted to form a professional basketball team that would highlight college basketball players after their college days were over. The two set out to have Madison Square Garden as the team’s official arena, but the team was ultimately awarded to the president of the arena (Ned Irish) in 1946.

The name “Knickerbockers” came from the nickname used for Dutch settlers in the New York area in the early days. The newly-formed New York Knicks set out on their inaugural season in 1946 with a game against the Toronto Huskies. The Kicks were able to clinch a victory during their first-ever game, also the first game in BAA history. Despite the early success, the Knicks didn’t make it far in postseason play.

1947 brought coach Joe Lapchick as well as the first non-white basketball player in league history, Wataru Misaka. The season beginning in 1949 meant the merging of the two professional basketball leagues at the time, which made the NBA. The team known for firsts also brought on the first African American player, Sweetwater Clifton, in 1950 as well as future Hall of Famer Carl Braun. The new team was an immediate success, advancing to the NBA Finals 3 consecutive years in 1951, 1952, and 1953.

The team struggled with mediocre playing and lack of achievement for quite a few years until the groundbreaking 1970 Knicks season. Not only did the team lock down an 18 game win streak, but they also made it to the NBA Finals and snatched the title away from the Los Angeles Lakers. In 1972, the Knicks and Lakers found themselves head to head for the championship once more. Though the Knicks lost in 1972, they faced the Lakers again in 1973 and won.

Between 1988 and 2001, the Knicks consistently qualified for the playoffs each and every year. The Knicks even made it to the NBA Finals on another two occasions, 1994 and 1999, but couldn’t prevail.

The New York Knicks have had plenty of logos since the team was officially created in 1946.

The first logo was used until 1964 and had a basketball being dribbled by a character known as “Father Knickerbocker.”

From 1965 to 1979, the first prototype for today’s logo was used. It had a brown basketball and “Knicks” written above it in 3D orange lettering.

The 1980 logo touched up the previous logo to make it cleaner. This logo included an orange basketball and replaced the orange lettering for “Knicks” with dark red lettering. There were blue borders around all lines.

From 1984 to 1989, the Knicks used a darker basketball in the logo and used prominent blue outlines around the lettering. The 3D portion was turned grey.

The logo introduced in 1990 replaced the brown basketball with one that was blue and orange.

The 1993 to 1995 logo for the Knicks placed the previous logo on top of an upside-down grey triangle. The grey in the 3D portion of “Knicks” was replaced with black.

The same logo was used starting in 1996, only adding “New York” above the last logo.

The 2012 logo (and current logo) returned to the grey, blue, and orange theme. 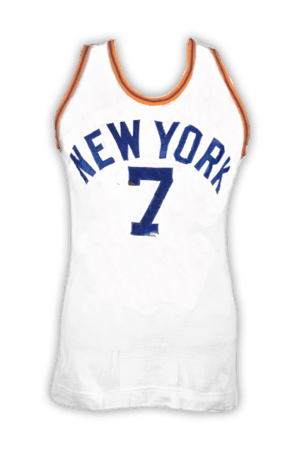 The first jersey used between 1946 to 1952 was mostly white with blue lettering. “New York” was written on the front. 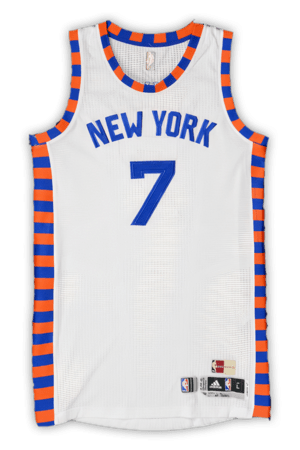 From 1953 to 1962, the Knicks used a bit of a unique jersey. This one was mostly white with smaller blue lettering spelling out “New York.” Horizontal blue and orange stripes went up the sides of the jersey. 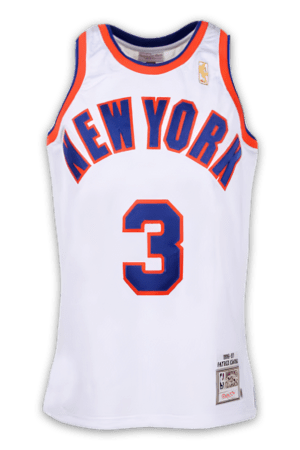 The 1962 to 1968 jersey was mostly white with blue lettering and orange outlines. 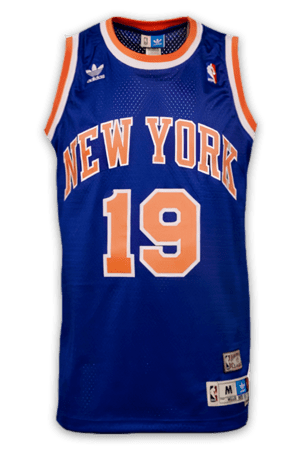 The first blue jersey was introduced by the Knicks in 1968. This jersey had orange lettering and white outlines. 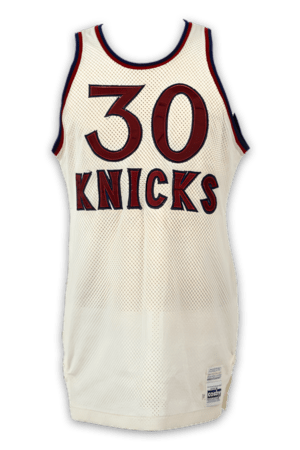 More of a retro-style jersey was adopted in 1979. This particular jersey was mostly an off-white color and had “Knicks” written in dark red beneath a large number. 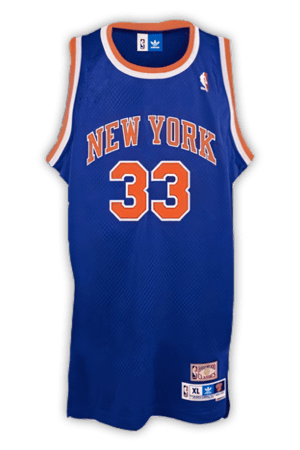 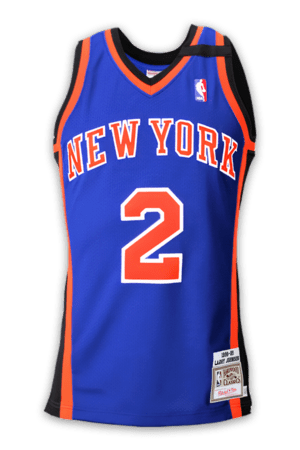 Starting in 1998, the Knicks added black highlights to the previous jersey. Black vertical stripes could be seen going up the sides of the jersey. 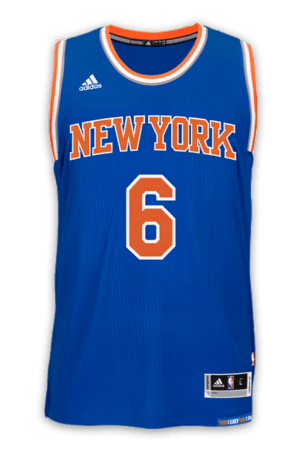 The current jersey was established in 2013 and incorporates more white highlights than black. It looks very similar to the jerseys worn by the team decades ago. The Knicks’ Nike jersey remains largely unchanged from this classic design. 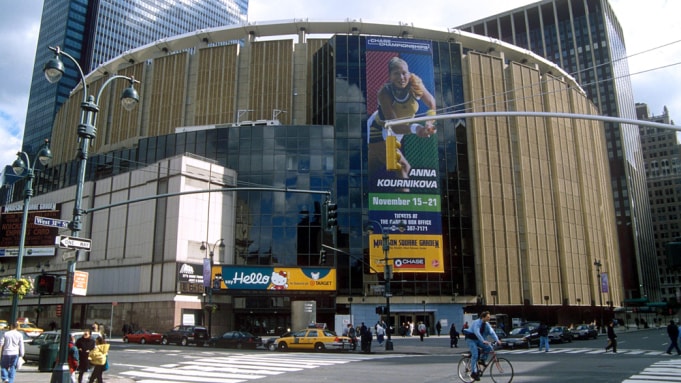 The New York Knicks have consistently played at Madison Square Garden, a massive arena also used by the NHL’s New York Rangers. The team has played games outside of the arena due to difficulties with scheduling.

It’s to be expected that one of the oldest teams in the league has also gained popularity among celebrities. Knicks players have hit the court in front of stars like Spike Lee, Woody Allen, Olivia Wilde, and Ricky Gervais.

Despite being called “home” by a good portion of modern-day NBA All-Stars, the New York Knicks don’t have much to show for in one sense: Their retired numbers. The last time the Knicks retired a number was back in 2003, though the team currently has 8 players that have been awarded this accomplishment. These players include:

One additional number was retired by the New York Knicks back in 1990: No. 613. This number was dedicated to Red Holzman, who served as the team’s head coach for 15 years. The No. 613 is symbolic and stands for the number of victories the Knicks clinched while Holzman was at the helm.

Despite not having a new retired number in nearly 2 decades, the New York Knicks do have 22 previous players inducted into the Basketball Hall of Fame. That includes players who spent more than 10 seasons with the Knicks, like Bill Bradley, Carl Braun, Patrick Ewing, and Willis Reed. During his 15 years with the Knicks, Patrick Ewing netted 22.8 points per game and was chosen as an All-Star 11 times.

The New York Knicks went through a bit of a low period during the early 2000s, though the drafting of players like Carmelo Anthony, Jeremy Lin, and Amar'e Stoudemire helped the team toward success. The Knicks made three consecutive playoff appearances from 2011 to 2013, even clinching the division championship in 2013. Since then, the New York Knicks have been in the process of rebuilding as a team.