The Cleveland Cavaliers are most recently known as the team LeBron James played for; however, the team has a rich history stemming all the way back to 1970 when they started out as an expansion team in the NBA.

In 1970, Nike Mileti founded the Cleveland Cavaliers. The team had a rocky start and didn’t win any titles until 1976, when they won the Central Division title and went to the playoffs for the first time. In 1980, Mileti sold the franchise to Ted Stepien for $2 million. Under Stepien, they lost nearly $15 million in coaching changes, trades and drafts, and poor attendance from the team's fans. There is now a rule in place named the “Stepien Rule”, which bars teams from trading consecutive first round draft picks.

This led to financial turmoil and Stepien sold the team to George and Gordon Gund for $20 million. This purchase also allowed the Cavaliers to remain in the Richfield Coliseum, which was owned by the Gunds. The Cavaliers returned to the NBA playoffs in 1988 and the following season, achieving a record of 57 wins and only 25 losses, making it clear the Cleveland Cavaliers were on the rise.

Although the team did not win the finals, they still made it to the playoffs for five consecutive years in the early 1990s. After that, the team floundered and did not return to the NBA playoffs from 1998 to 2005. In 2005, the Cavaliers were bought by Dan Gilbert for a hefty price of $375 million. The following year, and largely thanks to LeBron James, the Cavaliers returned to the playoffs in 2006.

The Cleveland Cavaliers have only won one NBA championship in 2016 against the Golden State Warriors. The championship was a monumental victory for Cleveland, as they became the only team to come back from down 3-1 in the finals.

The Cleveland Cavaliers have been through a few different logos through the years.

At the team's founding in 1970 the logo featured a cavalier in red, a yellow basketball, and the team’s name in a circle.

In 1983, the Cavaliers updated their logo to simply say “Cavs” with the V being decorated to look like a basketball hoop. The logo was monochromatic in red.

In 1994, the team updated their logo again. The logo still used the team’s nickname “Cavs;” however, the basketball hoop was no longer part of the letter V and instead was on its own above the team’s name. The logo also changed from red to blue.

In 2003, the Cavalier’s color scheme received an update to a wine colored red and deep navy blue. The logo felt more stoic with a basketball, the team’s name, and a simple cavalier sword.

In 2017, the Cavalier’s updated their logo once again to a shield, sword, and just the letter C along with the team’s name. 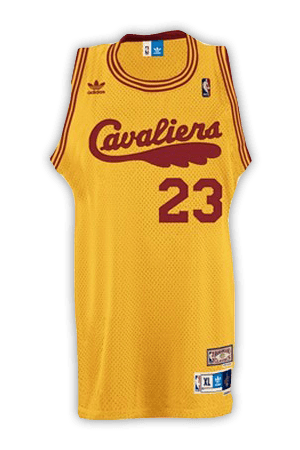 In 1970, the Cleveland Cavaliers donned a yellow and red jersey with a feathered accent on the letter C to represent a Cavalier’s hat. 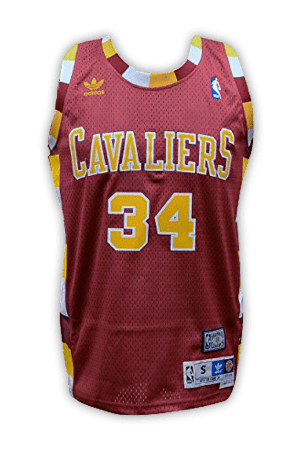 In 1974, the Cavalier’s jersey received an update and was a red jersey with yellow accents and block letters and numbers. 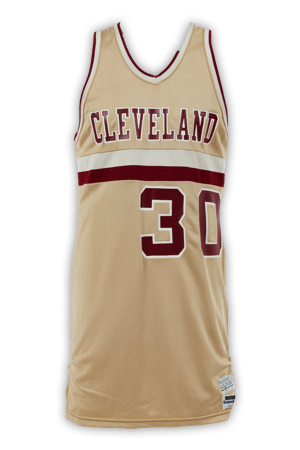 In 1980, the Cav’s jersey moved into a more monochromatic world with a tan jersey and wine red and white accents. 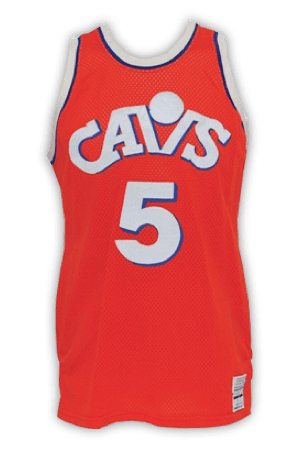 1983 saw yet another rendition of the Cavaliers’ jersey and this time it reflected the team’s logo. The jersey was red with the word CAVS on the chest and the V was turned into a basketball net. 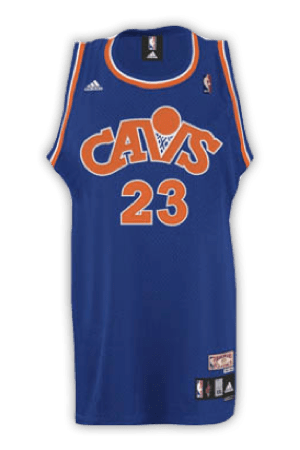 In 1987, the Cavaliers’ jersey was inverted to a blue jersey with red letters and accents. 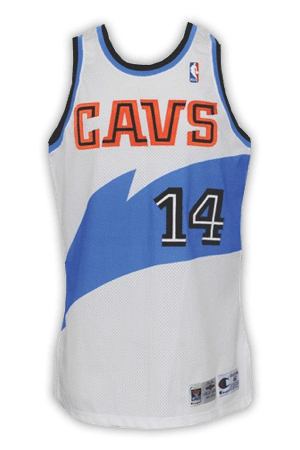 In 1994, the team donned a white jersey with a blue streak across the middle and the team's name in orange block letters on the chest. 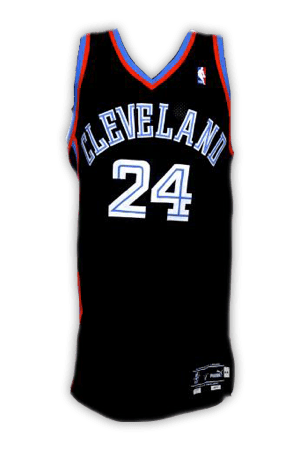 In 1999, the Cavaliers’ wore a black jersey with red and blue accents. 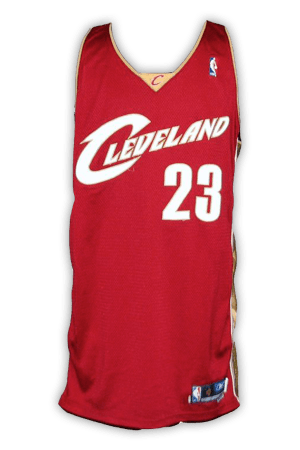 In 2003, the team rocked a red jersey with a small font update for the team’s name on the chest. 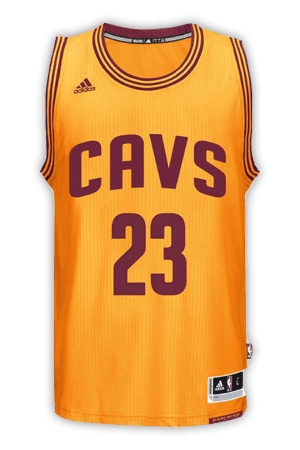 By 2010, the Cavaliers chose to wear a yellow jersey with deep red accents. 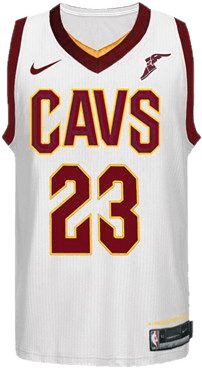 The jersey worn since 2017 is the most rustic yet. This jersey has “CAVS” in dark red font and yellow accents, with sharp looking numbers just below. 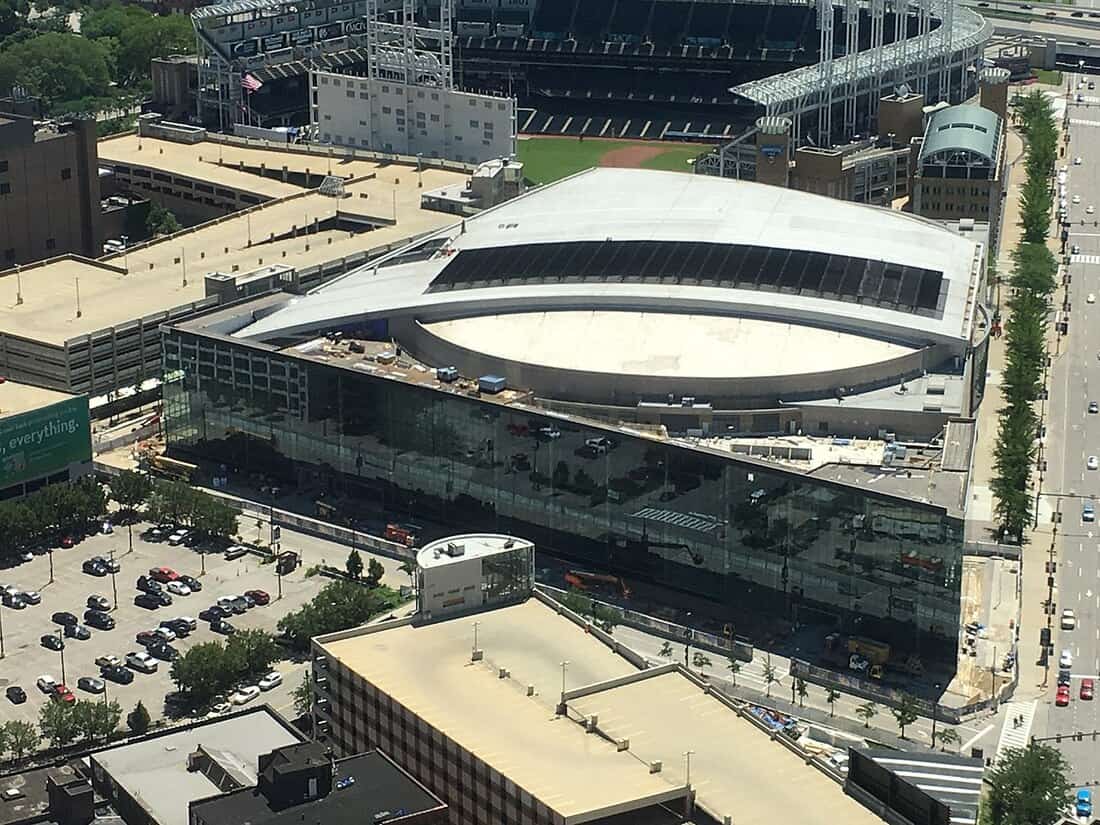 Due to Lebron James’ star power, there are many other famous stars who are Cavaliers’ fans. R&B singer Usher is even part owner of the franchise. Other famous fans include Jay-Z and Beyonce, Warren Buffet, Justin Bieber, Hulk Hogan, Jimmy Hart, Michael Strahan, Johnny Manziel, and Kate Upton.

In the NBA, there’s no honor quite like having your number retired with the team you poured your blood, sweat, and tears for. The Cleveland Cavaliers awarded this honor to 7 former players, including:

Interestingly enough, the No. 11 was “unretired” in 2018 so that Larry Nance Jr. could honor his father’s legacy with the Cavaliers by sporting the same number.

There are four Cavaliers who have been inducted into the NBA Hall of Fame including Walt Frazier, Shaquille O’Neal, Nate Thurmond, and Lenny Wilkens.

LeBron James is still playing basketball and is currently playing for the LA Lakers; however, he is also a noteworthy Cavalier having played for the team twice from 2003 to 2010 and then again from 2014 to 2018. James is considered to be one of the greatest basketball players of all time. Once he retires, expect the cavaliers to rightfully retire his jersey.

Did any of the Cavaliers’ history surprise you? We’d love to know your thoughts.