The Indiana Pacers were once a standout team in the former American Basketball Association. The team won an impressive 3 championship titles during its time with the league before transitioning over to the NBA with the ABA-NBA merger. They are one of just 2 teams that never changed its name or relocated during its time in the ABA. It’s time to talk about the extensive history of the team forever-known as the Indiana Pacers.

Way back in 1967, a group of wealthy investors in Indiana decided it was time to buy a franchise with the American Basketball Association (ABA) to bring professional basketball to Indiana. The team name, the Pacers, had two inspirations: The history of horse racing in Indiana and the well-known pace car from the Indy 500 race. Despite disagreements about the team’s official location, “Indiana” was eventually added to the team’s name.

The first few years as a team in the ABA was filled with success, advancing to the ABA Finals an astounding 5 times and clinching the title during the 1970, 1972, and 1973 seasons. These achievements were in part due to head coach Bob Leonard as well as professional basketball veterans like Mel Daniels and George McGinnis. Yet, the Pacers’ unrivaled accomplishments in the ABA were eventually moot after the ABA-NBA merger in 1976.

The most successful team in the ABA suddenly had issues with their on-court product and finances. That’s because it cost the franchise over $3 million to join the NBA and lacked ticket sales necessary to remain financially afloat. To further demonstrate the bad luck, the team consistently ended up on the short-end of deals, trading away players that turned out to be standouts and drafting busts.

The early 1980s were loaded with struggle for the once-thriving Indiana Pacer. They were unable to surpass 26 victories in a single season for several years straight. The down-on-their-luck Pacers were able to turn their misery around, drafting Reggie Miller from UCLA in 1987 and Detlef Schrempf in 1989. Schrempf became one of the most important players in the early 1990s, even advancing to the All-Star game.

The 1990s meant drafting players like Reggie Miller and recruiting NBA standout Larry Bird as the team’s head coach. Bird was able to lead the team to an unprecedented 58-24 record, though his position as head coach didn’t last long. The coaching role was eventually handed over to the current Hall of Famer Isiah Thomas during the early 2000s. The Pacers eventually made it to the NBA Finals during the 2000 season, the first time since 1975.

The first logo introduced in 1968 included a hand grasping a yellow basketball. The logo had a thick dark blue outline shaped like the letter “P.”

Between 1977 and 1990, there were only slight changes to the team’s logo. This logo used a much lighter shade of blue, used a gold coloring for the basketball, and added “Indiana Pacers” in all-capital blue lettering in the bottom right corner.

The 1991 season once again brought slight changes to the logo. The team dropped the hand from the logo and instead infused three horizontal stripes in the logo’s interior. “Indiana” was dropped from the logo.

The logo used from 2006 to 2017 had just minor modifications to the previous logo. This one added a grey border to the letter “P,” changed the font used, and opted for a lighter shade of blue.

The logo introduced in 2017 was very different from the logos used in previous years. This one continued the same logo from the previous year in a white circle, surrounded by a gold circle that read “Indiana Pacers” in spaced out letters. 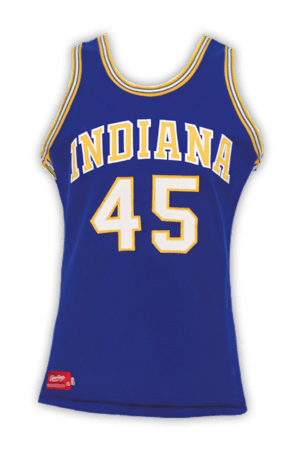 The jersey used in 1976 emphasized the team color of blue. “INDIANA” was added in yellow letters with white borders, the numbers were the opposite, and the same colors were used to border the entire jersey. 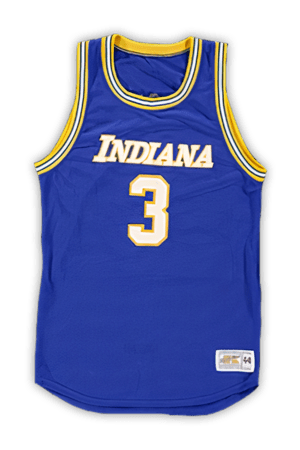 The only changes to the jersey used between the 1981 and 1984 seasons were smaller lettering and consistency among the coloring for the letters and numbers. 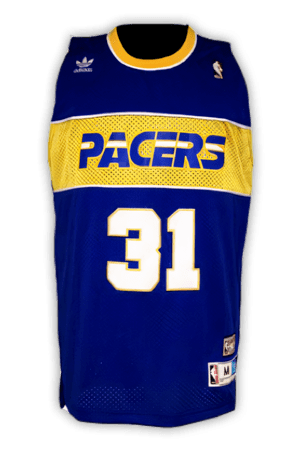 From 1985 to 1990, the Pacers sported a brand new jersey never seen before. This jersey was mostly dark blue with a yellow stripe around the chest portion. The yellow stripe included the name “Pacers” in all capital blue letters. The player’s number was white with yellow borders. 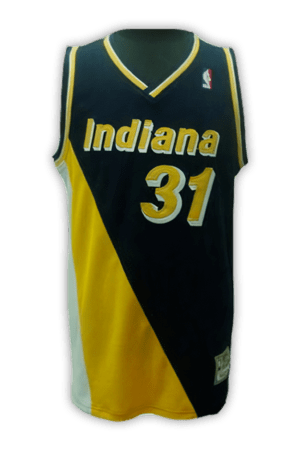 The jersey worn between 1990 and 1997 was mostly black with diagonal lines separating yellow and white coloring. The name “Indiana” was written in yellow font with white borders. 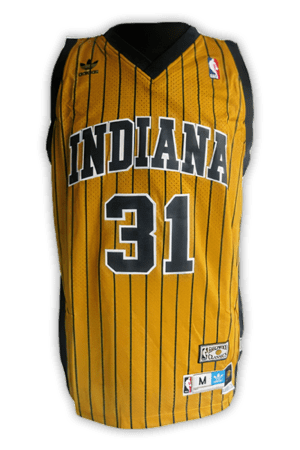 The 1997 jersey offered a brand new design for the Pacers. This jersey was mostly yellow with vertical black pinstripes throughout. “Indiana” was written in black lettering with a white outline. 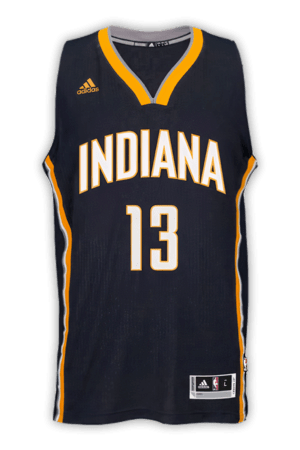 This jersey was mostly black with yellow accents, including “Indiana” in all-capital white lettering with yellow borders. 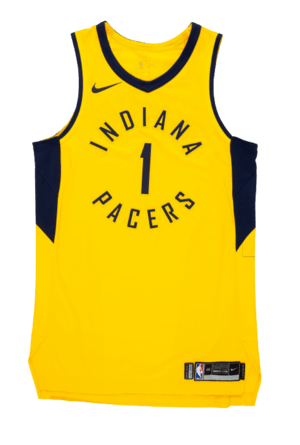 The 2017 jersey for the Pacers was the most modern yet. This jersey was mostly yellow and had “Indiana Pacers” resembling the shape of a circle around the player number. Thick horizontal black stripes were added to the side of the jersey. 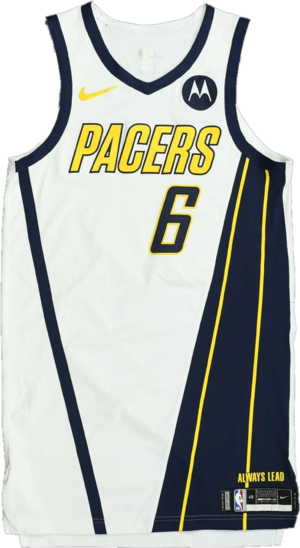 The 2018 Pacers jersey is the most recent. This jersey is mostly white, with “Pacers” in yellow letters at a slight angle. The player number was on one side below the team name, also at an angle. The jersey had blue borders and a large diagonal blue stripe white narrow yellow pinstripes inside. 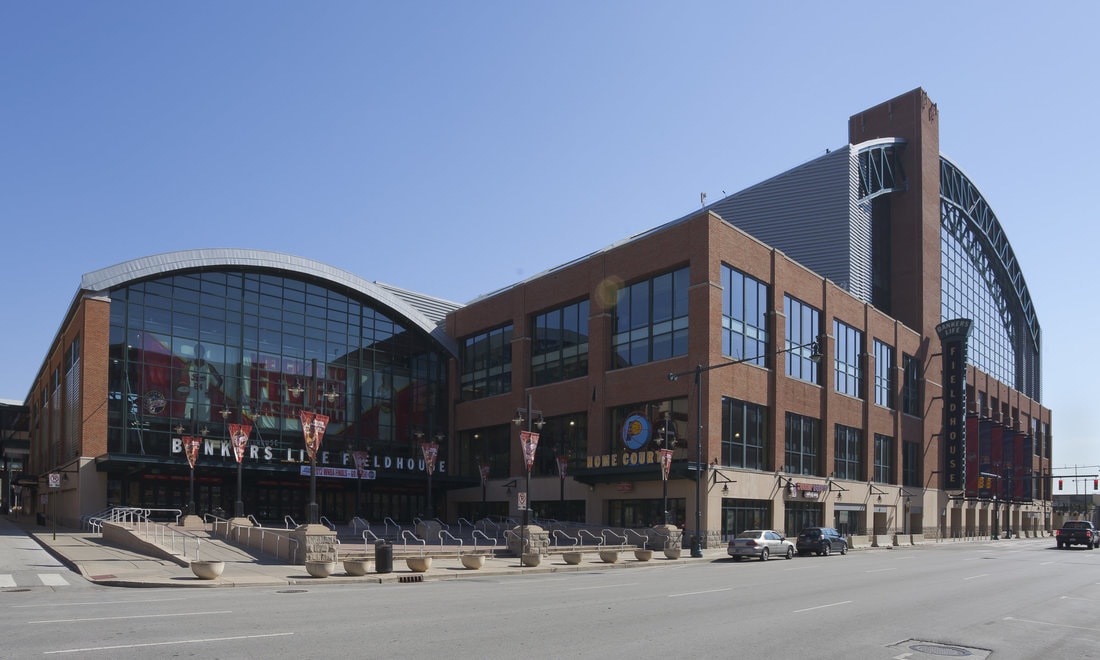 The Indiana Pacers first started out at the Indiana State Fairgrounds between 1967 and 1974. The team eventually moved to the Market Square Arena in 1974 shortly before becoming a franchise with the NBA. The Pacers moved to Bankers Life Fieldhouse in 1999, now their current arena. The current stadium used by the Indiana Pacers is viewed as the best arena in the entire league due to the excellent sightlines.

The Pacers don’t have the biggest following in the celebrity world, but comedian and actor Mike Epps is considered the team’s most well-known celebrity fan.

The Indiana Pacers are a proud NBA team who once had the names Larry Bird and Isiah Thomas grace the starting lineup sheets. Interestingly enough, very few of these standout players were formally recognized by the Pacers. Only 3 former players had their numbers retired on the same day back in 1985 and an additional player number was retired 21 years later in 2006. The 4 retired numbers from former Pacers players include:

Additionally, the Indiana Pacers retired the #529 for Bobby Leonard in 1996. Leonard ran the show out in Indiana for 12 seasons as coach and even spent time on the court as well during his 7 years as a league player.

Not only do the Pacers not have many retired jerseys, they also don’t have much representation in the Basketball Hall of Fame. As of now, the team has just 5 former players earning this title. Former Pacers players who have earned this accolade include Chris Mullin, Alex English, Adrian Dantley, and George McGinnis. It also includes Reggie Miller, who spent an impressive 18 years with the Pacers and averaged 18.2 points per game.

The Indiana Pacers surprisingly had a change of luck in 2004, ending the season with the best record in the NBA at the time (61-21). They have struggled to reach the NBA Finals since their last appearance back in 2000. On a more positive note, the Indiana Pacers made the playoffs 15 times since the turn of the century. Despite a record of uncertainty within the franchise, the future of the Pacers truly looks bright.