The Milwaukee Bucks, native to Wisconsin, have 15 division titles and one NBA Championship to their name. So how did a team from middle-of-nowhere America clinch an NBA title in its third season as a team? Let’s find out everything there is to know about the Milwaukee Bucks from then to now.

When the Milwaukee Hawks left Wisconsin after a four-year stay in 1955, Wisconsin went 13 years without having its own NBA team. That was until Milwaukee Professional Sports and Services, Inc. wanted NBA basketball to formally return to Milwaukee. The team was approved in 1968 and the locals in Wisconsin were given the chance to name the team. After a massive 40,000 entries, many chose the name “Robins” after the Wisconsin state bird.

The “Milwaukee Robins” didn’t stick, leading the team to adopt the name “Milwaukee Bucks” after the deer population in Wisconsin instead. The team’s lack of success during the inaugural 1969 season secured them the first-round draft pick. The addition of a UCLA player by the name of Lew Alcindor turned the team around during the 1969 to 1970 season. Alcindor, later known as Kareem Abdul-Jabbar, helped the team to a 56-26 record, the best in NBA history at the time.

The following season in 1971, the Milwaukee Bucks clinched an all-time record 66-16 season thanks to the addition of players like Oscar Robertson. The 1971 team advanced to the NBA Championship for the first time in franchise history and during its 3rd year as a team. It only took the Bucks 4 games to snatch the championship title away from the Baltimore Bullets. In 1971, 1972, and 1973, the Bucks set an NBA record with 3 straight years of more than 60 wins.

The mid-1970s meant a period of change for the once-thriving Milwaukee Bucks. The team made it to the NBA finals but fell in game 7 against the Boston Celtics. 1975 was even worse for the team after the loss of superstar Kareem Abdul-Jabbar to the Lakers. That same year, the team was sold to a cable television executive by the name of Jim Fitzgerald. In the 1979 to 1980 season, the team earned a division title for the first time after a three-year gap.

The Bucks continued with the post-season trend and saw playoff appearances during 12 straight seasons and won 6 straight division titles until 1986. During that time, the Bucks were once again put on the market and purchased by a senator by the name of Herb Kohl, who was afraid other buyers would lead to the team’s relocation out of Wisconsin (similar to what happened to the Hawks).

The Milwaukee Bucks have gone through a few logos since the team was first created in 1968 in Wisconsin.

The first logo that lasted for 25 years until 1993 had a cartoon-style buck wearing a green sweater and spinning a basketball on its hoof. The deer seemed to be jumping and the logo had “Milwaukee Bucks” written at the bottom in all capital black letters.

The 1994 season brought a brand new logo, consisting of mostly purple and green coloring. This logo had a more realistic-looking green buck in front of an upside-down purple triangle. “Milwaukee Bucks” was written in front of the deer, with “Bucks” being printed larger.

In 2007, the logo was updated once more. This logo was very similar to the previous one that was used, replacing purple coloring with red coloring and changing the font to a more embossed-style of writing.

Since 2015, this is the logo that the team has been sporting. This logo saw an update in the appearance of the buck and infuses a beige circle around the antlers of the buck. There’s white space between the antlers and the name “Milwaukee Bucks” is inside of the bottom of the circle. 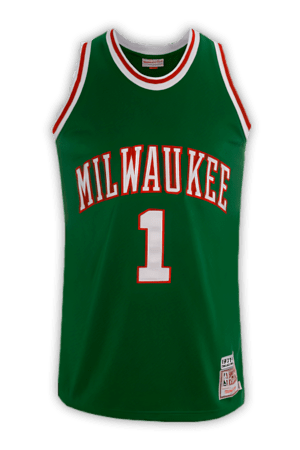 The first jersey was worn until 1973 and was mostly green with white lettering and red borders. The name “Milwaukee” was etched on the front. 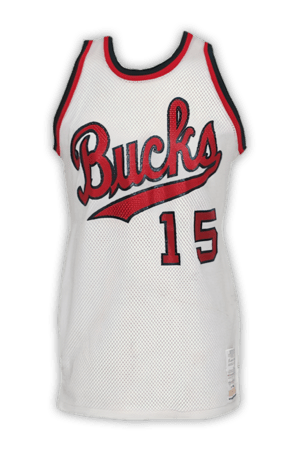 From 1973 to 1976, players rocked a white jersey with red script lettering that said “Bucks.” 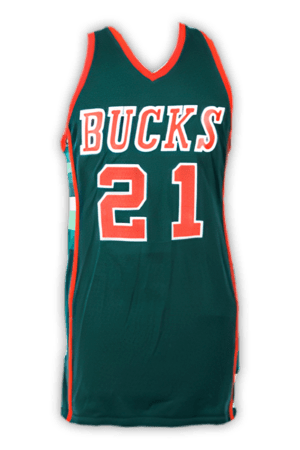 The jersey worn until 1993 returned to a greenish color. The lettering was orange with white borders. 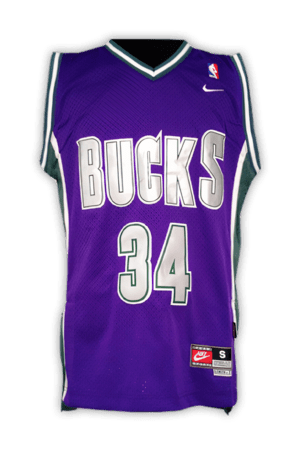 From 1994 to 2006, the Bucks wore purple jerseys for the first time in franchise history. This jersey had white lettering with black bordering on the inside. There were dark green stripes down the sides of the jersey. 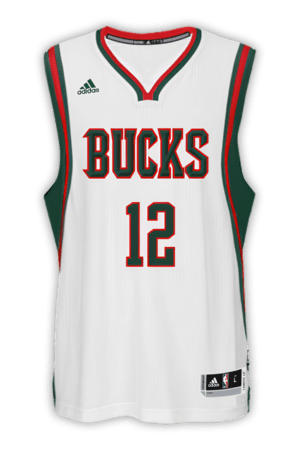 Between 2006 and 2014, the Milwaukee Bucks returned to a white jersey. This jersey had “Bucks” written in dark green with a red outline and a green stripe down both sides. 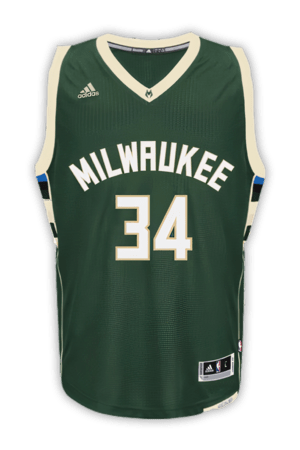 The current jersey was established in 2015 and is mostly green with white lettering reading “Milwaukee.” There are beige accents and borders throughout. 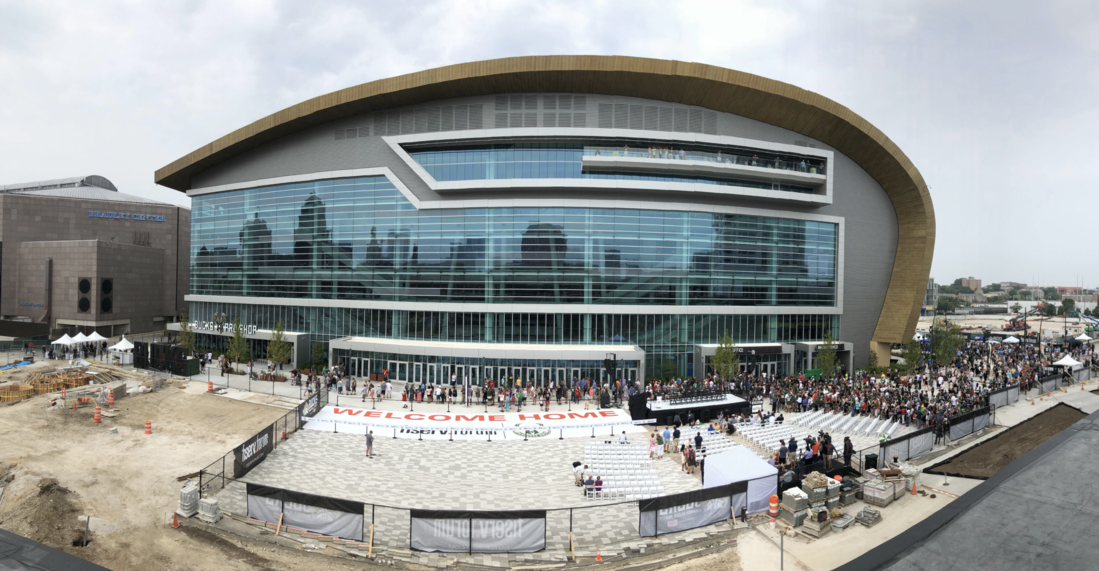 The Milwaukee Bucks have played at three different arenas since the team was created in 1968. They first played at the Milwaukee Arena for 20 years between 1968 and 1988. They then hit the court for 30 years at the Bradley Center from 1988 to 2018. The team now plays at the Fiserv Forum.

Aaron Rodgers, quarterback for the nearby Green Bay Packers, is a proud Bucks fan.

The Milwaukee Bucks excelled on the court from the early 1970s to the early 1990s, snagging 11 division championships during that time period. The accomplishments of many of these players did not go unnoticed, which is why a select few received the greatest honor of all: Having their jersey retired. In the history of the team, the Bucks retired 9 jerseys, including:

In a broader sense, the accomplishments of Bucks players have gone a bit further than franchise recognition. Today, 13 former players from the Milwaukee Bucks have been inducted into the Basketball Hall of Fame. That includes the likes of Ray Allen, Oscar Robertson, and Moses Malone. Perhaps the most well-known is Kareem Abdul-Jabbar who spent 6 years with the team after playing for UCLA. While with the Bucks, Abdul-Jabbar averaged over 30 points per game and was considered an All-Star during all six seasons.

To say that the 2000s have been rough for the Milwaukee Bucks would be an understatement. The 2001 season brought the Bucks to their first division title in 15 seasons, but the team couldn’t prove victorious against the highly-skilled Celtics. The early 2000s were filled with injuries and poor performance on the court.

After two straight years of playoff content, the Milwaukee Bucks finally earned the title of division champion in the 2019 season. That same season also marked the first time the team knocked out 60 or more victorious in a single season since 1981. Regardless of the team’s past, the Bucks seem to be on their way to unheard-of success for the franchise.