The Detroit Pistons might not be the best team in the history of the NBA, but they’re surely a team with a lot of heart. The team has been around since the 1940s and has changed names 3 times and locations 2 times. So how did a team go from making two finals appearances in the NBL to waiting more than 30 years to see the finals in the NBA? To really understand, you need to learn about the history of the team now known as the Detroit Pistons.

The modern-day Detroit Pistons were once known as the Fort Wayne Zollner Pistons as far back as 1941, based out of Indiana. A member of the National Basketball League, the Pistons were once headed by an automobile factory owner Fred Zollner. The team name came from the name of an integral part of the engine known as the piston.

In the Pistons’ first few years as a team, they were able to lock down league championships in both 1944 and 1945. The team eventually changed its name to just the Fort Wayne Pistons in 1948, a change made with the team’s entrance into the Basketball Association of America (BAA). Despite years of struggle, the Pistons eventually made it to the NBA Finals in the 1955 and 1956 seasons, though not proving successful in either endeavor.

The Fort Wayne Pistons had a rather large fan following, though the team clearly struggled on the court. In 1957, Zollner eventually agreed to move the team to Detroit, a city hungry for its own basketball team after 10 vacant years. The team didn’t even have to change its name, as Detroit was also a leader in the automotive industry in the 1950s. In the team’s first year in Detroit, standout George Yardley was able to net more than 2,000 points in a single season.

The early 1970s brought change, specifically in terms of the team’s ownership. The team was sold to Bill Davidson, a man who would go on to own the team for over 3 decades. By the 1980s, the Pistons were intent on winning championships, adding players like Isiah Thomas, Dennis Rodman, and Adrian Dantley to the team roster.

By 1988, the Pistons saw 3 consecutive NBA Finals appearances between the Lakers in 1989 and the Trail Blazers in 1990. Despite the sheer amount of success during the 1990 season, the Pistons were unable to make it to the NBA Finals to defend their title in 1991. They made a splash by drafting Grant Hill in 1994 and an entire shift in management during the 1990s.

The Detroit Pistons have gone through quite a few logos as a professional basketball team.

The logo used from 1972 to 1975 dropped the “National Basketball Assn.” from the previous team logo.

The 1976 season called for a brand new logo. The formerly hollow red letters were replaced with thick gold letters. “Detroit Pistons NBA” could be seen in a large gold font in the center of the outline of the basketball.

From 1980 to 1996, the logo took a drastic turn. The outline of the basketball turned into a red and white basketball surrounded by a blue circle. “Detroit Pistons” could be seen typed in white lettering in the center of the logo.

The 2006 season for the Pistons meant a reemergence of the logo from 1996. This logo had a red basketball with white lines as well as a blue outline. “Detroit Pistons” was written in front of the basketball in white letters surrounded by a blue border.

The current logo was established in 2017 and consists of a minor redesign of the previous logo. Fewer lines are seen on the basketball and a brand new font is utilized. 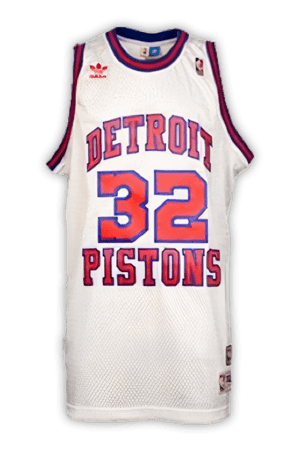 The move to Detroit in 1957 brought a brand new jersey for the Pistons, this one being mostly white. The first jersey included “Detroit Pistons” written in large red letters with a blue outline surrounding the player’s number. 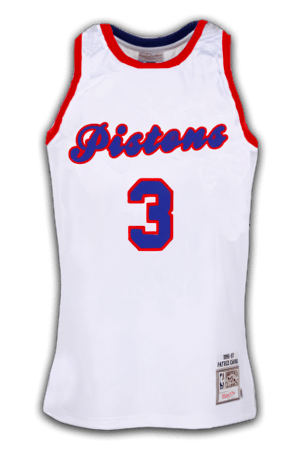 From 1962 to 1969, the Detroit Pistons saw a drastic change in their jersey. Instead, they wore an all-white jersey with “Pistons” written in cursive blue lettering on the front with a red outline. 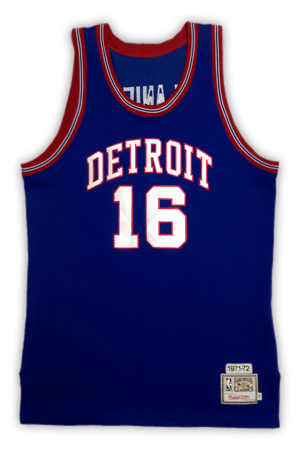 From 1969 to 1974, Pistons players wore a mostly blue jersey with white letters spelling out “Detroit” surrounded by a thin red outline. 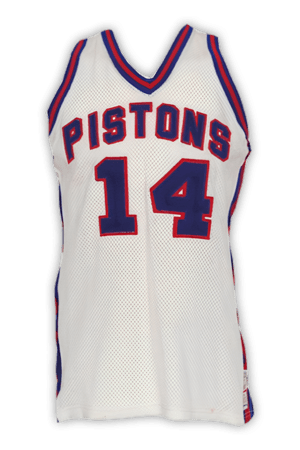 The seasons between 1974 to 1978 meant a return to a mostly white jersey. This jersey read “Pistons” in blue lettering that boasted a red border. 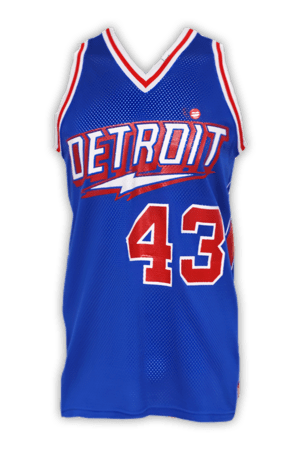 Between 1978 and 1981, the Pistons wore a blue jersey that spelled out “Detroit” in white letters and a red border. A lightning bolt could be seen used as an underline beneath the city name 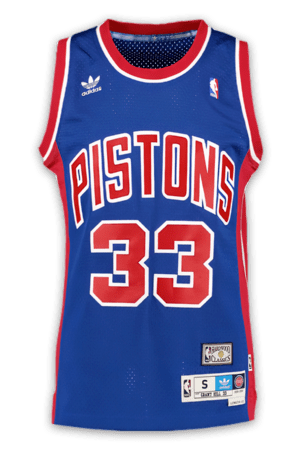 Between 1981 and 1996, the Pistons returned to including “Pistons” on the front of their jerseys. This was written in large red letters with thick white borders. 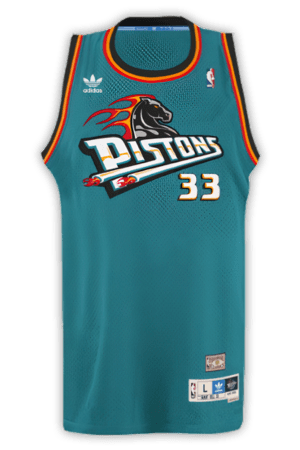 The 1996 season brought an introduction to the color teal. This jersey included the logo at the time, which boasted a horse on fire and a stylized “Pistons” on the front. 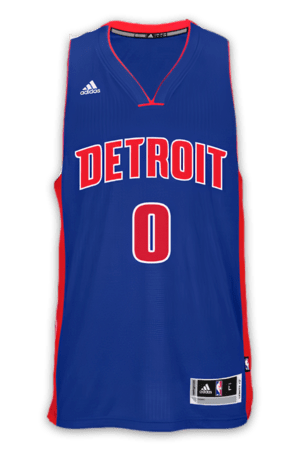 The jersey that has been worn since 2001 is mostly blue. The name “Detroit” can be seen in red letters on the front, surrounded by a narrow white border. The updated NIke version is nearly identical to this classic jersey. 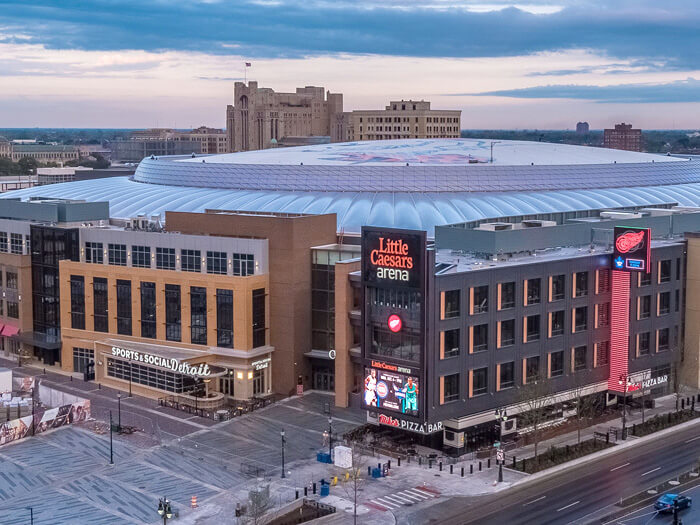 The Detroit Pistons have seen their fair share of arenas since the team was formally established back in the late 1940s. They played at the North Side High School Gym until 1952, when they moved to the Allen County War Memorial Coliseum until 1957. The team alternated between The Olympia Stadium and the Memorial Building at the University of Detroit between 1957 and 1961. The Pistons called Cobo Arena “home” from 1968 until they officially moved to the Pontiac Silverdome in 1988. Since then, the Detroit Pistons have hit the court at the Palace of Auburn Hills until 2017 and now the Little Caesars Arena.

If you ever make it to a Pistons game, don’t be surprised if you lock eyes with a celebrity enjoying the game as well. Kid Rock and Eminem are considered the two most famous Pistons fans, and they also happen to hail from Michigan themselves.

The Detroit Pistons are a team with a lengthy history and lineups that were hard to match during their prime. The team went on to retire 10 jersey numbers to honor the players who once sported those jerseys so proudly for the Pistons. The following players had their numbers retired by the Pistons:

The Pistons also retired the #2 in honor of Chuck Daly, who spent 9 years at the helm guiding the Pistons to 9 straight playoff appearances and 2 NBA Championships. Additionally, former team owner Bill Davidson and former general manager Jack McCloskey were honored with their own banners at Little Caesars Arena.

Despite only having 2 championships as a team, the Detroit Pistons also have 20 players in the Basketball Hall of Fame. These players include Isiah Thomas, who spent 13 seasons with the Pistons and averaged 19.2 points and 9.3 assists per game. This list also includes 7-year Pistons veteran Dennis Rodman, a 2-time Defensive Player of the Year, and Bob Lanier, who spent 10 seasons with the team and was nominated as an All-Star 7 times.

Since the early 2000s, the Pistons have been relatively inconsistent with their success as an NBA team. The team has only advanced to the playoffs 3 times since the impressive 8-year playoffs streak. They haven’t won a conference championship since 2008.