The team now known as the LA Clippers has been down on its luck ever since they were first formed back in 1970 in Buffalo. Sometimes referred to as “Clipper Triangle,” the team has a marked history of career-ending injuries, trade deal flops, and draft busts.

In 1970, the Buffalo Braves became one of the newest NBA teams added in the league’s expansion. Yet, despite the leadership of skilled head coach Jack Ramsey and player Bob McAdoo, the team couldn’t surpass 22 wins in the first 3 seasons. Fortunately, McAdoo, a future league MVP, helped the Buffalo Braves qualify for playoff appearances every season between 1974 and 1976.

The Buffalo Braves struggled to see court time back in Buffalo, competing for space with the men’s basketball team from Canisius College. This stroke of bad luck continued after the team was sold to John Y. Brown Jr., who effectively cleared the team roster and sent fan attendance to an all-time low. Thankfully, the owner of the Boston Celtics, Irv Levin, helped the Braves relocate to the San Diego, California area.

The change in location led the team to a brand new name as well. “Clippers” was chosen as the name due to the presence of a style of ship commonly seen in the local San Diego Bay. The move to San Diego brought on World B. Free, known for netting close to 29 points per game, and Bill Walton. However, Walton’s playing time with the Clippers was severely limited due to persistent injuries that left him sidelined.

In 1982, the team was sold to Donald Sterling in a $12.5 million deal, though the team recorded nearly 20 fewer wins than in the previous season, ending with a 17-65 record. While in San Diego, the Clippers again hit a stream of bad luck, unable to clinch a winning record and struggling to bring fans out to attend home games. 1984 brought another relocation, this time to Los Angeles without the consent of the league. This landed Sterling in hot water, facing a $25 million lawsuit for the unauthorized move.

Once in Los Angeles, the Clippers developed a trend: Acquiring veteran players that soon injured themselves after joining the team. This unfortunate trend led the team’s record to tank, finishing the 1987 season with one of the worst records in all of NBA history, 12-70. Yet, the addition of head coach Larry Brown was a game-changer for the struggling Clippers, who finally finished with a .500 record for the first time in over a decade and advanced to the playoffs for the first time in nearly 2 decades.

From 1985 to 2010, the Clippers simply updated the logo to reflect the team’s new location, adding “Los Angeles” to the logo.

The 2011 logo used darker shades of red and blue and realigned the basketball lines.

The current logo was introduced back in 2015. “Clippers” can be seen in large black letters at the center of the logo. The top of the logo includes an outline of a basketball in black with “LAC” typed inside the basketball. 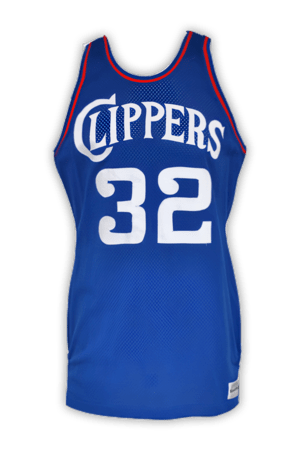 The first jersey was used beginning in 1984 and was mostly blue. “Clippers” was written in white letters with the letter “C” being much larger than the others. 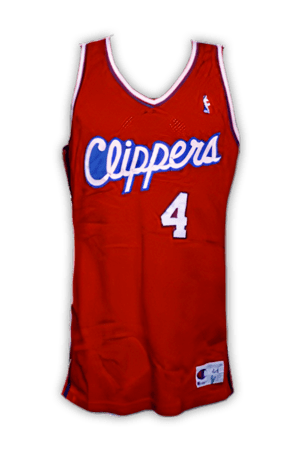 From 1987 to 2000, the Clippers rocked a mostly red jersey. “Clippers” was written in cursive white letters with a blue outline. 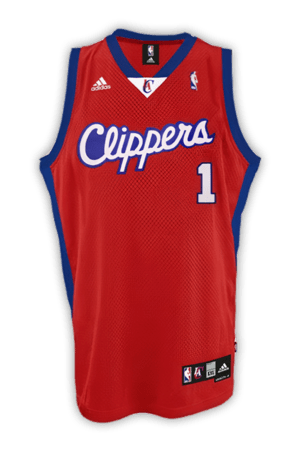 The only change to the jersey used between 2000 and 2010 was the use of a darker blue and blue accents along the side of the jersey. 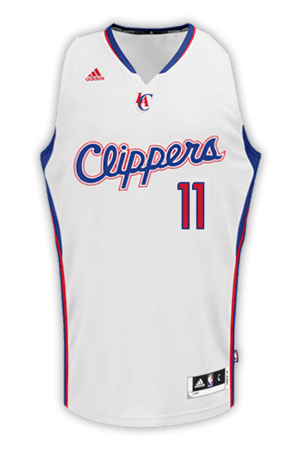 The 2010 season brought a jersey that was mostly white, using the same font from previous Clippers jerseys. This time, the font was blue with red outlines while the player’s number was the opposite. 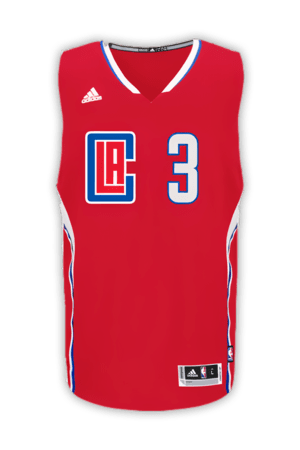 By 2015, the Clippers adopted a mostly red jersey. This jersey had the “LAC” logo on one side with the large player number on the opposite side in large white font. 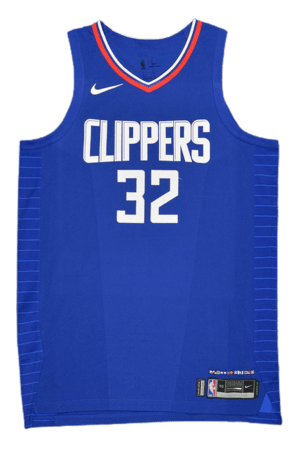 The most recent jersey was added in 2017. This jersey is more modern, with a nice blue color taking up the majority of the jersey. “Clippers” is in all capital white letters in the center with an equally-sized player number just below. The only color other than blue and white on this jersey is the color red, which can be seen around the V of the jersey’s neck. 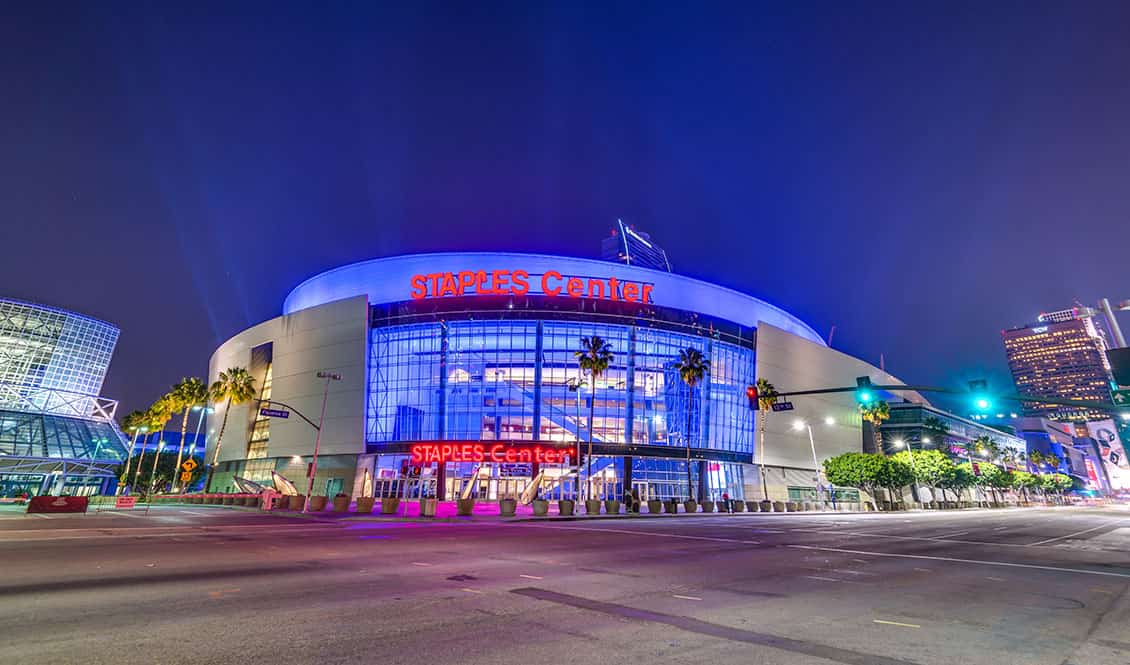 While in Buffalo, the Braves played at the Buffalo Memorial Auditorium, though the team slipped in a few games at the Maple Leaf Gardens every now and then. The move to San Diego brought a new home arena, with the Clippers playing at the San Diego Sports Arena from 1978 to 1984. The sudden relocation to Los Angeles in 1984 sent the Clippers to the Los Angeles Memorial Sports Arena until 1999 and then the Staples Center. The Clippers have proudly played at the Staples Center in Los Angeles since 1999, though there are talks about relocating to a brand new arena in Inglewood beginning in 2024.

The fact that the Clippers play out of Los Angeles has led the team to adopt several celebrity fans over the years. Celebrities like Billy Crystal and Rihanna have been spotted courtside at Clippers home games in the past.

The Los Angeles Clippers have definitely had quite a few big-name stars hit the court in their name, but the team has largely struggled since its early years in the 1970s. As of now, the Clippers are one of a few NBA teams that have not yet retired any numbers. The reason behind this is probably the fact that very few players on the Clippers roster stuck around for more than a season or two at a time.

Luckily, the Los Angeles Clippers do boast 7 former players in the Basketball Hall of Fame, though most of these players only put in a single season with the team. The players on the list include Bob McAdoo, the first standout star on the Buffalo Braves who averaged 28.2 points per game, and Bill Walton, a 4-year veteran with the team.

At the turn of the century, there were talks to force yet another relocation, this time to Anaheim, California. This idea came from the increased ticket sales when the Clippers occasionally played in Anaheim, though this $95 million plan was rejected by Sterling. Despite sharing the Staples Center with the highly popular Kings and Lakers at some point, the Clippers were eventually able to secure a loyal fan base that consistently sold out their home arena.

In recent years, the team has won tons of games, but that hasn’t translated to a championship. Despite the addition of players like Blake Griffin in 2009 and Chris Paul in 2011, the team hasn’t done anything miraculous. The most notable achievement by the Clippers would have to be the first-ever division championship in 2013, with the Clippers able to secure that same title again in the 2014 postseason.

With Kawhi Leonard and Paul George in town, the Clippers have their best chance at winning a title in the near future.