The team you know now as the Sacramento Kings has quite a vibrant history as a team, dating as far back as 1923. In the 97 years since the original team was established, the Sacramento Kings have been known by eight different names and have played for four different cities in the United States. Now let’s go over everything you didn’t know about the Kings, including the team’s complete history, previous home arenas, and the jerseys and logos used over the years.

In 1945, the team coached by Lester Harrison was eventually purchased by Harrison and his brother for a mere $25,000 to become a part of the National Basketball League. The team developed a unique strategy and recruited players returning home from World War II in 1945. Just a few short years later, the Rochester Royals would become an official team in the NBA.

In its first few years in the league, the Royals typically found themselves in the playoffs and even proved victorious against the New York Knicks in the 1951 NBA Finals. The team was then taken over by a 5-time all-star player by the name of Bobby Wanzer in 1955. Shortly after, the team would be encouraged to relocate out of Rochester.

The team formerly known as the Rochester Royals would then be known as the Cincinnati Royals after relocating to Ohio in 1957. During the team’s 15 years in Cincinnati, players like Maurice Strokes, Clyde Lovellette, and George King would eventually join the squad. 1960 saw the entrance of future Hall of Famer and leading scorer in the entire NBA, Oscar Robertson.

The Royals were eventually sold to wealthy businessmen by the names of Jeremy and Max Jacobs back in 1966. Yet, the team would again relocate to Kansas City in 1972, officially changing its name to the Kings. Only 13 years later in 1985, the Kings would finally settle down in Sacramento, where it would take another 11 years to finally qualify for a playoff.

With a team constantly transitioning from one city to another while also changing its name, it’s no surprise that the team has gone through its fair share of logos too.

When the Kings moved to the Sacramento area around 1986, the logo remained the same, yet used more pink coloring in the crown portion of the logo and added “Sacramento” to the top.

Between 1995 and 2016, the team used a brand new logo. This logo included the entire team name as well as a basketball and a crown infused in the mostly blue and grey design.

The 2016 logo paid homage to the original Kings logos back from 1972. The current logo is purple and grey rather than blue and red and actually includes “Sacramento” inside the crown rather than on top. 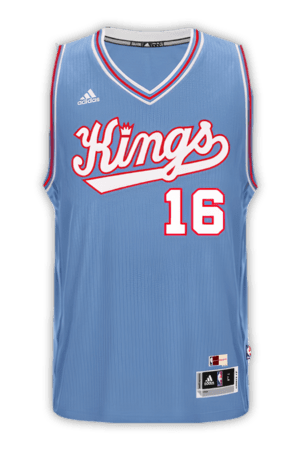 The first jersey connected to the Kings in Sacramento was established in 1985 and used a pale blue color with “Kings” written in a white script and all lettering outlined in a red border. 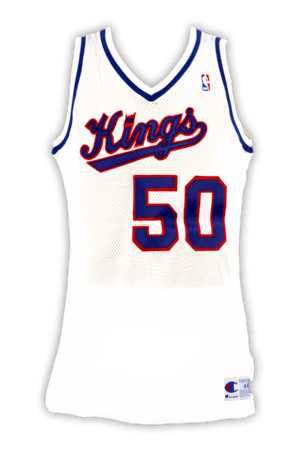 Between 1986 and 1994, the jersey essentially inverted the coloring of the original jersey, this time with a dark blue script and a white jersey. 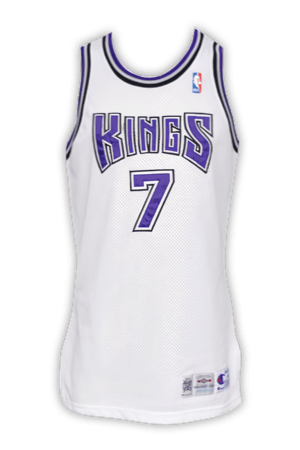 In 1994, the jersey again changed, remaining mostly white, but using a neater all capital blue font for the team name and number 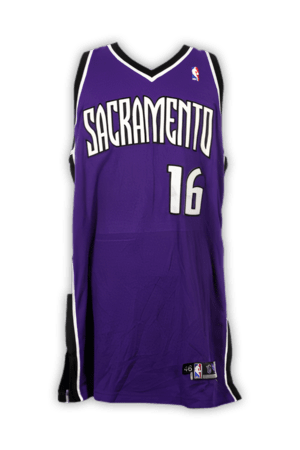 The team switched to a dark purple jersey between 2002 and 2008, using a white “Sacramento” on the jersey rather than the typical “Kings” that has been used thus far. 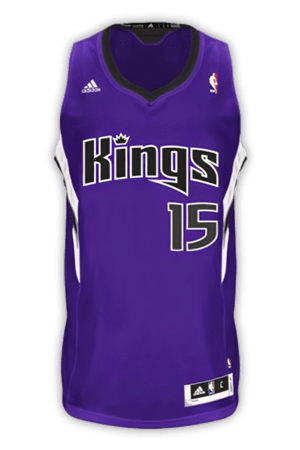 The team jersey remained purple with a change in design in 2008, returning to a jersey labeled with “Kings,” using a brand new font, and printing lettering in black instead of the previous white. 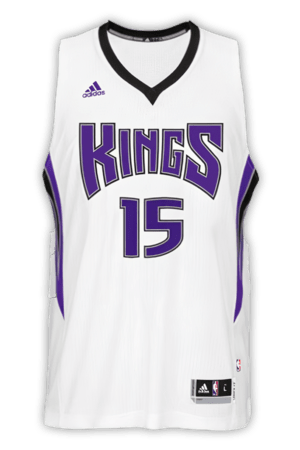 The 2014 to 2016 Kings jersey used a much easier to read font on an all-white jersey with purple lettering all around. 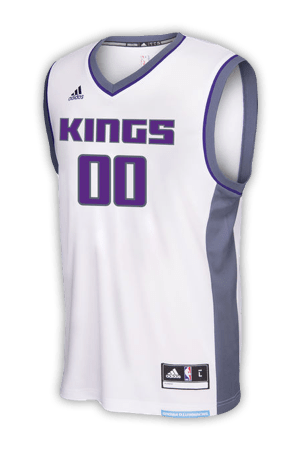 The most recent jersey for the kings was created in 2016 and is mostly white with purple lettering and a grey vertical stripe down the side.

The Sacramento Kings have played in nine different stadiums since the team first played in the NBA in 1949. The Rochester Royals played at the Edgerton Park Arena and Rochester War Memorial while in Rochester, New York between 1948 and 1957. When the team landed in Cincinnati, Ohio, the Cincinnati Royals played at Cincinnati Gardens until 1972. While in Kansas City, Missouri until 1985, the Kansas City Kings spent time at the Omaha Civic Auditorium, Kansas City Municipal Auditorium, and the Kemper Arena. The Sacramento Kings tried out the ARCO Arena I and the Sleep Train Arena before officially claiming the Golden 1 Center as its own.

It’s quite surprising that a team based out of Sacramento, California has so few recognized celebrity fans. Kevin Johnson, a former NBA player and a past mayor of Sacramento, is considered the most famous fan of the franchise.

When you step foot into the Golden 1 Center to scope out a Kings’ game, you’ll be greeted with 11 retired jerseys hanging from the arena’s rafters. These numbers, worn by some of the greatest stars in the franchise, belong to:

The final retired jersey is #6 and it may actually be in your honor. That’s because, like a few other teams in the league, the Sacramento Kings have retired this number in honor of dedicated fans that helped the franchise to grow into what it is today. The No. 6 stands for the “sixth man.”

Being one of the first professional basketball teams in history, it’s no surprise that the Sacramento Kings have 16 players in the Basketball Hall of Fame. That includes Oscar Robertson, who spent 10 years and 750+ games with the Kings, netting over 29 points per game on average. Robertson also went on to play in the 1960 Olympic Games, earning a gold medal as a forward.

Since the then-Rochester Royals clinched conference and championship wins back in 1951, the team has only won three division titles (1979, 2002, 2003). The team experienced a brief success period between 1998 and 2006, seeing the court during the playoffs in 8 straight seasons. Unfortunately, the team doesn’t usually claim a winning record and has hardly come close to its position as the best team in the NBA in the 2001 to 2002 season.