Though not the most popular team in the NBA, the Phoenix Suns have had quite a run in their first 52 years as a professional team. The team has seen the court during the playoffs an impressive 29 times and has advanced to the NBA Finals twice. You’re about to learn everything you could possibly know about the Phoenix Suns, including how the team got to where it is today and the changes that have occurred during the years.

The Phoenix Suns were the only professional sports team based out of Arizona for nearly 20 years until the Arizona Cardinals showed up and claimed their stake. The team was first established in 1968 after several local businessmen joined forces and purchased an NBA franchise for a staggering $2 million. Yet, a team located in Phoenix wasn’t expected to draw a crowd due to poor location.

The Suns earned their name with the assistance of the locals, who chose the name “Suns” out of many desert-related name options (like the Scorpions and the Tumbleweeds). The first few years as a professional team led by General Manager Jerry Colangelo was filled with struggle. The Suns were unable to clinch even the most simple wins, ending the season with a depression 16-66 record and not even coming close to a spot in the playoffs.

The Phoenix Suns drafted players like Gail Goodrich and Dick Van Arsdale, who would become All-Stars and lead the team to future success. By the 1976 season, the Phoenix Suns finally reached the playoffs after loading the roster with the likes of Ricky Sobers and Alvan Adams. Despite having a record barely above .500, the Suns secured a victory over the Golden State Warriors and made it to the finals.

The 1976 NBA Finals between the Boston Celtics and the Phoenix Suns was filled with drama, with the fifth game of the series going into triple overtime due to an overload of fouls. The Suns would eventually fall to the Celtics in the series. Yet, the success of the team would take several devastating blows after locking down 8 consecutive playoff appearances. That was when several players were arrested during a drug scandal and another player died in a plane crash.

In a desperate attempt to recover the formerly successful team, the Suns acquired veteran players like Kevin Johnson and Mark West. The team turned its unimpressive years into success, lacing up their shoes for 13 straight playoff appearances since 1988. The addition of players like Charles Barkley in 1992, an 11-time NBA All-Star, would lead the team to only lose a stunning 68 games between 1992 and 1995.

The logo of the Phoenix Suns has consistently changed over the years but seems to be relatively consistent in the design.

Between 1968 and 1992, the Suns boasted an orange, gold, and purple logo. The logo includes the name “Phoenix Suns” and appears to infuse a basketball with sun rays.

From 1993 and 2000, the Suns logo was a slightly revamped version of the last, this time moving the location of the team name, shifting toward a more blue color, and making it appear as if the basketball is in motion.

The logo between 2001 and 2013 added a more 3D-style to the previous logo and included a grey border.

The current logo for the Suns was created in 2014 and replaced the background with a black one and now uses embossed lettering for the word “Suns.” 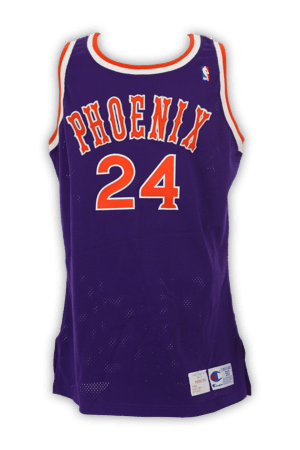 The jersey for the Suns between 1968 and 1992 was mostly purple with orange lettering and white borders. The name on the front of the jersey is “Phoenix.” 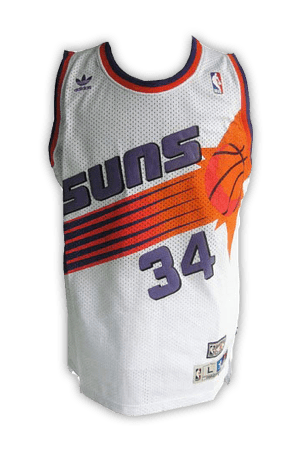 The new jersey that lasted until 2000 was a mostly white uniform with grey lettering for the word “Suns” and an infusion of the shooting basketball logo in the center of the jersey. 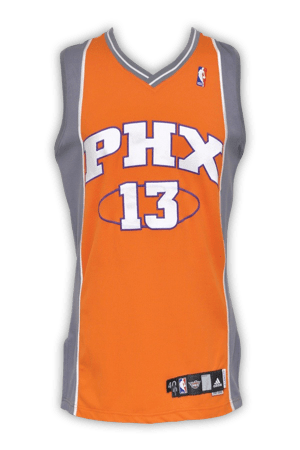 From 2000 to 2013, Suns athletes sported orange jerseys with grey vertical stripes along the sides. The logo added white lettering and replaced “Suns” with “PHX.” 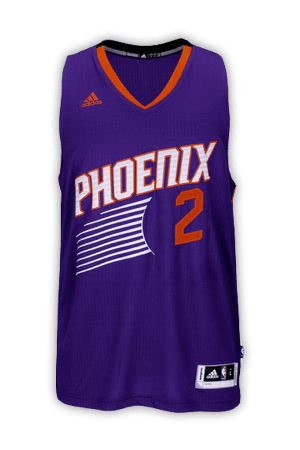 The current jersey was established in 2013 and is purple. It has white lettering with orange borders and includes a few white stripes in the center of the jersey. 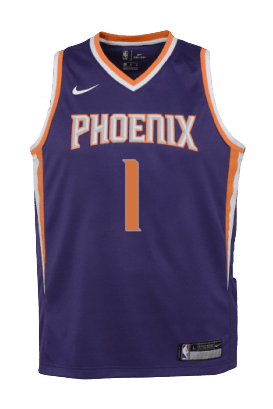 The 2018 season meant a modern and the most recent update to the Suns jersey. This Nike jersey uses the purple color scheme with the Phoenix capitalized and orange lettering. 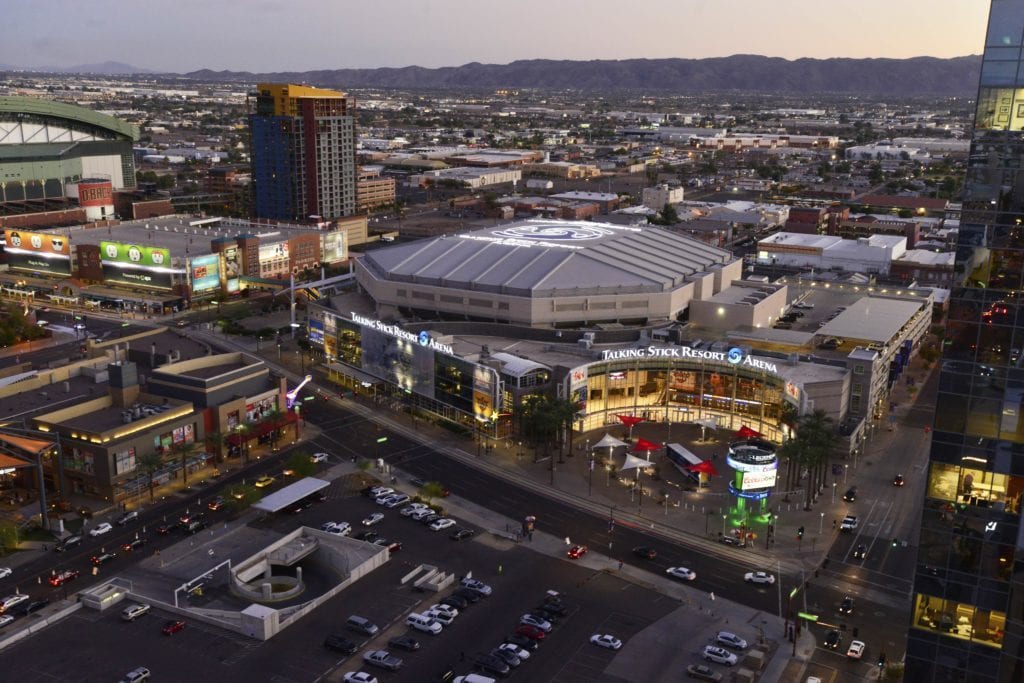 The Phoenix Suns have been relatively consistent in where they play. Between 1968 and 1992 the team made itself at home in the Arizona Veterans Memorial Coliseum. 1992 brought a new logo, a new jersey, and a brand new stadium. The Phoenix Suns have played at the Talking Stick Resort Arena, also known as the Purple Palace.

The Phoenix Suns have played in front of several celebrities over the years. Yet, the most famous Suns fans to date are former NBA standout Charles Barkley and world-renowned championship golfer Phil Mickelson.

For a team with so many appearances in playoffs and title matchups, it’s no surprise that there are so many former Phoenix Suns players that have solidified their place in the team’s history. Today, there are currently six numbers that’ll never be worn on a Suns jersey again, including:

On a few occasions, the Phoenix Suns have decided to award previous superstars with a place in the “Ring of Honor.” This coveted honor is unique to this franchise and comes with formal recognition at Talking Stick Resort Arena. Unfortunately, such an accomplishment doesn’t necessarily retire the number of those who receive this title. Ring of Honor members include Dan Majerle (No. 9), Steve Nash (No. 13), Tom Chambers (No. 24), and Charles Barkley (No. 34).

There are also currently nine former players from the Suns in the Basketball Hall of Fame, including 10-time NBA All-Star Jason Kidd and global superstar Shaquille O’Neal. Steve Nash is one of the most notable players of the franchise, also responsible for turning the team around upon his return in 2004.

In 2004, the Phoenix Suns experienced a great shift in playing style thanks to the addition of Steve Nash to their roster. The team boasted an impressive 62-20 record, which ended up being the best performance by the team since the 1993 season. Nash and the rest of the roster successfully dug the Phoenix Suns out of a seemingly endless slump. Despite the success in the early 2000s, the team’s success began slowing down drastically.

The team has not qualified for the playoffs since 2010 and eventually lost one of its star players, Steve Nash, to the Lakers in 2012. Though the team eventually became one of the first few in NBA history to record over 2,000 wins, the Suns have recently been in a slump where they struggle to win even ⅓ of their games. The team has had 29 appearances in the playoffs but has yet to take home an NBA Championship.