The Denver Nuggets are an NBA Franchise who play as part of the Western Conference and are based in Denver, Colorado.

In 1967, the Denver Rockets were one of the first teams to play in the American Basketball Association. The team was founded by Donal Ringsby, who paid $250,000 to purchase a failed Denver basketball team by the name of the Denver Larks. The Rockets were a great team and held winning records for their first three seasons.

In 1972, Frank Goldberg and Bud Fischer bought the Denver Rockets franchise for $1 million and then sold it for another $1 million in 1975 to Carl Scheer.

In 1974, the ABA joined forces with the NBA and there was already another NBA franchise called the Houston Rockets which led the Denver Rockets to change their name to Denver Nuggets. The Nuggets’ name was inspired by the mining surge in Colorado at the time. Again, the Nuggets had an amazing season and made it to the finals only to be defeated by the Portland Trail Blazers.

In 1980, the Nuggets drafted Alex English who became an all-time lead scorer for the Nuggets. While the Nuggets were consistently making it to the finals, they had yet to win a title.

In 1985, McCombs sold the team to Sidney L. Schlanker for $20 million. Game wise, the 1980s and 1990s both saw their fair share of losses for the Nuggets and then in 2003, they drafted Carmelo Anthony to join the team.

In 1989, the Nuggets’ search for a consistent owner was briefly paused when Comsat Video Enterprises purchased a majority stake of the franchise. In 2000, the team was sold again to Stan Kroenke of the Walmart family for a price tag of $450 million.

Anthony’s addition to the team brought on a 26-win improvement from the previous season, and an eight-year playoff streak. In 2008, Chauncey Billups joined the Nuggets, forming a potent duo with Anthony. In 2011, both Anthony and Billups were traded to the New York Knicks.

From 2012 to 2013, the Nuggets brought on a few new teammates that helped the team win a franchise-record of 57 wins in one season (out of 82). However, true to Nuggets fashion, the team made it to the playoffs only to be defeated.

From 1976 to 1981, the Denver Nuggets logo featured the same miner with a red beard and a blue jersey holding a small basketball in his hand. The key difference between this logo and the former logo was the removal of the outer circle and a transition to new red and blue font below Maxie the Miner.

From 1982 to 1993 the Denver Nuggets logo featured a rainbow skyline within a rainbow dome with white mountains between.

1993 to 2002 brought on another new logo for the Nuggets, this time with a snow capped mountain and the team’s name. The logo was very simple in comparison to the team’s previous logos.

In 2003 the Denver Nuggets’ logo received a color update from dark blue to light blue and yellow. Again in 2004, the team went from a light blue to royal blue while all the while, the logo itself remained the same.

In 2009, a few minor aspects were changed on the Nuggets logo, most of which included using darker shades of yellow, blue, and grey.

In 2018, the Nuggets went back to their mining roots and featured two chisels, a basketball, and a snow capped mountain all in the same logo. The logo is classy and succinct while also incorporating a lot of the team’s history. 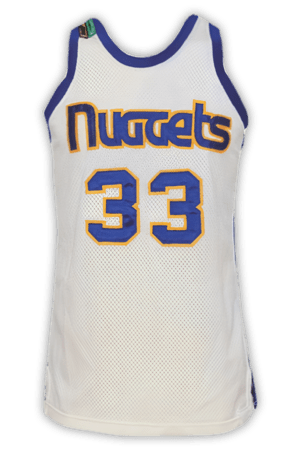 The first official Nuggets jersey debuted in 1976 and was quite simple. The jersey was mostly white with blue lettering spelling out “Nuggets” sporting the brand new Nuggets font that was also seen on the logo. Both the player number and “Nuggets” were outlined in gold. 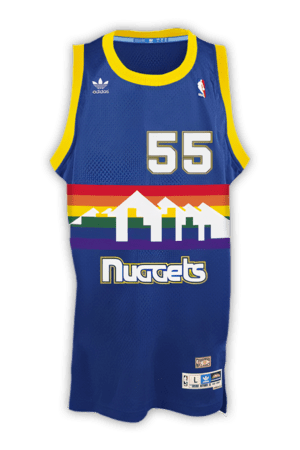 Like the last jersey, the new jersey in 1982 followed the theme of the new logo. This jersey was blue, boasted the silhouettes of white homes and mountains in the center, and had a rainbow design lying horizontally. “Nuggets” was scrawled in white just below the rainbow in the same font as the previous jersey, only adopting a white color and yellow border this time around. The player number was on the top corner of the jersey with the same stylings as “Nuggets.” 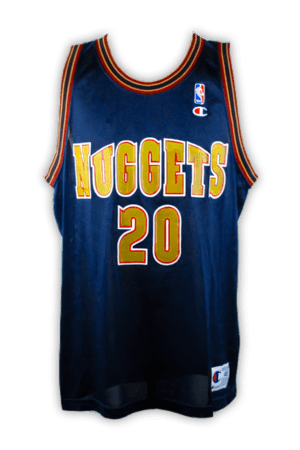 The Nuggets jersey from 1993 was dark blue, a new theme for the team normally wearing a lighter shade of blue. “Nuggets” was written in large all-capital gold font with white and red bordering and a large player number was added below. The jersey boasted red, yellow, and black accents along the arm holes. 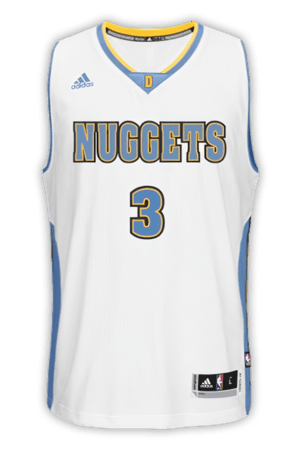 The jersey worn in 2003 was simple. It was white, with “NUGGETS” in light blue paired with yellow and black borders. The same effect was used on the small player number below and a light blue vertical stripe was added on both sides of the jersey. 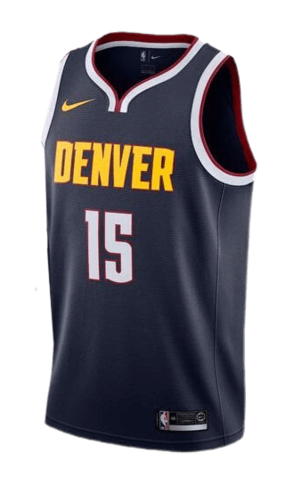 The most recent Denver jersey was brought on in 2018. The major difference was that this jersey was black, had “DENVER” in bright yellow font with red borders, and the player number in white. The neck and arm holes had a thick white border. 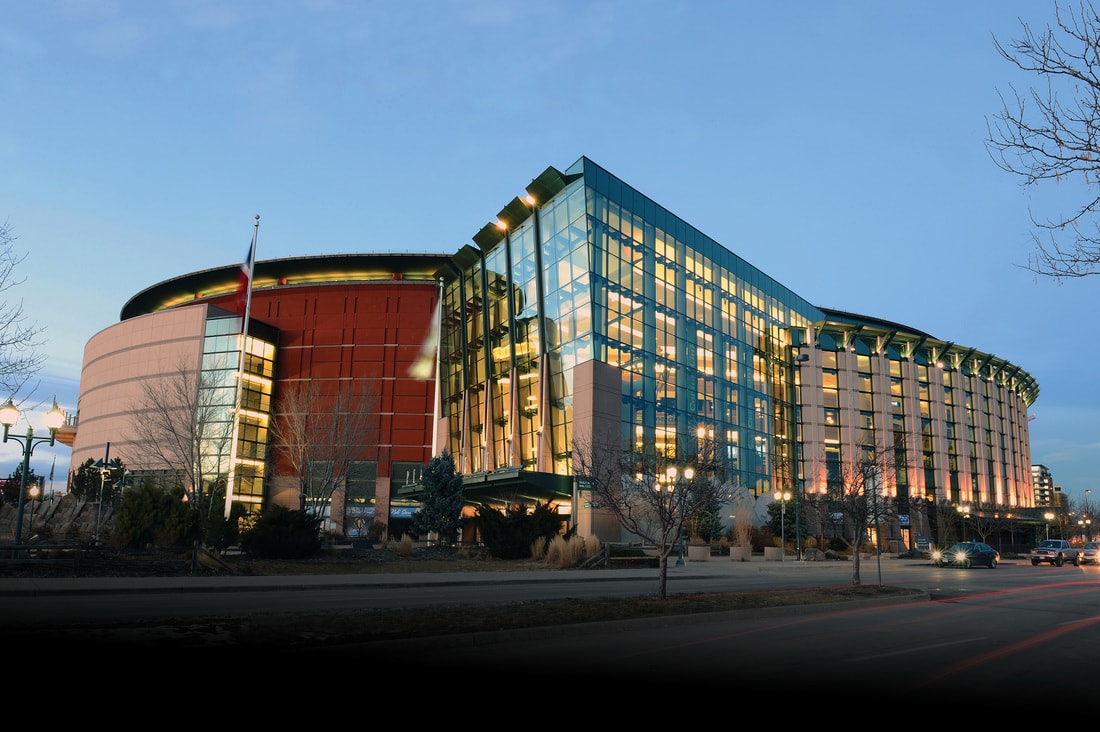 In 1999, a new arena was completed in Denver that was meant to replace the McNichols Sports Arena as the sports home for Denver’s teams. The McNichols Sports Arena was demolished in 2000 after the Pepsi Center opened in 1999. The Pepsi Center not only accommodates sports teams, but it also is the go-to concert venue in Denver. The Denver Nuggets still play there today.

There aren’t many known famous fans of the Denver Nuggets; however, the creators of South Park, Trey Parker and Matt Stone, are big Nuggets fans and have made that evident by incorporating the Denver Nuggets into the TV animated sitcom from time to time.

The Nuggets have never been the best team in the league in the 5 decades they’ve played in the NBA. Despite not excelling as a team, the Denver Nuggets did have a few players that really left it all on the court during each game. Today, there are 6 former players who have had their numbers retired by the team, including:

The Nuggets also wanted to recognize the incredible dedication of Doug Moe, who spent 10 years leading the Denver Nuggets between 1980 and 1990. The #432 was retired in his honor, with the number representing how many wins the Nuggets locked down during regular season play while Moe was at the helm.

Although the Denver Nuggets have yet to win an NBA title, the team has still had some amazing players through the years, many of whom have been inducted into the NBA Hall of Fame. A few of the most notable Hall of Famers include Alex English, Dan Issel, Dikembe Mutombo, and David Thompson.

Although the Denver Nuggets have yet to win an NBA title, the team has still had some amazing players through the years, many of whom have been inducted into the NBA Hall of Fame. A few of the most notable Hall of Famers include Alex English, Dan Issel, Dikembe Mutombo, and David Thompson.

In 2013, the Nuggets had one of their best seasons in the franchise’s history; however the team still failed to win the NBA championship. Since then, the team has continued to play and have strong seasons. Nikola Jokic and Jamal Murray form a young core that is already piling up wins.