The Chicago Bulls are most famously known as the team for which Michael Jordan played. During Jordan’s time as a Bull, the team won 6 NBA championships, cementing their status as one of the greatest basketball franchises of all time.

The Chicago Bulls franchise was established in 1966 and won 33 games their first season (this was a record amount of wins for any new NBA franchise at the time). The Bulls qualified for the NBA championships in both 1969 and 1974. At that time, the team was led by players Bob Love, Chet Walker, Jerry Sloan, and Norm Van Lier. After those players left the team in the mid 70s and early 80s, the Bulls experienced their first draught winning multiple seasons. In 1984, the team was middle of the pack and that’s when their luck changed.

That year, the Bulls drafted a rookie from North Carolina by the name of Michael Jordan and the rest is history. Jordan won the NBA Rookie of the Year award in 1984 and the team went to the playoffs for the following 14 consecutive seasons. While the Bulls made the playoffs, they didn’t win a championship until 1991 against the LA Lakers.

Jordan proceeded to take the Bulls straight to another stratosphere, winning 6 NBA championships in 8 years. That is pure dominance right there. From 1993 to 1994, Jordan retired briefly after losing interest in basketball. However, his hiatus did not last long and he returned to the Bulls in 1995.

Other key players at that time were Dennis Rodman and Scottie Pippen, who were Jordan’s right hand men and also helped the Bulls soar to victory.

In 1997, all three players left the team permanently. Jordan retired, while Rodman and Pippen went on to play for other franchises.

The Chicago Bulls have won 6 NBA championships in their history - and all 6 of those championship wins took place in an 8 year span. How did they win so many championships over such a short period of time? Simply put, the Bulls had a few star players that continually brought the team to victory.

Their first NBA championship title was in 1991 against the LA Lakers. Michael Jordan scored 31 points which was an NBA all-time record for points scored by a single player in an NBA game.

In 1992 the Bulls defeated the Portland Trail Blazers and in 1993, the Bulls took down the Phoenix Suns with Jordan scoring 32 points in a single game.

In 1996, a trio who would become famous and beloved by Bulls fans consisting of Dennis Rodman, Scottie Pippen, and Michael Jordan defeated the Seattle Sonics in the NBA championship. In 1997 and 1998, the Bulls won again against Utah Jazz.

Michael Jordan was known for his consistency on and off the court and so it is fitting that the Chicago Bulls logo has also stayed consistent since the team's inception in 1966.

The Bulls’ logo is a simple and straightforward logo featuring a red bull with its game face on and the team’s name in black above it. 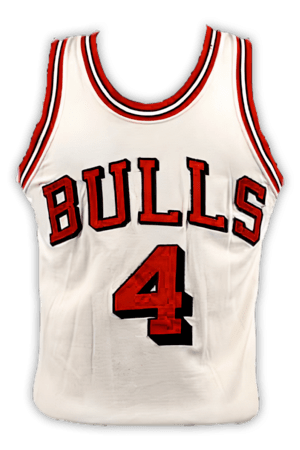 Similar to the Bulls’ logo, the team’s jersey has seen minimal updates since 1966. From 1966 to 1973, the team wore a white jersey with red accents, red block letters and numbers. 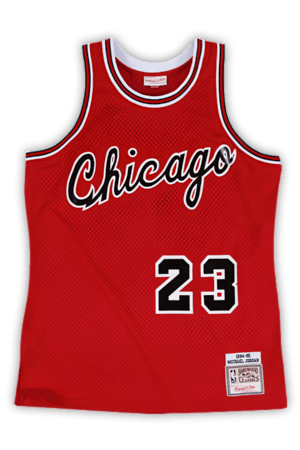 In 1973, the team updated their jersey a touch by making the jersey red, updating the name of the team to a cursive font and moving the numbers from the center of the jersey to the bottom right corner. 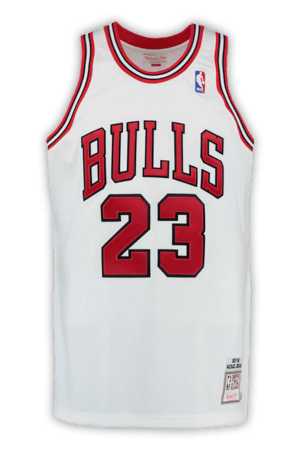 From 1985 on, the Bulls returned to their tried and true white jersey with red accents and block letters and numbers.

The only difference between this current jersey and the first jersey the team wore is a slight change in font.

The Chicago Bulls have quite a few celebrity fans. A few of the people you’re likely to run into at a Bulls game include former President Barack Obama, Kanye West, Oprah Winfrey, Bill Murray and Vince Vaughn.

When you think of the Chicago Bulls, there are probably a few specific players that you think of first. As of now, 4 of those household names have had their numbers retired as an ode to their unmatchable success on the court. These players include:

Through the years, the NBA has also inducted a few Chicago Bulls into the Hall of Fame. Nate Thurmond, George Calvin, Chet Walker, Guy Rodgers, and Artis Gilmore are among the names you’ll find in the Hall of Fame; however, we’d be remiss it we didn’t give a bit of extra history on Michael Jordan, Scottie Pippen, Dennis rodman, and their coach Phil Jackson.

Michael Jordan has come to be known as the greatest basketball player of all time and the first true NBA superstar. Due to Jordan’s quick feet, grace, poise, and powerful slam dunking superpowers, people began to say that he was “God disguised as Michael Jordan.”

Jordan led the Chicago Bulls to victory 6 times in 8 years and has won titles such as Rookie of the Year, NBA MVP, NBA All-Star, and more. He also holds the highest scoring average in the NBA at 30.1 points per game.

Jordan was originally from Wilmington, North Carolina and went on to play basketball at University of North Carolina at Chapel Hill. He was named the College Player of the Year his sophomore year at UNC and was drafted by the Chicago Bulls after his junior year in 1984. That same year, Jordan also won a basketball gold medal in the Olympics.

Jordan was the addition that the Chicago Bulls needed to bring the team to victory, but when the Bulls drafted Scottie Pippen, the two players became unstoppable together. The duo, coached by fellow hall of famer Phil Jackson, led the Chicago Bulls to a three-peat NBA Championship victory; that is, winning the finals for three consecutive seasons.

Jordan then retired from the NBA and pursued baseball instead. In 1995, however, Jordan returned to the NBA to play for the Bulls once again.

This time, the Bulls had a new player on the team by the name of Dennis Rodman who was a defensive phenomenon. Rodman joined the Pippen-Jordan duo to become an unstoppable trio that led the Bulls to win yet another three-peat. Jordan went on to retire for good and became a majority owner of the Charlotte Bobcats.

After Jordan, the Chicago Bulls have yet to win another NBA championship although they’ve come close a few times. The team has, however, returned to the playoffs a few times thanks to new basketball superstar, Derrick Rose.

Even without any new NBA trophies since Jordan’s retirement, the Chicago Bulls will go down in history as one of the greatest NBA franchises of all time.