In the 46 years since Utah Jazz players first laced up their shoes for an NBA game, the team has yet to walk away with an NBA Championship. So there’s a pretty good chance that you don’t know much about the Utah Jazz, a team that once made itself home in New Orleans. You’re about to learn the history of the Utah Jazz, including its beginning years back in New Orleans, the logos and jerseys over the years, and where the team stands today.

The Utah Jazz was actually first formed back in 1974 in New Orleans, Louisiana with the assistance of Sam Battistone (owner of Sambo’s restaurants) and Fred Rosenfeld (a lawyer).

The team would earn the name “Jazz” after a team name competition that saw over 6,000 submissions. Jazz was picked because it supposedly meant “collective improvisation” and was a nod to the history of jazz music in New Orleans.

Despite having a decent stream of funds at first, the New Orleans Jazz struggled immensely to earn a winning record. The team barely clinched a 39-43 record in the 1977 to 1978 season and its star player, Pete Maravich, rarely saw playing time due to persistent injuries. Yet, the team struggled to fill its rosters with veteran players on more than one occasion. The Jazz were unsuccessful in their quest to draft future Hall of Famer Magic Johnson early on in his career.

As a result of little income, the owners of the New Orleans Jazz looked to relocate elsewhere in the country. Salt Lake City, Utah was ultimately chosen due to low cost and a general boom in basketball fans in the area thanks to the former Utah Stars of the American Basketball Association. Despite the move from New Orleans, the Jazz held onto the Mardi Gras-inspired team colors of purple, green, and gold.

The team continued to struggle once it moved to Utah, even with a roster of skilled players like Adrian Dantley. The Utah Jazz, yet again, got the short end of the stick on a trade deal and ended up missing out on yet another future Hall of Famer, Dominique Wilkins. The team eventually turned around and claimed the Midwest Division title as well as the first winning record in the 1983 to 1984 season.

The Utah Jazz, formerly the New Orleans Jazz, has seen its fair share of logos over the last 46 years. There’s been a wide range of colors, designs, and patterns over the course of the years.

When the New Orleans Jazz officially moved to Utah in 1978, the team kept the same logo, only replacing New Orleans with Utah and adopting a bit of a darker color scheme.

In 1996, the Utah Jazz logo took a swift turn toward the geographic features seen in Utah. The logo consists of a brand new collection of colors with a brown outer circle and a mountain range melting into a basketball in the interior.

The 2004 logo change wasn’t all that different than the last but shifted more toward blue and purple colors instead.

The 2010 logo closely resembles the two previous logos, with an introduction of yellow highlights as well as hints of green.

In 2016, the Utah Jazz paid homage to its beginning years by reactivating the first logo associated with the team. This logo is practically the same as the first few logos, yet uses darker coloring and replaces the purple with dark blue. 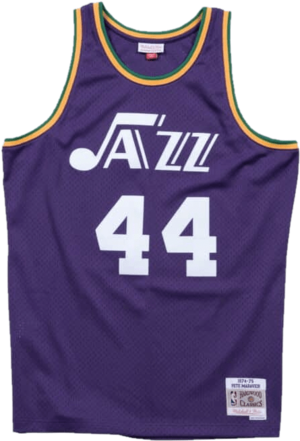 While the Jazz were still in New Orleans, they sported a single jersey. The jersey was a unique, deep purple shade. “Jazz” was written in 3D letters, with the letter “J” being stylized as a music note. All letters and numbers were written in white and the borders of the jersey were yellow and green, with the whole jersey sporting Mardi Gras colors 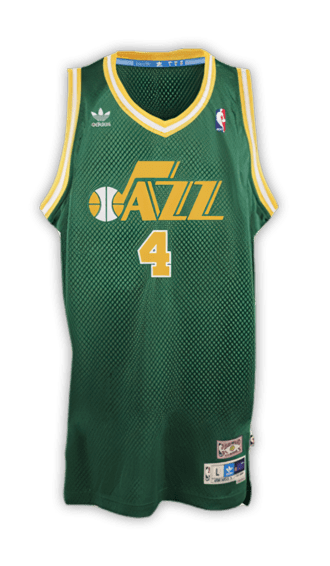 The first jersey used when the team played in Utah in 1981 was mostly green and had the jazz note and basketball logo in the center. 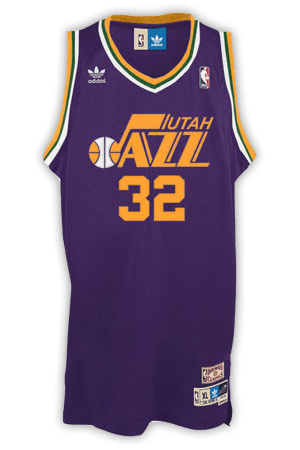 By 1984, the jersey looked exactly the same but swapped the green color for a dark purple. 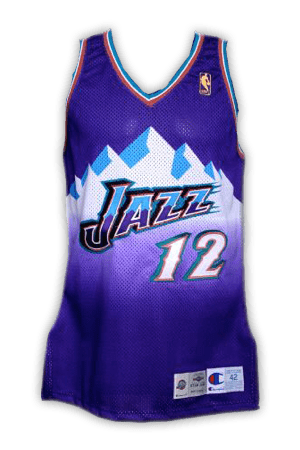 When the Jazz switched to the mountain range logo in 1996, the uniform shortly followed. This jersey was a purple color with a mountain range behind the team name.. 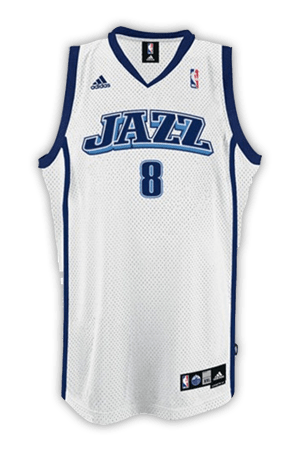 2004 was a much simpler time for Utah Jazz jerseys. The team adopted an all-white jersey with blue accents, simply having “Jazz” printed in all capital letters at the center. 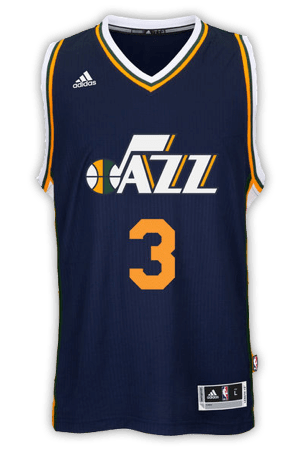 In 2010, the Utah Jazz began transitioning to a more old-school look. That explains the use of the Jazz’s first logo and a dark blue jersey. 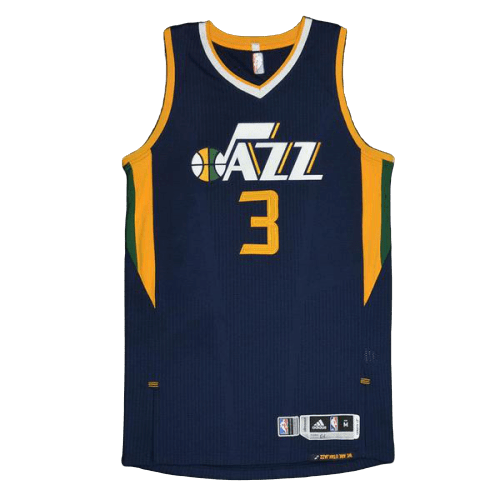 The 2016 jersey saw minor updates but isn’t much different than the last.

Due to arena availability and a shift to Utah, the Jazz have played in six arenas since the team began in 1974. In New Orleans, the team played at the Loyola Field House and the Municipal Auditorium before moving to the Louisiana Superdome. Once in Salt Lake City, the Utah Jazz would play in the Salt Palace between 1979 and 1991 before eventually settling down at the Vivint Smart Home Arena.

The Utah Jazz don’t have many celebrity fans as of late, but many believe the musician Macklemore is a Jazz fan, as he has been seen several times sporting a Gordon Hayward jersey in the past.

For the Utah Jazz, the 1970s and 1980s brought some of the best players that the franchise would ever have on their roster. That’s exactly why the team eventually decided to retire 7 numbers worn on the jerseys of Jazz standouts. The retired jerseys include:

The Jazz also like to thank the most significant members of their franchise by retiring jerseys in their honor. No. 1 was retired for Frank Layden, head coach for the team throughout the 1980s, No. 9 for 24-year team owner Larry H. Miller, and No. 1223 for the coach that stepped in for Layden in 1988, Jerry Sloan.

Despite not having any NBA Championships and only two finals appearances, the Utah Jazz currently have 8 players and 1 coach represented in the Basketball Hall of Fame. That includes 19-year Jazz veterans, Karl Malone and John Stockton, who each played over 1400 games with the team.

The Utah Jazz has had a troubled history as a team, unable to bring home an NBA championship when in New Orleans and Salt Lake City. However, the Utah Jazz captured the conference championship twice between 1996 and 1998. The team would, unfortunately, fall to the Chicago Bulls 2-4 in both NBA Finals.

Despite having a less than impressive first few years as a team, the Utah Jazz eventually found its niche in the late 1980s with the assistance of players like Karl Malone and John Stockton. The two played for the Utah Jazz for 19 years during their careers, each one becoming an NBA All-Star on several occasions and locking in 1,400+ games with the Jazz. Malone, specifically, would net nearly 37,000 points during his career.