The Dallas Mavericks are a professional basketball NBA franchise based in Dallas, Texas. The team has an interesting history starting with their expansion into the NBA in 1980.

The Dallas Mavericks joined the NBA as an expansion team in 1980 when Don Carter and partner Norm Sonju convinced the NBA to bring a team to Dallas for $12.5 million. Carter wanted to bring an NBA franchise to Dallas as a gift to his wife, Linda, who had played basketball growing up and loved the sport.

The Mavericks’ first few years were a bit rocky and the team struggled to make it into the playoffs. Finally, in 1984 the team led by Mark Aguirre, Derek Harper, and Rolando Blackman made it to the playoffs for 5 consecutive years. But by 1990, all their star players had left, causing an eight year losing streak.

In 1996, the Mavericks drafted Steve Nash and Dirk Nowitzki, who helped improve the team’s track record, though they still ranked 10th (out of 15) in the Western Conference.

That same year, Ross Perot Jr. purchased the franchise for $125 million and then in 2000, Mark Cuban bought the Mavericks for $285 million. One of Cuban’s first moves as the new owner was to upgrade the Maverick’s training facilities so that more players would want to join the team. The Maverick’s consistently placed top in the Western Conference from 2000 - 2010 and then in 2011, the team finally won their first NBA Championship led by Dirk Nowitzki.

Their victory began to fade in 2013 when they did not make it into the playoffs for the first time in 12 years. In 2017, the team had their worst season in history and in 2019, they finished last in their division.

In 2010, Perot still owned 5 percent of the Mavericks and sued Cuban claiming that the team was insolvent, or unable to pay their debts. However, Cuban won the lawsuit by asserting full ownership of the team and claiming that Perot was simply seeking money he had lost. The lawsuit was dropped in 2011.

The Dallas Mavericks have won one NBA final in 2011. They defeated the Miami Heat, who were led by LeBron James, Dwyane Wade and Chris Bosh.

The Dallas Mavericks logo has seen minimal changes since 1980.

The first logo was used by the team from 1980 to 1993 and featured a green basketball, the letter M with a cowboy hat in navy blue and the team's name to the right in navy blue with green around the text.

In 1993, the Maverick’s updated their logo by simply removing the green from around the team’s name. Otherwise, their logo remained the same until 2001 after the franchise had been purchased by Mark Cuban.

In 2001, the Maverick’s new logo was totally different from the team’s original logo. The new logo featured a shield with a horse head and a half moon. The logo also was just blue, grey, black, and white. This has been nearly the team’s logo ever since.
The Mavericks logo saw some minor changes in 2018, only slightly darkening the grey and blue shades, as compared to the previous version. 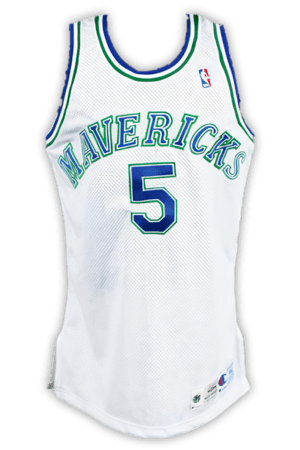 In 1980, the Maverick’s wore a simple white jersey with blue accents. “MAVERICKS” was written in all capital blue letters and a large player number was placed below. 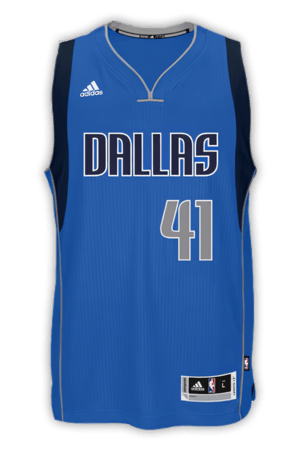 After Mark Cuban purchased the franchise in 2000, the team received another update to their jersey bringing the design into the 21st century. The team wore two different hues of blue with silver and white lettering. The jersey has remained relatively unchanged since 2001, with changes only being made to the away jersey (different shades of blue).

The Mavericks played at the Reunion Arena from 1980 to 2001. Reunion Arena was built in 1980 for $27 million and was named after a commune from the mid-19th century, La Reunion.

In 2001, the Mavericks moved into the American Airlines Center located in downtown Dallas, Texas. The Arena was built for $420 million.

Aside from the obvious famous fan and owner, Mark Cuban, the Mavericks have their fair share of name-drop worthy fans like Jessica Simpson, David Hasselhoff, and Tony Romo. At any given time, it’s possible to run into one of these stars at a game.

Having your jersey retired is one of the biggest honors in sports, because it shows how much your team appreciated and valued your contributions. Today, the Mavericks have retired 3 numbers of former players, including:

It’s only a matter of time before franchise legend Dirk Nowitzki’s number is up in the rafters. After Lakers standout Kobe Bryant tragically passed away in a helicopter accident in January 2020, Mark Cuban (the owner of the Mavericks) made a decision: To have the #24 retired in honor of Bryant, who never played for the Dallas Mavericks, yet changed the game of basketball forever.

Because the Mavericks are such a young team and have only won one championship, they have a small group of players who have really stood out as real MVPs and been inducted into the NBA Hall of Fame. A few of these players include Adrian Dantley, Alex English, Jason Kidd, Steve Nash, and Dennis Rodman. Most of these players only played a few seasons with the Mavericks, but Kidd and Nash were true Mavericks with Kidd playing for eight seasons and Nash playing for six seasons with the team.

Since the Mavericks championship victory in 2011, they have returned to the playoffs a few times but have mostly struggled to maintain their champion status, however Luka Doncic and Kristaps Porzingis represent a bright future. Mark Cuban is still the majority owner.

What do you think? Is it time for the Mavericks to make a comeback and win another NBA title? Let us know!