In 1987, Marv Wolfensen and Harvey Ratner were on a quest to bring professional basketball back to Minnesota after the Lakers left in 1960. The NBA approved a brand new team in 1989, allowing the public to get involved and vote on a team name. When given the choice between the finalists, the Timberwolves and the Polars, the Timberwolves won by an overwhelming majority. The team name pays homage to the massive population of timberwolves in the state.

It only took the Timberwolves three games to see their first franchise victory against the Philadelphia 76ers in the inaugural 1989 season. In fact, the first season saw over 1 million fans attend home games, an NBA record despite the team’s less than impressive 22-60 season. The first six years as a team saw 6 different head coaches and the lack of consistency ultimately led the team to struggle to earn even 20 wins on a seasonal basis.

With a struggling team, the two original team owners sought to sell the team in 1994 and a possible relocation to New Orleans, Louisiana. However, local billionaire Glen Taylor stepped in and purchased the team that same year. He would go on to become an owner of the Minnesota Lynx of the WNBA just 5 years later. The team’s losing trend took an unexpected turn with the drafting of a recent high school graduate by the name of Kevin Garnett in 1995.

Team management continued to fill the roster with more skilled players, including the likes of Stephon Marbury and Tom Gugliotta. The trio (Marbury, Gugliotta, and Garnett) helped lead the team to an impressive 40-42 record during the 1996 season and secured the first playoff appearance in the history of the Timberwolves. As the seasons progressed, Garnett’s playing style helped to lead the Timberwolves to unexpected success with 23 points per game.

The team logo for the Minnesota Timberwolves has changed a total of 4 times during the history of the team.

Between 1990 and 1995, the team logo included a blue and white wolf inside of a grey and blue basketball. The basketball was surrounded by a green outline and the name “Minnesota Timberwolves” was scrawled beneath the logo.

The 1997 season brought a brand new updated logo. This one included a wolf peeking above a forest line with the entire team name written below, the name “Timberwolves” in a spooky font.

In 2009, only minor changes were made to the previous logo. The front used became a little more legible and the wolf and forest took on a more modern and digital appearance.

The current logo was developed in 2017 and is somewhat similar to the first logo that the Timberwolves ever used. A majority of the design includes different shades of dark blue, with a drawing of a wolf howling at the North Star in the center of a basketball. The name “Minnesota Timberwolves” surrounds the interior circle. 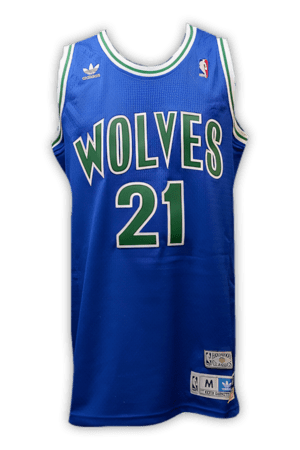 The first jersey used between 1989 and 1996 was mostly blue with the name “Wolves” in all capital green letters with a thin white border. 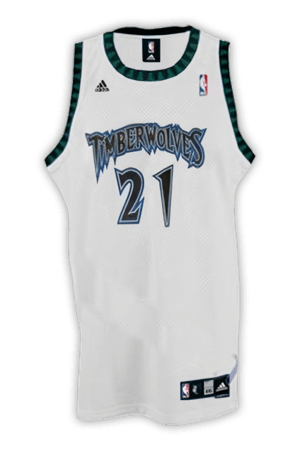 The 1996 jersey used a very simi lar spooky font, very similar to the one used in the 1997 logo for the team. The jersey is mostly white with black lettering and blue outlines. This jersey included the whole name “Timberwolves” instead of just “Wolves.” 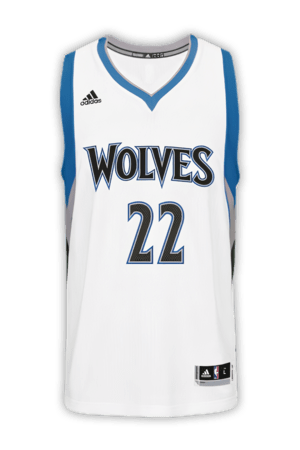 The jersey above was first worn in 2008. It was mostly white with the name “Wolves” on the front in somewhat creative fonts. The lettering was black and there was a blue border for all letters and numbers. 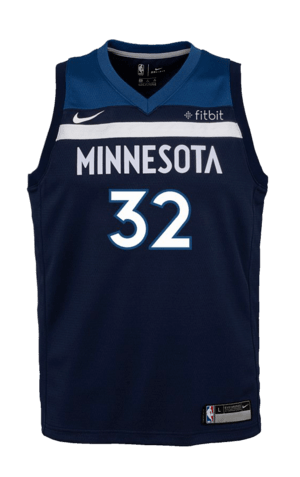 The 2017 Wolves jersey is still worn today. It has a white stripe up top with a white stripe in between. “WOLVES” is written in all capital letters in the center of the jersey, boasting a clearly-visible player number below. A Fitbit logo can be seen in the stripe, opposite the Nike logo. 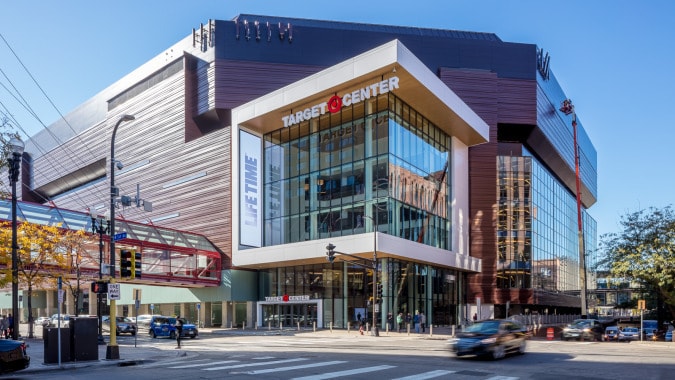 The Minnesota Timberwolves have been relatively consistent when it comes to the arenas in which they’ve called home. The team spent a single season at the Hubert H. Humphrey Metrodome between 1989 and 1990. Since 1990, the team has laced up their shoes and hit the court at the Target Center.

The Wolves don’t have too much celebrity presence at games, but comedian Craig Kilborn, who was raised in Minnesota, is one of the team’s most recognizable fans.

The Timberwolves don’t have many retired numbers as of now, mostly because the team has only been in the league since the 1980s. Today, the only retired jersey is #2, which was worn by Malik Sealey and retired shortly after he lost his life in an accident with a drunk driver in 2000. The “FLIP” jersey was also retired in 2018, just three years after Timberwolves head coach Flip Saunders passed away from Hodgkin's lymphoma.

In addition to just two jerseys formally retired by the Timberwolves, only have one former player in the Basketball Hall of Fame. Kevin Garnett was officially inducted in 2020 after spending a total of 14 seasons with the team (1995 to 2007 and 2015 to 2016). During his tenure with the Timberwolves, Garnett played in 970 games and averaged 22 rebounds and 19.8 points per game. He was also named an NBA All-Star 10 different times.

The Timberwolves waited until 2004 before securing their first appearance in a conference series. Though they ultimately lost 4-2 to the Los Angeles Lakers (a former Minnesota team), it would be the best season for the Timberwolves, to date. Impressively enough, the Timberwolves saw action in eight consecutive playoffs between 1997 and 2004.

The Timberwolves traded Kevin Garnett to the Lakers in 2007 and in return received 5 players. During his first season with the Lakers, Garnett was able to capture the coveted NBA Championship. Yet, the Minnesota Timberwolves again lucked out when they drafted Kevin Love to the team in 2008, becoming a leader on the court during his first few seasons.

Since then, the Minnesota Timberwolves have struggled to prove successful in postseason play. Their playoff appearance in the 2018 season surprised fans after a 13-year gap between their last playoff game. Garnett returned in 2015 and put in another 2 years with the Timberwolves before retiring. Since 2004, the Timberwolves have had trouble maintaining a winning record, stooping as low as a .183 record in 2010 and .195 in 2015.