If it weren’t for a couple of dedicated businessmen based out of Orlando, Florida in 1985, the professional basketball team now known as the Orlando Magic wouldn’t even exist. The Orlando Magic are known for having previous star-studded rosters, though unable to walk away from an NBA season with a championship ring. Now, it’s time to learn about the complicated history of the Orlando Magic.

Back in 1985, an Orlando businessman by the name Jim L. Hewitt linked up with the then-General Manager of the Philadelphia 76ers, Pat Williams. The two planned to bring professional sports to the Orlando area in the form of an NBA franchise. There was a good amount of pushback, as another Florida basketball team, the Miami Heat, were also trying to make an entry into the NBA. For a cool $32.5 million, the Orlando Magic were born.

The team owners allowed the locals in Orlando to select the team name. The winning name, the Magic, was inspired by the nearby Walt Disney World and the Magic Kingdom. Under the leadership of head coach Matt Guokas, the brand new Orlando Magic captured a surprising victory over the 1988 Champions, the Detroit Pistons, in an exhibition game. However, the team ended its first season with a less than impressive 18-64 record.

By the 1990 season, the team had returned with a vengeance with the assistance of Most Improved Player, Scott Skiles, and All-Rookie First-Team nominee, Dennis Scott. The following year, the Orlando Magic were sold to Amway for a whopping $85 million, though the team posted another poor season record (21-61) as a result of persistent injuries. Yet, the team took a surprising turn for the better thanks to the number one draft pick in 1992.

When 7-1 Shaquille O’Neal hit the court with the Orlando Magic, the team was able to clinch an unexpected 41-41 record. He was then named an All-Star, a feat last achieved by Michael Jordan. The addition of Anfernee "Penny" Hardaway joined with a thriving Shaq led the team to a 50-32 record, paving the pathway for success. The team earned its first division championship in 1995 and made it to the NBA finals before falling to the Houston Rockets in just 4 games.

Unfortunately, the team saw a stream of inconsistency due to the constant hiring and firing of coaches. The inexperienced Orlando Magic, led by Coach Doc Rivers in 1999, helped to prove that hard work and dedication could beat years of experience on the court. That all changed during the 2000 draft, where the Orlando Magic brought on veteran players Tracy McGrady and Grant Hill.

The logos for the Orlando Magic have only changed slightly since the team was established in the 1989 season.

The first logo lasted a solid 10 years until 2000. The blue and grey logo stylized the “A” in Orlando and Magic as a grey star and includes a blue basketball swooshing.

Between 2001 and 2010, the Magic logo was made to look more modern. The basketball was moved to be underneath the team name and the stars in the letters became more prominent.

The final and current logo was released in 2011. It removed the stars replacing the letter “A” and makes use of cleaner and neater fonts. 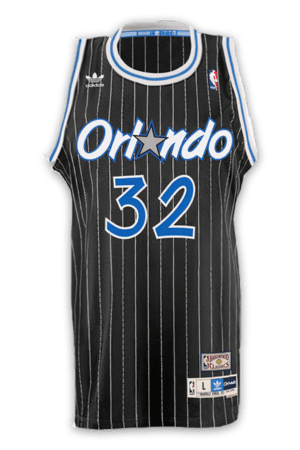 Between 1988 and 1998, Magic players sported a mostly black jersey with white vertical pinstripes. The name “Orlando” is in white lettering with blue borders and replaces the “A” with a grey star, just like the logo at the time. 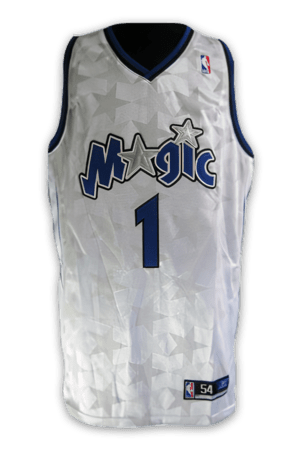 Between 1998 and 2003, the players wore a mostly white jersey that mimicked the logo at the time. There are faint grey stars in the background of the jersey and “Magic” is now on the front instead of “Orlando.”

From 2003 to 2008, the Magic wore a mostly white jersey with a neat blue lettering and blue thin stripes down the side. 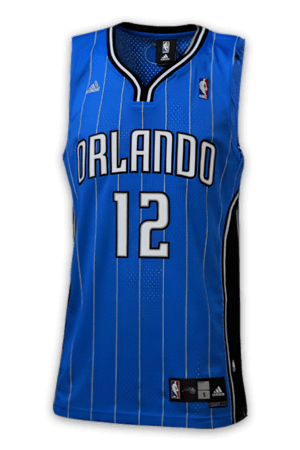 This Magic jersey was created in 2008 and is mostly blue with thin grey pinstripes aligned vertically. The name on the front is again “Orlando,” with all lettering being white and lined with a black border. 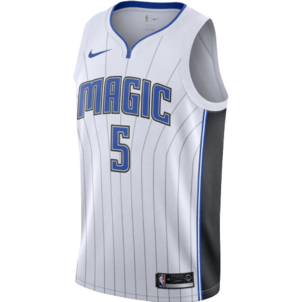 The latest magic jersey is slightly altered with curved lines on the shoulder. 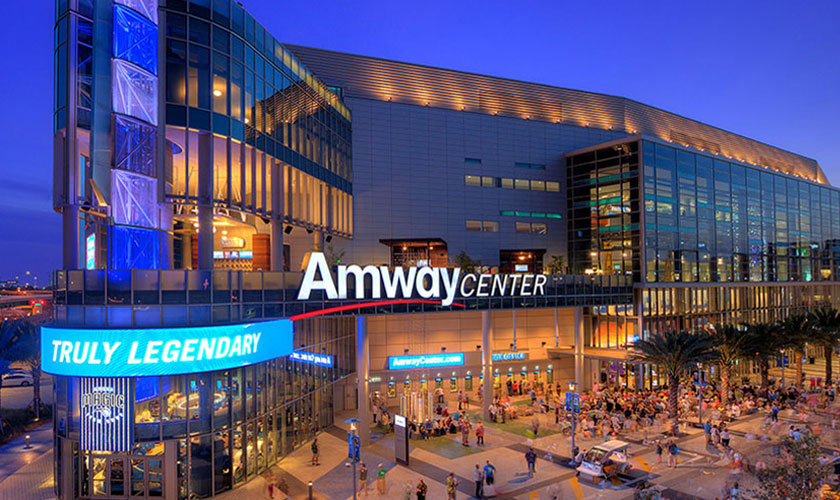 The Orlando Magic have only played in two different stadiums since the team began in 1989. The first stadium used was the Amway Arena between 1989 and 2010. It went through frequent name changes, including the Orlando Arena, TD Waterhouse Centre, and then Amway Arena. The team has played at the Amway Center (different from the Amway Arena) since 2010.

The Magic don’t have a huge celebrity following, but many consider golf superstar Tiger Woods to be the team’s most famous fan.

There are probably two reasons the Orlando Magic have yet to retire the numbers of any former players. First, the team has only been in the league a little over 30 years and it was rare for players to spend more than a few seasons with the team. Second, many players that ended up being NBA All-Stars later on in their careers were unable to prove themselves on the court while a member of the ever-struggling Magic, a team with zero championships to its name.

The Magic did, however, retire the #6 in honor of loyal Orlando fans. The #6 represents the basketball term, the “sixth man.”

Though most former players didn’t solidify their careers while with the Magic, 5 former players have earned their spot in the Basketball Hall of Fame. Representatives from the Magic include Grant Hill, Patrick Ewing, and Dominique Wilkins. There’s also Tracy McGrady, who averaged over 28 points per game and was named an All-Star 4 times with the Magic, as well as Shaquille O’Neal, who averaged 27.2 points per game in his 4 years with the team.

The 2000s brought the Orlando Magic a series of successes followed by failures. The first significant success was the addition of superstar Dwight Howard. With the help of Howard, the team was able to secure a three-peat in the division championship between the 2008 and 2010 NBA seasons. In 2009, the Magic surprisingly made it to the NBA finals for the second time in franchise history. The team, unfortunately, fell to the Los Angeles Lakers in five games.

In 2012, Dwight Howard was traded to the Los Angeles Lakers, a devastating blow to a team already in its rebuilding years. Despite the loss of such a high-capacity player, the Orlando Magic eventually returned as division championships in the 2019 season.

But the Orlando Magic franchise is littered with several unfortunate trends that have led to failure on and off the court. The team is known to frequently hire and fire coaches as well as trade players at the drop of a hat. Though the team has never proven victorious in the NBA Finals, the Magic have succeeded in seeing the court in 15 different playoffs over 30 years.