The Atlanta Hawks might not be the first team that comes to your mind when you think of the NBA; however, the Hawks have a rich history as one of the oldest teams in the league.

In 1951, the team moved to Milwaukee and was known as simply the Hawks. In 1958, the team was officially known as the St. Louis Hawks and won the NBA championship against the Boston Celtics.

The Hawks have only won one NBA championship; however, they have made it back to the finals multiple times over the years. In 1966, the Hawks drafted Lou Hudson who came to be known as “Sweet Lou.” Hudson was named to the NBA All-Rookie Team and scored 18.4 points per game. He helped the Hawks to sweep through the NBA playoffs; however, they lost the final game to the San Francisco Warriors. Hudson only spent 1 full season with the Hawks before joining the military.

In 1968, the St. Louis Hawks were moved to Atlanta. The move was primarily due to the franchise being sold to Thomas Cousins and Carl Sanders, the former Georgia governor. In 1976, Ted Turner (the owner of the Atlanta Braves and Atlanta TV station WTCG) purchased the Atlanta Hawks franchise.

The Atlanta Hawks have won one NBA championship in their history. In 1958, the St. Louis Hawks defeated the Boston Celtics by one point in the sixth game. Unfortunately, the Hawks have yet to win another championship and the team holds one of the longest dry spells in NBA history for not winning a championship.

In 1957 the Hawks were relocated to St. Louis and received another logo update. The logo was still in line with the hawk and the basketball; however, this time the hawk was wearing a Hawks jersey and carrying the basketball in a way that made him appear to be more like a player and less like a hawk.

Once the team relocated permanently to Atlanta in 1968, the Hawks brought back the red logo and kept the basic “Hawk playing basketball” idea.

In 1972, the Hawks simplified their logo to simply be a Hawk (lovingly referred to as the Pac-Man logo) with the team’s name below.

In 1995, the Hawks reverted back to a more traditional logo again featuring the Hawk carrying a basketball.

In 2015, the Atlanta Hawks went back to their Pac-Man logo which was a fan favorite according to the team’s CEO, Steve Coonin.
“Our fans have been so excited by the return of the iconic Pac-Man logo. This season, we set merchandising sales records for Hawks and Pac-Man gear so it was a natural move to make Pac-Man the primary logo for the Atlanta franchise. The addition of the Atlanta Hawks Basketball Club to the logo is just as meaningful as it speaks to our belief system that an inclusive and welcoming culture to all Atlantans is the only way to truly be a successful franchise.” - Steve Coonin 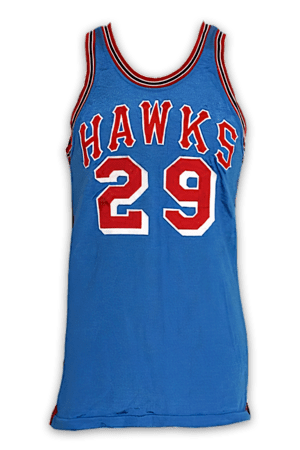 The original Hawks jersey from 1954 appeared similar to the alternate jersey above, but was mostly white instead. It had “HAWKS” written on the front in dark red type with a blue border around the number and team name. 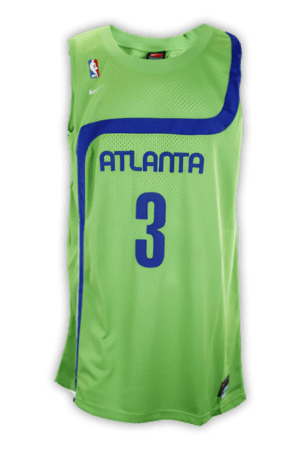 The biggest change that the Hawks’ jersey has seen was from 1970-1972 when the team donned a bright green jersey with a blue zig zag across the front. 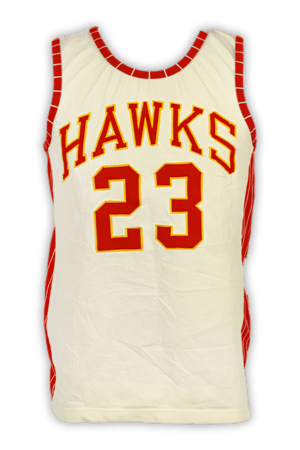 In 1972, the team reverted back to a more traditional jersey that has seen minor changes since then. The jersey was a basic white jersey with red accents and sides featuring the team's name in all capital letters across the chest. 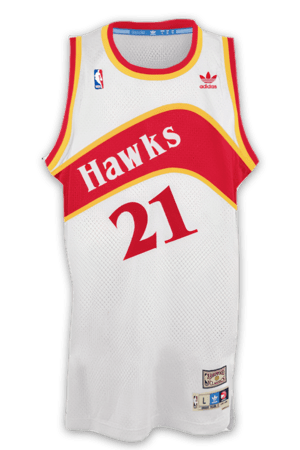 In 1982, the Atlanta Hawks shifted toward a more unique look than the previous jerseys. This jersey was mostly white with a boomerang-shaped red section lying horizontally in the center surrounded by a gold border. “Hawks” was written in white font and angled to the shape with the player number below angled in red. The jersey boasted yellow and red borders throughout. 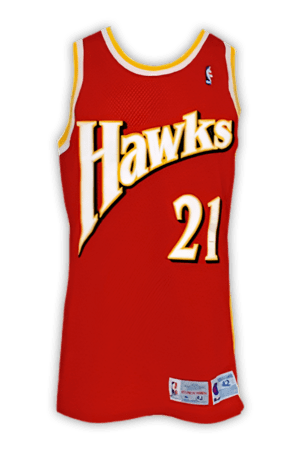 The jersey worn from 1992 to 1995 kept the same color scheme from the previous jersey. This jersey, however, had “Hawks” written at an angle “H” being far larger 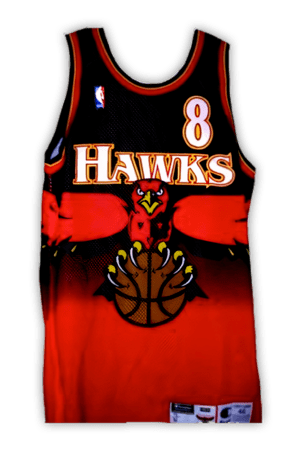 The brand new jersey in 1995 brought on a brand new Atlanta Hawks logo. This jersey had “HAWKS” written in all caps in red with yellow borders. The player number was squeezed into one of the jersey’s top corners. And the new logo, a red and black hawk clenching a basketball within its talons, took over the majority of the jersey’s center area. 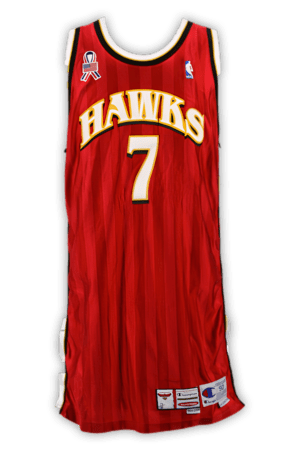 The 1999 Hawks jersey simplified the previous jersey. This jersey removed the large hawk and basketball logo. Instead, “HAWKS” was added in all red capital letters with a yellow border. The player number was moved directly below the team name and was far larger than the previous jersey. Red vertical stripes were added to the side of this Hawks jersey. 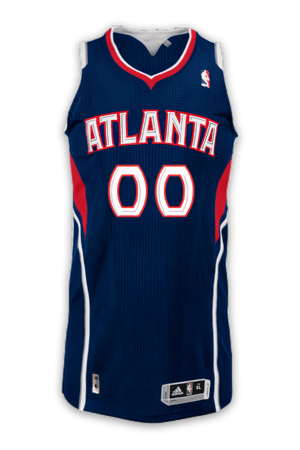 The 2007 Hawks jersey was as modern as they came. The jersey was mostly white, used an embossed black lettering to spell out “HAWKS” with a red border, and had the player number printed large in black underneath. 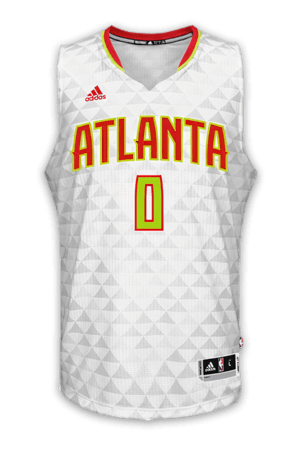 In 2012, the Atlanta Hawks re-imagined their logo to feature the same green from 1970 and the team’s classic red and white color combination. The textured primarily white jersey is still in use by the team today. 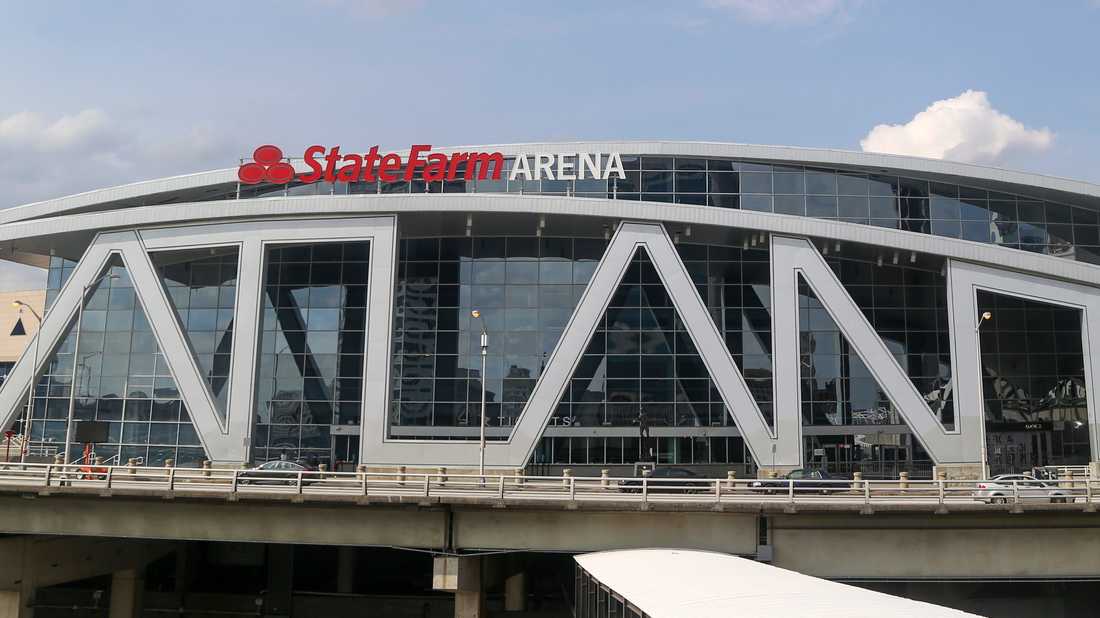 For a team that has moved from city to city throughout its history, the Hawks have also resided in a few different arenas throughout the country. In the 1940s when the team was known as the Tri-Cities Blackhawks, they called the Wharton Field House home. Upon their arrival to Milwaukee in 1951, they played at the Milwaukee Arena.

From 1958 to 1968, the St. Louis Hawks played at the St. Louis Arena before making their permanent home in Atlanta. Upon arriving in Atlanta, the Hawks made their home at the Alexander Memorial Hall, which they shared with the Georgia Tech basketball team for five years. In 1972, the Atlanta Hawks moved into the 16,500 seat Omni arena. In 1999, the Hawks moved into the Phillips Arena which went on to be renamed as the State Farm Arena where they still play today.

Although the Atlanta Hawks have yet to win a second NBA championship since their first win in 1958, they have still managed to maintain quite a fan following - including a few famous fans. The next time you’re at a Hawks game, you’re likely to run into Bow Wow, Ludacris, Tameka Harris, Third Day, Lil’ Jon, Carol Costello, or even Big Boi.

With a team history spanning over five decades, it’s no surprise that at least a few former Atlanta Hawks players changed the franchise for the better. In return for their dedication on the court, 5 Hawks superstars have had their numbers retired forever, including:

Throughout the Hawks’ time in Atlanta, they drafted a few incredibly notable players. In 1982, the Hawks selected Dominique Wilkins who became known as the “Human Highlight Film” because of his impressive slam dunks. Although the team was able to win quite a few games throughout Wilkins’ time on the team, they were never able to win a championship.

In 2014, the team won 60 games in one season however they lost to the Cleveland Cavaliers in the finals. What do you think? With Trae Young now the face of the franchise, the Hawks have a lot of work to do to win their second title.