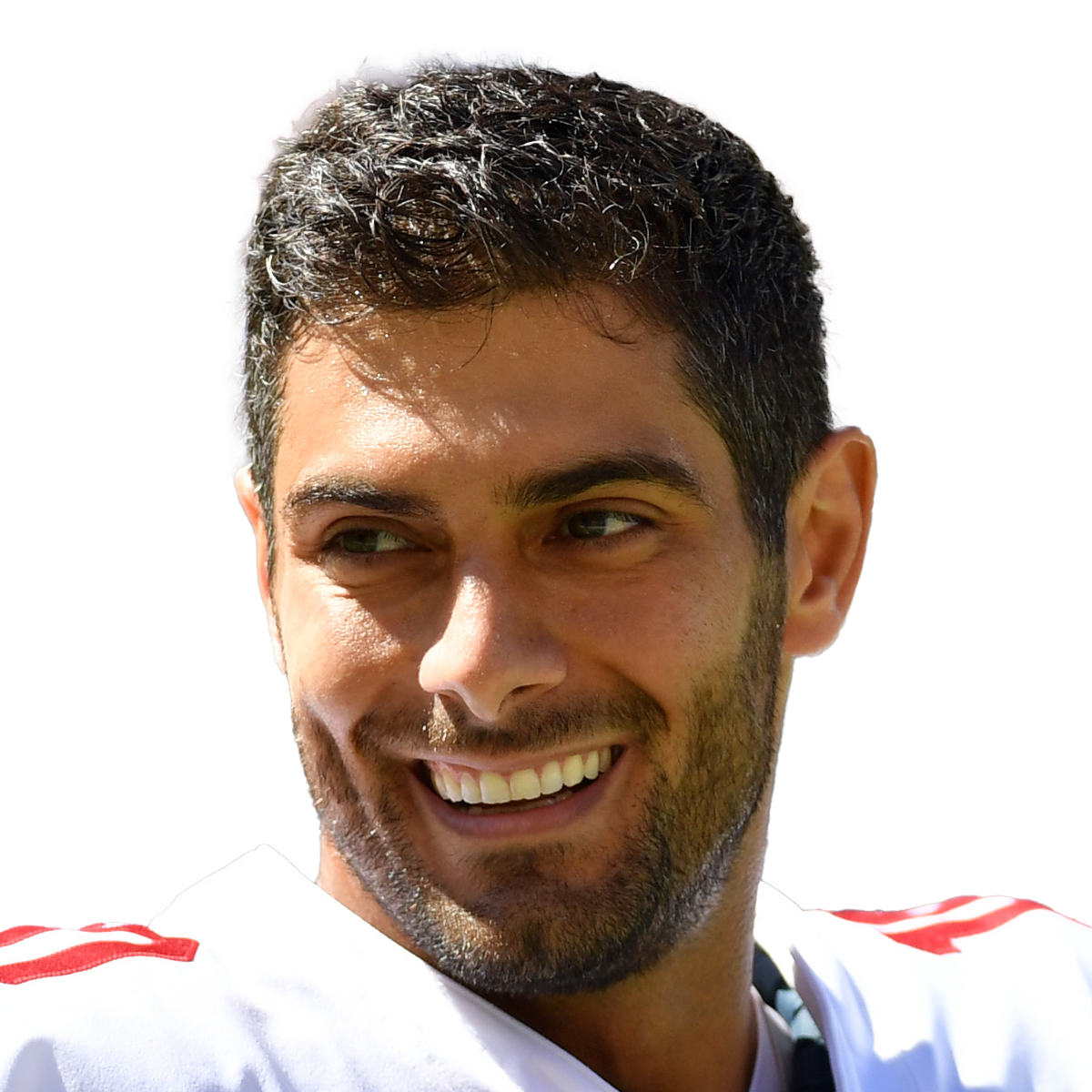 Jimmy Garoppolo is an American football quarterback for the San Francisco 49ers in the NFL.

After a quality career at Eastern Illinois, Garoppolo was drafted in the second round of the 2014 NFL Draft by the New England Patriots.

As Tom Brady's backup for most of his tenure, he sparsely played but showed very promising flashes when occasionally called in to duty during Brady's suspension.

In October 2017, Garoppolo was traded to the 49ers for a second-round selection. Garoppolo proceeded to win his first five games under center with his new team.

In 2018, Garoppolo signed a massive five-year, $137.5 million deal with the 49ers. Unfortunately, his season ended with a torn ACL.

Garoppolo. returned better than ever, leading the 49ers to their first 8–0 start since 1990. He went on to lead them all the way to the Super Bowl but lost after a fourth-quarter comeback from Patrick Mahomes and the Chiefs.

Garroppolo was a quarterback and linebacker in high school, and played in 19 games at quarterback during his junior and senior seasons, passing for 3,136 yards and 25 touchdowns.

Jimmy Garoppolo was a solid four-year starter for Eastern Illinois. He was very durable, passing for 13,156 yards and 118 touchdowns throughout his college career.

Garoppolo won the Walter Payton Award in his senior season thanks to a sped up offense from now-Syracuse coach Dino Babers, and was also named the 2013–14 OVC Male Athlete of the Year and the 2013 College Football Performance FCS National Quarterback of the Year.

Jimmy Garoppolo was drafted in the second round of the 2014 NFL Draft by the New England Patriots. He signed a four-year, $3.4 million deal.

During Tom Brady's Deflategate suspension, Garoppolo played admirably in his absence. Under the bright Sunday Night Football lights, he completed 24 of 33 passes for 264 yards and a touchdown in a surprising 23–21 Week 1 victory over the Arizona Cardinals.

Once Brady returned, the Patriots brought him back to the bench, before deciding to trade him before his rookie contract expired. The Patriots shipped Garoppolo to the 49ers in exchange for the 49ers' second-round pick in the 2018 NFL Draft.

He won his first 13 games under center in San Francisco, a truly unbelievable feat.

In his second full year with the Niners, Garoppolo led the 49ers to the Super Bowl as the NFC's top-rated team. Unfortunately, a fourth-quarter comeback by Patrick Mahomes quickly ruined San Francisco's 10-point lead.

Garoppolo has a reported net worth over $88 million.

After the 2014 draft, Garoppolo and Patriots signed a four-year, $3.4 million deal

Aside from his salary, he also earned a decent sum from partnerships with brands like Nike, Jordan Brand, Bose and New Era. However, his exact earnings from these deals have not been revealed.

In 2018, Garoppolo signed a $137.5 million deal with the 49ers, at the time the largest contract in NFL history on an annual basis.

Garoppolo has three older brothers who are all very supportive of him. His family is described as very close.

"By making yourself better, that's how you make your team better."

"I like to think I'm pretty close in comparison to Aaron Rodgers. He's very athletic and gets the ball out quickly. He's very knowledgeable of the game, controls the offense totally, and that's something I try to do. Just know the offense inside and out."

"Stay single as long as you can - you'll be married the rest of your life."

He went undefeated as the Patriots starting QB.

He has three brothers who text him when he plays poorly.

He had a crush on Kate Upton.

NFL
5 Most Improved NFL Teams in 2020
Kyler Murray and the Arizona Cardinals got way better this offseason. Here's which other teams could make a big jump in 2020.

NFL
The Dallas Cowboys Will Regret Not Signing Dak Prescott
Sooner or later the Cowboys will realize that they screwed up, but will it be too late?